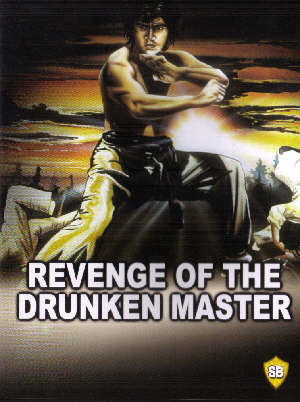 Plot: Drunken Kid (Johnny Chan) is a practitioner of drunken boxing and acupuncture, but he’s an idiot so gets chased around a lot.

I will give “Revenge of the Drunken Master” credit for probably having the best transfer of all the DVDs (so far) in my “Fistful of Kung Fu” box set. Even though actors were often cropped out of the shot, the picture quality wasn’t bad and I actually could understand what everyone was saying. Admittedly understanding the words coming out of their mouths probably made me HATE THIS PIECE OF GODAWFUL SHIT EVEN MORE, but…we’re not quite that far into the review yet. Now before I begin, just because I’m FREAKING THE F@CK OUT at how much I despite this DAMN EATING RAPE MY SENSES bad movie, I don’t think that “Revenge of the Drunken Master” is the worst film ever made…I don’t even think it’s the worst kung fu film ever made…I don’t even think it’s the worst Godfrey Ho (“Scorpion Thunderbolt“) film ever made…Yet somehow “Revenge of the Drunken Master” managed to PUSH MY GODF@CKING BUTTONS and OFF ME THE PISS to such an extent that I’m pretty sure my sentences MAKE WON’T SENSE ANY…even though they’re still more coherent than the storyline of this movie. How did Godfrey Ho confuse me this much when it didn’t even look like he was splicing the footage of unrelated films together? HOW?!

Quite frankly, the plot is such a disjointed catastrophe that part of me wonders if “Revenge of the Drunken Master” was comprised of two different movies…The director is Godfrey Ho and he is known for doing that, but then I realized that if this were true, then I’d have to praise the editing for being so seamless…but scenes often seem to end right before a character begins to say anything, so that can’t be true. It appears that “Revenge of the Drunken Master” was indeed a Godfrey Ho original and that he is merely an inept storyteller. The set-up is simple: Drunken Kid practices acupuncture and drunken boxing, although both of those traits seem to be forgotten around the half way point. He is being chased by a cop (Eagle Han), who is inevitably going to be his reluctant ally even though that storyline is never resolved. Apparently there is a bounty on Drunken Kid’s head for using his acupuncture to make a corrupt Governor laugh, although this is revealed really late into the story. Meanwhile, some bad guys want to annihilate drunken boxing, so hunt down Drunken Kid and his girlfriend, who is presumably the sister of the drunken master…who is the…old guy? I have no idea. There are a lot of minor subplots, including some chick chasing the cop, the chick’s former owner wanting revenge on the cop and Drunken Fist training with an old master who presumably was supposed to be an expert on drunken boxing but it’s unclear…why was he pretending to be a leper? They spend a lot of time on that question. Too bad no time is spent on the answer. Apparently his lesson was just showing the hero a pose and telling him to believe in himself…and what the f@ck was with the finale? “Revenge of the Drunken Master” has such an absurd third act that I almost feel bad for fighting sleep during it. The bad guy uses cymbals as his weapon of choice, wielding them like flying guillotines! The cop sticks his finger in Drunken Fist’s belly button and it gives him super powers…How was this bizarre shit so utterly boring? Because Godfrey Ho doesn’t understand the importance of pacing. Example: Drunken Kid dodging the flying cymbals goes on for too long, ruining a funny idea.

“Revenge of the Drunken Master” produced some of the worst characters of all time. The only person I found myself rooting for was the villain even though “He goes around killing people, for no reason!“, because at least he keeps petting his…gimp…and…yeah…Nothing else I can really add to that. All characters should walk around with their own personal gimps. Drunken Kid is annoying because Johnny Chan is trying his absolute best to be Jackie Chan, except he lacks the charisma, charm and talent. The character is also unbelievably stupid, using acupuncture to make people laugh for NO REASON in the presence of a guy who just said he was looking for someone who could do that. Derp! The cop is even worse because he’s a rapist. He rescues a couple from bandits, but when the old dude is revealed to have no money, he takes the girl instead…did I mention he’s supposed to be a cop? He then rapes her, CAUSING HER TO FALL IN LOVE WITH HIM, and in the next scene he talks about how he wishes to eliminate all evil things in the world. He should start with himself…This asshole then abandons her and acts coldly when she finds him again…Of course, she is portrayed as an annoying idiot, so I can’t really feel bad for her either. Did I mention that this is all played for laughs? “Revenge of the Drunken Master” tries too hard to be funny, relying on obnoxious mugging, lots of noise and offensively terrible situations like what I mentioned above The dubbing at times does have a charm, especially when it starts referencing modern day stuff (Halloween), but it only cushions the hurt in parts. Other times, I was too busy being distracted by the overall awfulness of the racist, misogynistic and toilet humor.

As for the kung fu…it’s not that bad. It’s not really good either. It’s just average. There is a lot of action and you can tell that these people- especially Eagle Han- are talented. But the moves all seem rehearsed…or more accurately, they seem like they belong in a rehearsal before the filming started. Pay attention to the various strikes. One character aims low, but he’s too far to come even close to landing it. Yet it connects because the opponent sticks his arm out to block. There are a lot of missed spots where characters will obviously only hit air, but the receiver will fall down anyway. Nevertheless, I shouldn’t be complaining as the action is the only tolerable aspect of “Revenge of the Drunken Master“. Unfortunately, it drowns amidst a sea of awful comedy and storytelling before promptly being SENT INTO THE ASS OF HELLSHIT! I hated this movie…I hated it so much that it’s making me regret this whole ‘A Fistful of Kung Fu’ box set purchase. The badness of “Revenge of the Drunken Master” outweighs the awesomeness of “General Stone“. That makes me sad….AND SEXING ANGRY! MOO, DAMMIT! MOOOOOOOO!

Nudity: None, but there is rape.

Overall: “Revenge of the Drunken Master” sucks. Just calling it a bad movie is an insult to “South Shaolin Vs North Shaolin“- which deserves that title!