Note: My cat Sammy likely died while I was watching this, making it significantly harder to write this review. 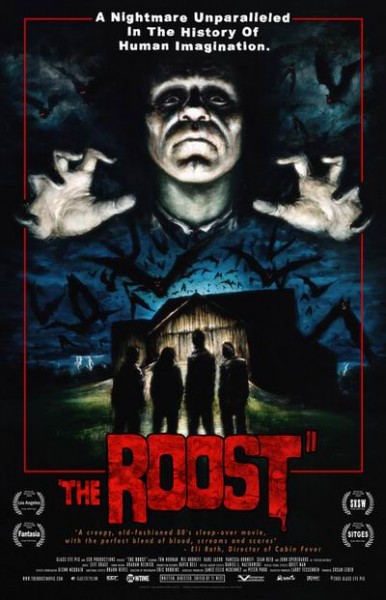 The fact that “The Roost” had the best reviews of all the movies I considered watching tonight is far scarier than anything director Ti West could come up with. Granted, those movies included “Nine Lives”, “The Bone Snatcher” and “The Reeker”- all reputed crapfests which I’m sure I’ll despise- but “The Roost” was the closest to having a ‘respectable’ reputation. Every time I watch one of Ti West’s flicks, whether it be “The Innkeepers”, “House of the Devil” or his segment (Second Honeymoon) from “V/H/S”, I’m always sure he’s one film from making a horror classic…and yet…I’m still waiting. Even though he excels in building atmosphere, he struggles when it comes to his characters. But he has slowly improved, although that doesn’t really matter here because “The Roost” was an early effort from him. So I expected his weaknesses to be magnified even before I started watching it. To Ti West’s credit, “The Roost” does boast an admittedly unsettling atmosphere and it even has a handful of decent scares, but it’s hard to be invested when it looks like the actors might fall asleep at any moment. So yeah, magnified…

Say what you will about the man, but I think there’s little-to-no denying that Ti West is superb at creating an oppressive mood. The shadowy lighting, the creepy ambiance, the ominous music and the spooky locations work together to create a foreboding atmosphere that definitely crawled under my skin. At first, whenever a scary moment would occur, my heart would suddenly stop within my chest. There are also a handful of very freaky shots, which startled me but weren’t cheap boo scares (there’s actually an amusing boo-scare parody). I also liked the gore effects, as they were raw and nasty enough while never overshadowing the visuals. Granted, the murky lighting did sometimes distract me and the tone was inconsistent. The bulk of the story is very grim, but there’s this cheesy wraparound framing device that’s designed after an old school horror theater show, where you have a Vincent Price-esque butler telling the story. I think it would’ve worked fine in a different film, but here, it just contrasted to the bleak plight of the primary characters. I also thought some of the editing choices were odd. You’d think a scene is ending, only for it to continue. Sometimes it worked, other times it did not.

Unfortunately, just as “The Roost” gets to be praised for containing Ti West’s usual atmosphere, it must be damned for containing Ti Wests usual crappy character writing. The characters are obnoxious, constantly bickering and complaining over irrelevant shit that has very little to do with the actual plot. Why waste so much time on another characters wedding, their troubled relationship with one of the characters or the girls estrangement from her Father if nothing comes from any of it? Even though they occasionally tease intelligence, everyone here are MORONS who do stupid things so the plot can advance. Please, horror movie characters: “Don’t investigate the creepy noise! Don’t leave your secure hiding spot when you’re dealing with nocturnal creatures and DON’T MOVE TOWARDS THE DEMONIC VOICE! Also, don’t just stand there when bats attack you!” But what is EVEN MORE AWFUL was the actors performances. I’ve technically seen worse and when they’re just talking normally, they are acceptable, but they seem so disinterested in what is going on. When they should be terrified out of their minds, they just give this lukewarm ‘eh, this sucks’ expression- even as they find corpses of their friends and are attacked by bats or zombies. The ‘lack of’ actual acting totally devoured the tension, as if they don’t seem scared, why should we be?

But at it’s core, the problem with “The Roost” is that it is a short film that was stretched out to an 80 minute running time. The attempts at fleshing out the characters and the horror host bit are only there to pad out the story. I don’t mind the ambiguity of the menace that haunts the characters, but when you have this little material, you might as well dedicate some of your screentime to explaining a little bit. Because even though West’s fear tactics worked on me at first- and sporadically, near the end- he keeps reusing the same kind of build up and pay-offs. Eventually, characters walking around in the dark ceases being scary and starts becoming boring. “The Roost” was able to sink its claws into my flesh, but once it had me, it didn’t know what to do next so eventually I just shook it off. Ti West shows some talent, but he lacked experience and would get better as time went along- even though he’s yet to achieve greatness. But “The Roost” was a weak start. The most fascinating thing about the picture is how I had closed captions on, but it was listing lines that weren’t appearing in the movie…Maybe “The Roost” was being haunted by ghost subtitles…

Violence: Rated R- Not hardcore, but the zombie makeup was pretty nasty.

Overall: “The Roost” is frustrating because you can see so much potential from Ti West, but the project was sabotaged by bad acting, boring pacing and unlikable/uninteresting characters.