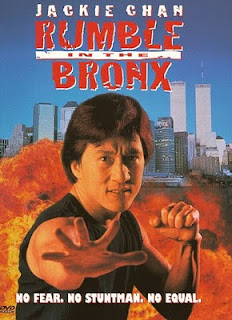 Plot: Keung (Jackie Chan) travels to New York City at the behest of Uncle Bill (Bill Tung), who is about to go on his honeymoon and wants Keung to watch his house. Unfortunately, Keung makes the mistake of standing up to some gangsters who are attempting to rip-off Elaine (Anita Mui), who just bought his Uncle’s store. Now the gang wants vengeance and their feud ultimately leads to an even more dangerous situation when the Mafia gets involved.

“Rumble in the Bronx” was the movie that got Jackie Chan a lot of notice in the west and it’s easy to see why. Well, easy in some ways. On one hand, it has plenty of great action sequences. Yet it’s hard for a westerner to watch this and not laugh awkwardly at it. It’s respectable that Stanley Tong and Jackie Chan wanted to broaden their ambitions by making a much more international film. Yet I have to presume that the filmmakers watched “The Warriors” and thought that was how New York really is. Okay, it’s not THAT over-the-top. But its cartoonish interpretation of the Bronx is pretty hilarious.

I can forgive the blunders in geography, but it’s baffling to see what the Chinese think of Americans. Apparently in New York, (multi-ethnic) gangsters prowl busy grocery stores, threatening hard working (Asian) folk even though they are likely being filmed by security cameras and could easily be prosecuted. They hold dune-buggy races over other peoples cars and when you cross them, they will kill you. Actually that last one…does kind of sound like the criminal element of New York. But they aren’t bad people. They’ve just made mistakes and as soon as you tell them how much everyone hates them, then they are pretty good guys. Even if they did just spend the entire movie trying to kill you in dangerously elaborate ways that could’ve easily taken out passerby’s in the process. At one point, you see a black guy praising Keung for taking on some thugs. It is nice to see a black caricature not be among the thugs for once, but his characterization still borders on racism. Actually, every race is portrayed insensitively. A black person always acts like your stereotypical MOVIE black person. Every Italian acts like your stereotypical MOVIE Italian. What’s bizarre though is that the movie doesn’t portray a lot of these people in a negative light. Uncle Bill is marrying a big, black woman and even though she is a caricature, she’s portrayed as a good person. It’s like the film found a loving form of racism, although I’m only saying that for my general amusement. I believe that the filmmakers just haven’t had that much exposure to Americans outside of what they see in the movies. It’s not like Hollywood has a clean slate when it comes to how they portray Asians, after all.

There are other things to make fun of. The little Asian kid creeped me out. Most of his lines are harmless, but his delivery of them sounds weird. When he mentions that his sister tended to Keung’s wounds, he says “she undressed you” in a way that sounds like he was perving over Keung. When he keeps reminding Keung about how pretty she is, he probably just wants Keung to date her but it sounds like he has some strange, incestuous obsession over the girl. That provided a lot of laughs. The acting in general, complete with plenty of exaggerated mannerisms, is pretty amusing too. It’s strange when Jackie Chan is the most subtle actor in the whole movie. The plot is pretty flimsy. It relies too much on contrivances and the way it develops is just ludicrous. The exposition is lazy, the character development is even lazier and the film sort of forgets to have a finale. There’s no final fight and there’s a certain lack of resolution. I understand that Jackie injured himself, but I wish the movie actually ‘ended’. Instead, it just stops. Also, was it just me or was Anita Mui’s character unnecessary? It’s like the film wasn’t sure what to do with her.

But while all of this sounds like heavy criticism, all of the negativity is actually a double edged sword. Yes, it’s bad, but it’s “funny” bad. I had a lot of fun watching the movie implode under its own stupidity. Yet there is an even greater reason that I like “Rumble in the Bronx”. It might be bad when it comes to story and character oriented sequences, but it is great as an action film. When I say ‘action’, I mainly refer to non-martial arts action. Don’t get me wrong, Jackie does do kung fu. As always, Jackie makes use of the sets and a lot of props. The choreography is quick, surprisingly believable and captivating. With that said, this isn’t among Jackie’s best work. My last Jackie outing, “Dragons Forever”, had much more memorable fight scenes. I couldn’t tell if it was Stanley Tong’s direction, the western stuntmen or Jackie’s age that made the fighting seem a little sluggish compared to his best works. But regardless, the fights still managed to be exceptional.

Yet the film primarily relies on heavy stunts, buildings being ripped in half, cars being crushed, hovercrafts terrorizing the city(!!). When it comes to sheer destruction, “Rumble in the Bronx” is probably Jackie’s most ambitious movie. Even without a final fight, I was so impressed by how much they accomplished with the hovercraft that I barely noticed that. I also liked the smaller touches. Guns are noticeably present (for once) and Jackie even threatens some baddies with one. Jackie is also not invulnerable, even compared to his other Hong Kong ventures. Sure, he can kick ass in hand-to-hand combat. But he can’t take on an entire gang armed with chains. He can’t dodge bullets. You can see that he’s losing stamina pretty quickly after an earlier injury. Jackie is badass in this film, but he wears his mortality on his sleeve. One scene that stood out is when Jackie is randomly clipped by car’s rear-view mirror. It almost looks unscripted (maybe it was), but it just added to how vulnerable Keung is.

The tone is predictably all over the place, but I was cool with it. The movie’s sense of humor is wildly uneven, primarily because Stanley Tong is relying on outdated western gags. Maybe that would be funny over in Asia, but to an American, it can be pretty stupid. There are other times though when I had a genuine laugh. I liked it when Keung realizes that his punches are ineffective against a villain, but the kid gives him a helmet. When that doesn’t work, he has to get even heavier weapons. The villain’s (over-the-top) reactions are pretty amusing. The darker moments are vicious and sometimes even scary. As a kid, I was terrified when Jackie is brutalized by the thugs in an alley. It’s hard to watch because it’s so gruelingly violent. The emotional scenes tend fail because they’re so clumsy in their execution. Make these people cry all you want, Stanley. I’m still going to laugh at how mawkish it is. 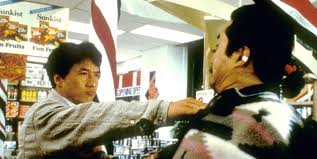 “Rumble in the Bronx” left me with mixed feelings, but soon I started to realize that I even liked the bad stuff. Perhaps the best way to approach the film is to presume that like “The Warriors”, it is just a fantasy. Its characters are caricatures of other characters and the settings are meant to be so over-the-top. Maybe you could even argue that it’s a satire of some sort. Either way, I’m glad at how stupid it is. The action is amazing, but like some of Jackie’s other attempts at catering to the western market, it could’ve been a little generic or mundane. “Rumble in the Bronx” is certainly not generic or mundane. When I wasn’t blown away by the high octane stunts or set pieces, I was laughing my ass off at everything else. It might not be a good movie, but I had a good time watching it.

Violence: Rated R. It is pretty brutal for a Jackie Chan movie. It’s hard not to cringe at the lynching scene.

Nudity: A male backside and you see a girl stripping.

Overall: Watch “Rumble in the Bronx” if you want spectacular action, but also be prepared for the insane amount of stupid that you will have to endure. But be like me and enjoy stupid, for I am smart in brain.