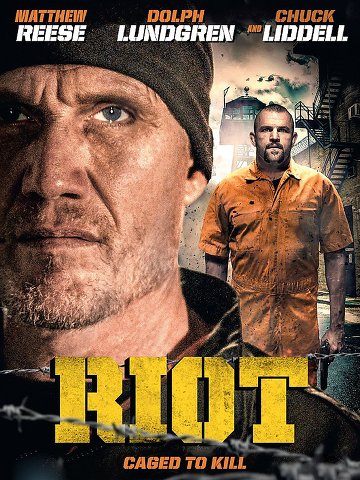 Plot: Jack Stone (Matthew Reese) is a disgraced former Detective, who is sent to Prison for robbing a Bank and killing a Police Officer. But it turns out that his capture and imprisonment was all part of the plan, as he wants to kill a Russian Kingpin named Balam (Chuck Liddell)- an inmate who practically runs the place. But why? Yet who is the eccentric Janitor (Dolph Lundgren) who seems to be assisting Stone?

The face of Dolph Lundgren might dominate the poster and DVD cover of “Riot“, while Chuck Liddell gets his own section in the background of the image, but the starring role actually belongs to Matthew Reese. Who is he, you may ask? Um, he’s the star of “Riot (2015)”…Much like Van Damme and Seagal, Dolph Lundgren seems to be slowly transitioning into supporting roles- using his star power to draw in audiences, without necessarily carrying the movie himself, which allows the fresher talent to showcase their abilities. While Reese is the ‘main character’, Danielle Chuchran is also given the spotlight and UFC legend Chuck Liddell seems born to play an over-the-top villain. This is a basic formula designed to make or enhance new stars and “Riot”…really, really f@cked it up. The only person who comes out of this project looking good is Lundgren himself, for his performance as the enigmatic janitor is actually pretty damn good. Every time he is on-screen, I was paying attention to him instead of Matthew Reese, whom admittedly might’ve really just been a cardboard cutout of Matthew Reese…whoever that is…Reese’s line delivery was solid, but he lacks the unspoken charisma required to play the stoic, silent type of anti-hero. At least I can judge his (passable) acting though, whereas Chuchran is never really given the opportunity to actually…act…She has minimal dialogue to work with and little room to emote, so I have no clue what she’s capable of. Reese might be portraying a bland character, but Chuchran is merely a human-shaped prop. Liddell is oddly reserved as the villain, as if the actor and director were afraid that he would become cartoonish, but this only means that his delivery is kind of listless.He’s not bad, but his performance needed to be coated in a lot more cheese if he wanted to be memorable or entertaining. So none of the younger stars really stand out like Lundgren did, but would it have mattered? “Riot” is bad, but not THAT bad and might even provide some surface level entertainment for a handful of viewers. Even though I was mentally acknowledging its army of failures, I never became bored, annoyed or angry. I was just very, very indifferent.

While I’m not sure if “Riot” suffered from a troubled production, the script is so sloppily structured that behind-the-scenes drama would be the only justifiable excuse. Were the filmmakers constantly changing their minds, shifting focuses and adding additional subplots DURING the filming process??? The narrative surrounds Jack Stone (Matthew Reese), a former detective who was investigating the criminal activities of Balam (Chuck Liddell), who retaliated by murdering Stone’s wife. Stone promptly kills his traitorous partner and stages a Bank Robbery, so he can be sent to the same prison as Balem. Because of his past, Jack must evade corrupt guards and violent inmates, but he captures the attention of William (Dolph Lundgren)- a janitor who appears to be a badass and seems to know everything about the place. This is a storyline which we’ve seen unfold plenty of times before, but that is perfectly OK, because the formula usually used for it is sturdy. In this case- the writer (whose name is Spanky???) relies on all of the cliches, but doesn’t have any idea why they exist or what they’re supposed to be used for. 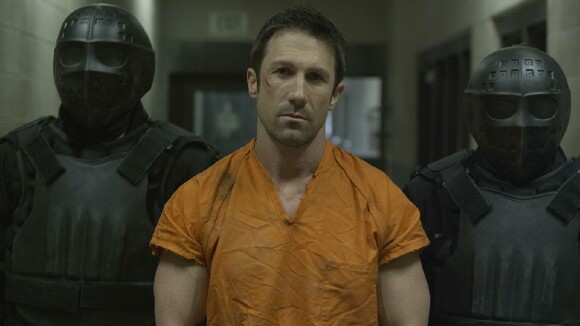 A lot of screen-time is dedicated to a journalist (Renny Grames), who has acquired critical information about Balam thanks to Jack Stone, but her entire subplot feels like it was added during post-production. Balam wants her dead, but because the arc of the story does not surround her survival, there is no reason to be invested. But what about her data on Balam’s allies? It’s never used to diminish his power (which would allow Stone to strike when he’s vulnerable), nor does it matter if the information is lost in the event of her death, because the FBI Agent says they will discover who is on his pay-roll once Stone kills him. So in essence- she contributes f@cking nothing. She is also built up to be the love interest, because “Riot” is THAT cliched, but because this is “Riot“, all that teasing never leads anywhere. POINTLESS! Even more superfluously, Alena (Danielle Chuchran) takes up a lot of screen-time to do things that Lundgren or Reese could’ve done themselves…Because she never shows any characterization or personality, we don’t care if she’s in peril. Finally, I never felt like the protagonist earned his revenge…Yeah, he has the final fight, but it seems like Lundgren (and Chuchran; who is working with Lundgren) were doing all of the planning while Stone sat around and brooded. Sometimes he’d be attacked and would react appropriately, but Lundgren was the one driving the story, going on the offensive and generally just being pro-active…Traits usually reserved FOR THE MAIN CHARACTER! This is another reason why Lundgren was more interesting, while Reese fades away into the background, because the script is favoring the wrong person. Balam (Chuck Liddell) for the most part is just a generic antagonist, but they throw in his daughter out of nowhere and…what am I supposed to feel? Was this supposed to humanize him? Were we supposed to feel a sense of catharsis at seeing him lose the one person he loves? For that to work, we would need to see her presence within his life prior to her disowning him. Otherwise, it just feels random and fillery. They also build up Balam’s #1 henchman as the ultimate bad-ass, but just as he’s about ready to take on our hero, he’s attacked by…Um….someone? And he’s beaten rather easily… I think the henchman was defeated by Stone’s cell-mate, who is set up to be important, only to vanish once Lundgren’s character becomes more prominent. But I’m not entirely sure and I have to presume that in the original script, the cell-mate was going to be a lot more relevant before he became a casualty of rewrites. Why did Lundgren specifically target the Warden during the finale? Was it meant to be personal? Was the Warden his primary target from the beginning? I doubt that extorting $10,000 from an inmate would make you a high priority in a prison riot, especially with so much on the line. I also find myself wondering how many innocent prison guards were killed in the climactic riot. Lundgren explicitly says that most (of the guards) are ‘good’ and we see a lot of them getting beaten to death by violent prisoners, so our heroes kind of suck at being heroic. Just like how Spanky kind of sucks at penning a script…

A script which admittedly moves so swiftly that it’s possible you won’t even notice the majority of problems I just listed…”Riot“, if anything, is a very fast paced affair. I can’t say the quality of the action is particularly good, but they placed the fights and shoot-outs in all of the right places, so our minds would not linger on the flaws for very long. I thought the choreography was slow and timid though, as if the actors were rehearsing for the fight they were about to film, but someone accidentally turned on the cameras and they couldn’t afford reshoots. Matthew Reese probably looks the ‘best’ in the action sequences, having an impressive physique and displaying a few good moves, although whoever was responsible for the choreography failed to make any of his battles exciting. Chuck Liddell really disappointed me, as his one fight scene was very mediocre and every move seemed telegraphed, although I must remind myself that being a real-life bad-ass does not always translate on-screen. I’ve heard praise for Danielle Chuchran’s martial skills, but I found her ‘girl fights’ to be laughable. Granted, all of her brawls are with the same woman and the finale has no dramatic tension because…none of it matters. If she loses, the only consequence will presumably be her death and…she was a prop, not a character, so why would I care? But I thought the techniques looked sloppy…Sand Snakes from “Game of Thrones: Season 5” sloppy…At least Chuchran looks tough, even if I couldn’t take her punches seriously. I cringed every time Lundgren got involved in the action, as he has never looked older and slower, even though his acting makes up for it (there was a time when I thought I’d never say that). If you pay attention, the riot sequence has a lot of confused extras who don’t seem to be taking this seriously…but…I appreciate the ambition. It’s a crazy and wild climax, which provided just enough entertainment value that I could just lay back and try to ignore all of the collateral damage that our stupid heroes are responsible for…”Riot” is bad, but I didn’t really react to it the same way that I react to most bad flicks. The script is a disaster, but at least is tries to keep us distracted with lots of fighting…not very good fighting, but I guess I wasn’t bored. Nevertheless, “Riot” isn’t good enough to watch, nor is it bad enough to watch out of morbid curiosity. But I’m going to be harsh with my rating, because “Riot” was supposed to get me interested in these potential future action stars, but instead only drew attention to how boring they are compared to Dolph Lundgren. If this was the goal, then the script should’ve focused entirely on him. But “Riot” failed in its primary objective, which is arguably even worse than its general badness, so it sucks.

Nudity: None…in fact, this is probably the least sleazy prison movie I have ever seen.

Overall: “Riot” is the type of action thriller that critics love to sharpen their teeth on, while I doubt it will leave any kind of impression on everyone else. Only bother with it if you’re a Dolph Lundgren completest and even then, don’t feel compelled to bump it to the top of your netflix queue.