Note From Author: While I wish to back away from reviewing, I still enjoy covering franchises, so I eventually intend to make this page dedicated to the entire “The Ring” franchise. I don’t count my “Rings” critique to be a formal review, as I just sort of ramble about it.

Rings (2017)– Julia (Matilda Anna Ingrid Lutz) and Holt (Alex Roe) are in a happy, corny relationship, which becomes a long distance one once Holt leaves for College. But when he starts acting strange on Skype and vanishes, Julia investigates and learns that he watched the cursed videotape from “The Ring“, which is now in a digital format. She watches the footage because she’s a f@cking idiot and now they must solve the mystery surrounding the origins of Samara, the ghost who created said tape. I can’t quite decide whether “Rings” was violated on the editing room floor during the two years in post-production, or if it was inflicted with bad genes upon its conception. I was a big fan of the original- both the Japanese and the American originals- although the sequels (from both continuities) ran out of momentum pretty quickly. The first American sequel bombed, but they’ve churned out quite a few of these in Japan, even recently releasing a cross-over with “The Grudge” (called “Sadako Vs Kayako“). I haven’t seen any of the latter sequels though, as I just don’t think Sadako and Samara have franchise potential. Their debuting movies only worked because there was a compelling mystery and the filmmakers masterfully built up the feeling of impending doom, but the sequels struggled because you can’t tell the same story more than once- oh wait, they kind of did…Okay, let me rephrase that. You SHOULDN’T tell the same story more than once, because it will start to get old after awhile. Samara/Sadako are trapped within the confines of their own gimmick, as they are only dangerous if you watch their tape, they take 7 days before they can strike and their method of killing isn’t diverse, so we’d have to wait a long time to get the same shit that we’ve seen before. How do you keep this formula from becoming repetitive and stale? If you break those rules, then what differentiates her from any other demonic entity? Any changes would strip away her identity, which is ideally what would keep us interested in her exploits. That’s why “The Ring” is not franchise material. This might be why the Japanese novel series, which the movies were adapted from, chose to distance themselves from the horror genre, focusing more on the science fiction aspect (from what I hear, anyway). “Rings” proves that they can do nothing new with the concept, because we are more-or-less experiencing the same story unfold once more- except with an additional dose of blandness. Our characters try to solve a mystery that isn’t particularly interesting because it feels like they’re covering familiar territory, even when they’re not. The goal is to set Samara’s soul free and they need to find the body in order to do this, but that was what Rachael (Naomi Watts) attempted to do in the first film, so it’s more-or-less the same plot. They do expand on Samara’s origins, but did they need to? She had psychic abilities, was a disturbed girl and was thrown down a well…That is all we really f@cking need to know and if you give us anything more, you’re just killing the mysteriousness of the character. Samara has become less and less scary the more we learn about her and all of this new information that “Rings” gives us adds nothing to the over-arching lore. I found myself confused about the fate of her Mother and it almost seemed like they were going to reveal that there are TWO curses working together simultaneously (sort of like “One Missed Call 2“), but they don'[t go that route…So why were they seeing visions of Samara’s Mother? Instead of Samara herself? I THINK “Ring TwO” goes into the fate of the Mother, but I don’t remember any of that snoozefest and you’d think an reboot wouldn’t want to rely on us revisiting the film that derailed the plans for an intended franchise in the first place. For the record, this was designed to be a reboot, even though it is technically a sequel. 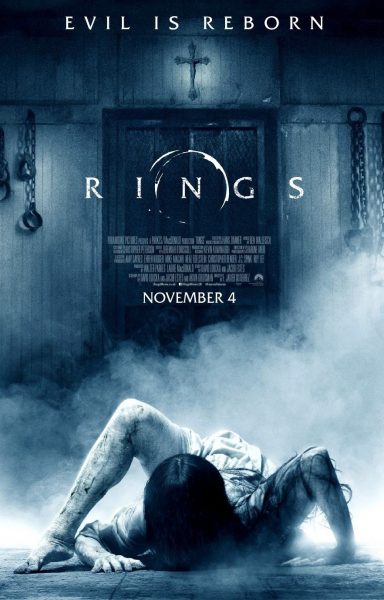 The writing is pretty bad though, even if you ignore the derivative narrative. I found it odd how the characters jump to conclusions, like how Professor Gabriel (Johnny Galecki) immediately determines that Samara’s soul can only be set free if her body is burned, based on…there being some shots of fire in the cursed footage…Julia always seems to know everything, or perhaps she’s just guessing and always happens to be right…and I hate it when characters are alone in a room and pointing out the obvious out loud, because the filmmakers think the audience are morons. Admittedly, we are in a theater watching a crappy movie that we knew would be crap because the studio had it shelved for so many years, so we kind of are morons but PLEASE DON’T RUB IT IN OUR FACES. I hated how Julia would run headfirst into a situation where she inevitably would fall victim to a dream sequence, like…crawling into a crypt alone…going to a creepy dudes house alone…breaking into a dilapidated church alone…The narrative is constantly repeating this, with nightmare scenes making up for the majority of the scares. Speaking of which, why is Samara impeding Julia’s quest, regardless of what her motivations are? She clearly wants Julia to figure out something, yet is constantly trying to pad out the movie by frightening her. These scares aren’t even that good, relying on all of the cliches, even the ones that “Scary Movie 3” already made fun of. The opening scene is the ‘cursed plane’ set piece, which is both ambitious and stupid. I actually like the idea, but the filmmakers must not, because characters run through exposition really quickly and Samara’s introductory reveal fell flat. She just emerges into frame after some rushed buildup. The kills are reminiscent of the past, but once again, we expect them this time around. Those grotesque facial expressions no longer have the intended impact and they’re kind of comical, so “Rings” is stuck in the past. They try to make Samara more sympathetic, but this does nothing but make her less threatening and the ‘surprise twist’ is telegraphed anyway, so you can’t trust the sudden positive interpretation of her. One line early on from the Professor clued me in where the story was going, so I was never fooled. But I was bored. Plus, didn’t “Ring TwO” give Samara a similar motivation? Ugh, maybe I remember that mostly clearly than I thought…Samara’s powers don’t make any sense either, as she brings down a f@cking plane in order to kill one guy…She can do that? Later on, she causes a car accident that kills a character who wasn’t cursed, so why the f@ck does she even need her curse? She apparently has the power of a god and has no limitations, which becomes especially confusing during the finale. The film ends up betraying its own logic and now I wonder…why didn’t Samara do any of this before? Eh, maybe I missed something, because the film is just boring and never held my interest for very long. Matilda Anna Ingrid Lutz and Alex Roe are bland leads, with Lutz in particular boasting some incredibly wooden line delivery. There were a few times when I’d think to myself that she didn’t appear to be afraid, but it turns out that was intentional when someone else acknowledges the same thing, but if our heroine isn’t afraid then why should we be? Aren’t we supposed to relate to h- Oh wait, I guess I related to her a little bit because I wasn’t scared either. But usually in (competent) horror flicks, we feel fear and unease because our protagonists are afraid and uneasy. I guess I’ll concede that the film moves a little faster than most of its kind, presumably because every scene is edited to be as short as possible, getting the exposition over with so we can all move on. But that doesn’t make the movie anymore compelling, because little of interest seems to happen throughout its near-2 hour long running-time. Just some nightmare sequences that can’t be scary because you know what they are and you know that no one is in peril because you know what they are. Even “Ring TwO” was better, at least based on my memory, because it did function as a sequel and the filmmakers had an idea on how to evolve Samara, as misguided as it was. “Rings“…actually just re-uses its immediate predecessor’s ideas, possibly with the hope that we wouldn’t remember any of them…and it’s just boring. Don’t watch it.