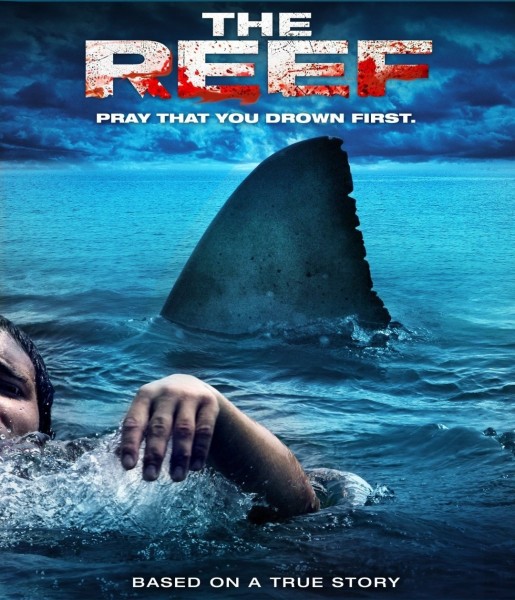 Plot: A group of friends sailing in the Ocean crash into a reef and choose to swim towards a nearby island while they still have the strength. Unfortunately, along the way they find themselves terrorized by a large shark.

“The Reef” isn’t an easy movie to review because it relies almost purely on subjective reactions. Did it scare you on any level? For many viewers it did, and they anchored their observations based on how the film frightened them. Yet if “The Reef” didn’t grip you like that, you’ll probably find it to be underwhelming, possibly even downright boring, so you’ll base your review around that. Regardless of what side you embrace, it’s very easy to overlook the films actual qualities, for better or worse. For me, what stood out the most about the film was how conventional it was. “The Reef” coasts off the formula designed by “Jaws” and “Open Water”, never doing ANYTHING new or unique itself. Yet the problem is that even though it’s a storm of shark movie clichés, it actually executes the formula fairly well. Even if the majority of its scare tactics were invented by Steven Spielberg 40 years ago, at least the filmmakers of “The Reef” applied them effectively.

When I use the words ‘cliché storm’, I mean that the filmmakers didn’t have a SINGLE creative idea driving the flick- something even “Shark Night 3D” could boast.. Just look at the characters:  You have the two protagonists, former lovers who have this very soap operatic relationship, where the guy says lines like “I think you’re afraid of me, afraid of us”. Of course they will rekindle their relationship because the film industry is obsessed with ‘falling back in love’ stories during disaster scenarios. There is also a happy couple and another guy who helps with the boat. You don’t have to be the filmmakers to know who is going to die and in what order. The characters themselves are a mixed bag in every regard. The hero’s interrupting passionate kissing so he can whine about their failed relationship and then the heroines rude, scatterbrained response made the character interactions more awkward than endearing. At least they weren’t a group of noisy, obnoxious teenagers though. Eventually, we must endure an “Open Water”-esque freakout when characters start chewing each-other out based on who they feel is responsible. It’s annoying, but it’s only a single scene and the majority of the time, they’re supportive of each-other. I’m not really sure about the acting though. It’s not bad, but…I did think the actors seemed to lack conviction when delivering their lines. For example, when the primary couple argues, it’s like the characters are just going through the motions instead of having a heated, emotional argument. Yet everyone conveys fear extremely well, which helps build tension. In the end, I can’t say I was rooting for their survival, but I didn’t want to see them end up as shark poop either. So good job? 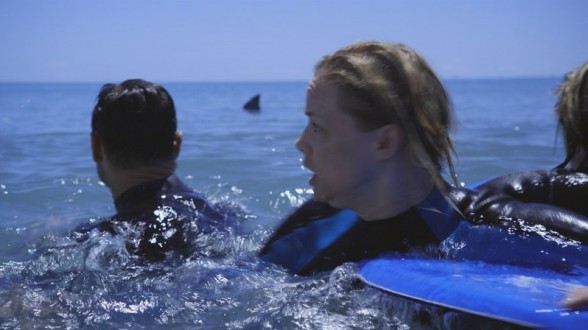 “The Reef” isn’t really scary, but it was intense enough to keep me chewing on my toe nails…because biting your fingernails is too much of a cliché…although that might be fittingfor a movie like “The Reef”…God damn it, I just ate my toe nails for no reason…ew! The filmmakers obsess over voyeuristic shark-cam shots, where we see the characters from what could be the sharks POV. Is it watching them? Brrrr…Even though the music and the stalking camerawork alert us to the sharks possible presence, “The Reef” did often catch me off guard with jump scares. They made me flinch, while the film isn’t as reliant on them as many other horror flicks are these days. Sometimes the film got me with simple “Did they see a fin in the background” sequences. Granted, I’m not entirely sure “The Reef” deserves any credit for this, because as I said, these fear tactics were established in “Jaws” and to a lesser degree, “Open Water”. Yet they also worked on me, so I guess that means there’s nothing wrong with imitation as long as you don’t suck at it. My only major complaint is the music, which felt like it belonged in a made-for-TV film. It’s just a generic horror score and I personally think “The Reef” would’ve had a stronger bite (no pun- oh who am I kidding, PUN INTENDED!) if the music was more quiet and chilling. Or maybe just rely on ambiance. Hell, even if the composer just ripped off “Jaws“, I think it would’ve been a step up. But other than the music, the thrills had more successes than failures. Oh yeah, I should talk about the special effects. “The Reef” utilizes stock footage of a real shark, but it blends seamlessly with the footage of the characters. When they’re attacked, sleight of hand editing is used to make it look real and it never took me out of the action. Sometimes less is more, as Spielberg had taught us 40 years prior.

If the “Open Water” comparisons have made you wary, allow me to assure you that even if it’s derivative, it’s still the more entertaining experience. Like that film, it doesn’t have a lot of variety with the locations and relies much on the tension generated by the characters, but the characters here aren’t as annoying and the shark never waits for too long before it starts giving people love bites. It takes a little bit of time to get going, but once it starts, it moves fairly quickly without being in too much of a hurry. Too bad that the worst of shark movie clichés- Stupid decisions from the characters- are as prominent as usual. How many times do you have to swim away from the group in order to grab a float before you realize that a shark wants to eat you? Why do you keep splashing? I’m not an expert on sharks and even I know shark behavior better than these experienced sailors- and presumably the filmmakers. Also, I’m not entirely sure how the boat sunk. Something hit the bottom, suggesting that the water is really shallow, yet the boat can float upside down? Huh? Wouldn’t the mast get in the way? Oi, luckily, “The Reef” was entertaining enough to where I’d try not to linger on its flaws. It might be as original as the word original, but the filmmakers at least handled the formula competently.

Violence: It’s Rated R, but the kills are mostly left to the imagination. Language is the primary justification for the rating.

Nudity: None, although there is talk of sex.

Overall: “The Reef” is worth a look if you like shark thrillers. If anything, it could be argued as a celebration of the formula, as it uses all the clichés, but it uses them well.