(Directed by the Pang Brothers)

(Written by Cub Chin, Sam Lung and the Pang Brothers) 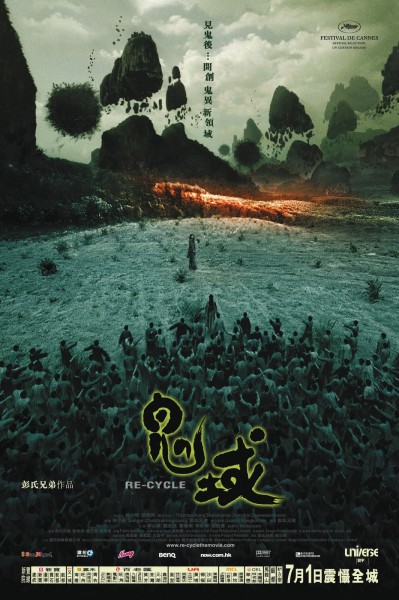 Plot: A novelist (Angelica Lee) begins writing a ghost story, only to find herself trapped in a supernatural world comprised of discarded people, ideas or anything else that was unwanted- where she is hunted by one of her own rejects. Also known as “Gwai wik“.

“Re-Cycle” was created back when the Pang Brothers were still relevant, having successfully capitalized on the J-Horror trend that dominated the early 2000’s with “The Eye“- which was popular enough to even get its own crappy U.S remake. They capitalized on their hit with “The Eye 2”  and…”The Eye 3“…Despite each sequel allegedly being inferior than the last (I haven’t seen them and personally feel that the original was overrated), they must’ve made a significant amount of money, because “Re-Cycle” had boasted a significantly larger budget than their previous outings. At the time, I was bored with the genre and I’ve never been in love with the Pangs’ style, so I…didn’t even realize this existed…Or maybe I did, but my mind never really wandered in its direction, probably because I was currently into the Torture Porn (hate that name) fad during that time period (before it also went stale). Why did I allow their film to penetrate my DVD Player? Because it needed some action and I’m a voyeur! “Re-cycle” is the Pang Brothers’ Magnum Opus, highlighting their strengths and weaknesses so definitively that I almost feel like by reviewing this, I’m reviewing everything else they’ve done. However, the positives and negatives aligned in such a way that this ended up being a pretty cool movie.

At first, I thought I was watching just another J-Horror entry, even though this was a Thailand-Hong Kong co-production…why can’t we just call it A-horror, as Japan was not the only Asian country exporting these kinds of films?! When was the last time a subgenre of horror was given an accurate title? But I digress- I have to give credit to the Pangs for somehow using scare chords to trick me into thinking I had witnessed some ghastly spectre (I rewound; if there was anything there, it lasts a split second) and I also have to give Angelica Lee credit for being pretty and mysterious. But otherwise, I found the characterizations to be flat, the interactions to be awkward, the pacing to be tediously slow and the visual style to be monotonously bleak. The more overt chills felt too soft, primarily because the Pangs were re-cycling (ha) their scare tactics from “The Eye” (which underwhelmed me). Some stylistic flair occasionally caught my eye, but it wasn’t enough to keep me engaged. I was just kind of bored and then Crazy Town showed up on the screen and beat me senseless with a high dose of awesomeness. “Re-Cycle” uses J-Horror as its cover, when it was really a grim fairy tail all along! Part of me does wonder whether the Pang Brothers simply changed their minds during production as to what kind of movie they wanted to make, as the shift is abrupt to the point of almost being out-of-place. Maybe this was a marketing strategy, as they didn’t want to make another trendy horror flick, but they wanted the audience of trendy horror flicks, so offered just enough cliched ‘long haired ghost women’ spookiness to lure them in. Regardless of their intentions though, at least they captured my interest.

“Re-Cycle” is the horror equivalent of “Alice in Wonderland” or “The Wizard of Oz“, although you’ll have to wait about 40 minutes to actually get there. Once you arrive at your destination, you will be treated to nightmarish landscapes, filled with plenty of spooky ghouls who provide plenty of suspenseful situations for our heroine. I wouldn’t call any of this scary, but there are some very unsettling moments. The designs of the various sets are so bizarre and unique, causing every surrealist and expressionist film to have an existential crisis, because “Re-Cycle” makes sure every image is zany and left to interpretation. I never had any idea what to expect, and the Pang Brothers made sure to make sweet love with my eyes using their big, phallic imagination. Yet I do love the neutrality of this world, as sometimes the disturbing backgrounds visions lie dormant in an otherwise bright and warm scene. Or sometimes the locations will be gorgeous, so much so that even the heroine gets distracted from the monstrosities in the foreground. I was also pleasantly surprised by the quality of the special effects, which rely on CGI and Green Screens. They usually looked convincing and even when they weren’t, they fit snugly within the visual style and the narrative. Predictably, the Pang Brothers deliver flashy camerawork and wild editing tricks, because these guys approach most of their films with a high level of energy. I often find their hyperactive style to be overbearing (“Bangkok Dangerous (1999)“) or distracting (“The Eye“), but it worked perfectly within the context of “Re-cycle“.

Unfortunately, the Pangs are obvious examples of ‘style over substance‘ abusers. Even when they have strong stories, their characters are usually generic and their scripts are thin. “Re-cycle” has very little plot and most of its revelations tend to be manipulative and predictable. A character walks from one deranged setting to another deranged setting, occasionally asking what is going on even though every answer is practically the same. I like Angelica Lee, but she spends the majority of the movie just looking alarmed and stoically reacting to most of the situations. You know very little about her character other than her occupation and a failed romance, but she’s just very serious all the time. This is partially intentional, but it lead to me feeling sort of emotionally disconnected- much like the character. I spent my viewing experience marveling at the beauty of the spectacle, without caring what happened to her or anyone she encountered. There is FINALLY a catharsis to this, where the character starts showing emotion and I was genuinely moved, but it was just a little too late and I was now distracted by the social message. “Re-cycle” is very pro-life, even though the directors have claimed that they were not taking a side. Maybe that wasn’t their intention, but then they bungled their message and everyone interpreted the film that way. I’m not condemning the anti-abortion viewpoint, as I understand and even respect both sides of the argument, but the preaching was so heavy handed that I started to gag. I would’ve rolled my eyes just as much if the Pangs forced pro-choice views down my throat, because it’s just bad writing. Then I got angry with the final 5 minutes, which feels tacked on and made the entire experience rather unsatisfying. I won’t go into detail, but be aware that the Pangs attempt a rushed mind screw that derails the entire narrative and retroactively severed the newly established emotional connection.

But at least “Re-cycle” is very tasty eye candy, even if it’s just eye candy. In retrospect, it’s not particularly original (“Pans Labyrinth” and “Great Yokai War” had similar ideas and came out around the same time), but it is imaginative and that was enough to keep my invested. Much like most other Pang Brothers projects, it’s high on style and low on substance, but this time the style entertained me so much that I could forgive the lack of (or misguided attempts at) substance. I attribute this to “Re-cycle” having a story that allows the Brothers to indulge themselves with inventively bombastic visuals (their strengths as filmmakers), whereas “The Eye” and “Bangkok Dangerous” had stories which require more subtlety and nuance (their weaknesses as filmmakers). “Re-cycle” catapulted the Pang Brothers into the Hollywood scene, where they directed the hit- oh wait, they did “The Messengers“…Does anyone remember that? I think I reviewed it once…Or did I?…Very forgettable…Unfortunately, their mainstream careers were completely derailed with their 2008 remake of “Bangkok Dangerous“, which flopped and had only one fan (me!?). They still are working steadily in Thailand, but none of their subsequent projects have caught fire- at least internationally. Maybe “Re-cycle” used up all of their creativity, but if that is the case, they must’ve had a lot before entering production. I don’t believe this though, as “The Storm Warriors” also had an army of striking visuals under its command and somehow it ended up being shockingly boring- presumably because it had no plot, so we might as well have been watching a two hour long special effects demo reel. They obviously aren’t good storytellers and sometimes they even forget to have a story, but they’re true visionaries and much like George Lucas, the Wachowski Brothers and even M. Night Shyamalan, it is possible for the stars to align for them once more. They just need the right project to cover up their weaknesses and highlight their strengths, much like “Re-cycle” did.

Violence: None, but some of the visuals are so grotesque that it deserves a PG-13 rating.

Overall: “Re-cycle” is a different take on the J-horror trend and it’s a visual masterpiece…even if it doesn’t have the strongest narrative or character writing. Plus, f@ck that ending!