Plot: Alice (Milla Jovovoich) continues to slay the undead and protect the living after a mutant infection overcame the world a few movies ago. However, she’s captured by the evil corporation known as Umbrella and placed within their strongest facility. This doesn’t sit well with Alice’s nemesis, Wesker (Shawn Roberts), who has left Umbrella and has his own use for the woman. So he sends a group of elite’s to save her, which just means Alice will spend the bulk of the movie rescuing them. But it won’t be an easy task, as the facility is being protected by a brainwashed Jill Valentine (Sienna Guillory) and a clones of Alice’s dead allies. These include Raine (Michelle Rodriguez), Carlos (Oded Fehr) and One (Colin Salmon).

Remember when the “Resident Evil” movies actually resembled real movies? Sure, the first three films weren’t high art, but they also seemed to have a decent understanding of their chosen medium. They had plots I could remember, decent characterizations, were sort of realistic (at least as believable as a zombie movie can be) and the direction was rather subdued. Granted, none of them were very good, but they at least followed the rules of conventional storytelling. But “Resident Evil: Afterlife” was the beginning of a new trend for the franchise. Now “Resident Evil” would be an assembly of loosely connected sequences, involving hot people fighting monsters in slow motion. The story would be so thin that to call it a ‘plot’ would be an insult to plots. I’m not attacking this approach, as I did enjoy the 4th entry. It provided lots of entertainment (loved the 3D), but it’s still really dumb and shallow. “Resident Evil: Retribution” (these titles have ceased meaning anything) is pretty much the same thing, but the difference between “Retribution” and its predecessor is that this one wasted some intriguing ideas.

Ironically, “Resident Evil: Retribution” is more like a live action video game instead of being a normal movie, making me wonder if its the perfect video game adaptation.. The bulk of the screen-time is dedicated to the characters moving to the ‘next level’, where they have to take on more ferocious enemies each time. There isn’t any attempt to give the characters personalities, unless being played by Kevin Durand counts as having a personality (maybe it does). Yet because a large chunk of the cast includes characters from the games, such as Ada Wong (Bingbing Li) and Leon (Johann Urb), we’re apparently supposed to care. I haven’t played the games, but I did watch “Resident Evil: Degeneration“, which apparently took place in their continuity. In that, Leon is your typical, brooding protagonist and even then, he was still more interesting than this Leon. At times, the attempts at giving fangasms backfire because it looks so silly. I’m presuming Ada Wong wears that outfit in the source material, but it’s just too unpractical for film. The acting was about as bad as I expected. Some of them do good (like Jovovich) and others do terrible (like Guillory). But let’s face it, these actors/actresses aren’t supposed to be playing characters. They’re props, whose only real job is to shoot people/zombies, sometimes dish out kung fu and look good while doing all of this. 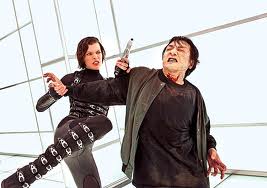 Luckily for the movie, I am a generous fake-critic. I believe that film should be judged partially on what it wants to be. “Resident Evil: Retribution” has no real ambitions other than to be brainless action and as such, it’s fine. Paul W.S Anderson has always been noted for his attention to set design, cool visuals and stylized action. I feel he has become a bit too reliant on CGI (what happened to actually building sets, like in “Mortal Kombat“?), but at least the film looks polished. The effects are all very good and the monsters are disgusting. Anderson has toned down the slow motion a little bit and the opening ‘reversed’ battle was pretty creative. The gun fights and martial arts choreography are slick and blend into each-other quite nicely. It’s over-the-top and once again, normal people are able to take on super-powered mutants in hand-to-hand combat (which makes no sense), but it looks flashy on-screen and that was obviously the intent. I loved the inclusion of Muy Thai, which adds some flavor to the choreography. The action never really seems to stop either, although I’d argue the pacing is too fast, as nothing had time to really register to me. Even now, I’m already forgetting what went down in this movie.

Usually I would stress how the action is what we’re supposed to be paying attention too, not the story. But “Resident Evil: Retribution” introduces way too many cool ideas and then has no idea how to use them. Umbrella has cloned many past characters and for reasons I still don’t understand, puts them in random scenarios. But with the exception of evil Raine, who at least turns out to be a main villain, everyone else (including good Raine) isn’t necessary. Good Raine only shows up for about 10 minutes total. Good Carlos dies immediately (you see it in the trailer) and I don’t even think Bad-Carlos had a line. I was really looking forward to seeing One (Colin Salmon) again, as he was awesome in the first “Resident Evil“, but he only has 2-3 lines before being removed in the lamest way possible. I can accept a movie with little or no plot, but when it throws away too many good ideas like this, I start to get angry. Adding to my frustration, I kept feeling like I didn’t understand what was going on anymore. The excessive cloning and putting said clones through these ‘scenarios’ no longer seemed to make a lot of sense. How would that help Umbrella understand how to control the infected? Why did the filmmakers need that? I think they just wanted to rip off the “Dawn of the Dead” remake and maybe show a zombie attack in a densely populated area. What about the Red Queen? In the first film, her goals made sense. Protect humanity at the expense of the few people who were trapped. But now she just wants to kill everyone? Ugh, this movie is making me ask way too many questions, which is bad because it’s suppose to thrive on its simplicity.

“Resident Evil: Retribution” provides excellent stunts, effects, monsters, gun battles and martial arts. It was at the expense of story and character, but whether or not it was worth it is up to you. But where “Resident Evil: Retribution” screwed up was that it conjured up some really cool possibilities, which really got me excited, but then squandered ALL of them. What was supposed to make me happy made me mad, so I’m going to have to be on the harsh side. It’s pointless to compare this to the first three movies because it is so different from them, but I would say it’s a step down from the previous film. The 3D also wasn’t as impressive, even if it was still decent.

Violence: Rated R. Could always be gorier, but it was violent enough.

Nudity: None, although Milla is almost naked again.

Overall: “Resident Evil: Retribution” is worth watching if you liked the last film, but keep your expectations low. You have to know what kind of movie you’re getting into.