Plot: Rama (Iko Uwais) goes undercover and infiltrates a crime syndicate in order to get revenge on a rising criminal, protect his family and to smoke out corruption within the Police force. But it’s not going to be easy.

“The Raid 2: Berandal” should’ve discarded its subtitle and replaced it with: “101 ways to violently murder someone“…Jesus, this made “The Raid: Redemption” look PG-13 worthy in comparison…and that movie made most Hard R flicks feel PG-13 compared to it! It was quite humorous listening to my fellow audience members crying out in shock at the horrific acts done to the human body. Sure, I’ve seen people killed by baseball bats or hammers, but usually it’s more…erm, clean (?) than this. Here, chunks of flesh get torn out, bones bend in awkward angles and the camera certainly doesn’t shy away from the visceral attacks. Gareth favors close-ups whenever someone dies. Much like its predecessor, the excessive violence of “The Raid 2” almost overshadows the choreography- which still continued to amaze me. The martial arts techniques and styles on display are impressive, although once again this resembles a more stylized version of street fighting than it does traditional martial arts. Every action has a fitting reaction, giving the choreography a smooth flow. Yet once again, the violence is going to stay with you much longer than the actual choreography does (as good as it is). But this is simply the sequel continuing to do what the original film had already done so well. I didn’t feel the choreography was better as much as the gimmicks surrounding the fights were expanded. I can’t think of a single normal fight between two enemies. Either the location, props or circumstances will play a major role in each of these confrontations. Example, the film begins with our hero having to defend himself against a multitude of foes in a bathroom. So he uses the close quarters to his advantage and eventually it starts to work against him. EVERY SINGLE BATTLE is unique because none of them are standard, each boasting a different approach. This helped the movie conquer its…unnaturally long running time, which we will get into later. Oh yeah, the gun battles are still grisly and that car chase was freaking insane. Action fans will be pleased, although they might be dismayed that this not an action packed movie…which we will also get into later.

But first…God damn, Gareth Evans really stepped up his game as the director. I’ve always felt he had an eye for nice visuals as well as creating the proper atmosphere befitting of the project…whether it was “V/H/S 2“, “Merantau” or “The Raid“. But the level of artistry present in “The Raid 2” is simply astounding. Once again, he knows how to frame a fight scene and is sure that shaky camerawork or overly tight editing don’t disrupt the flow. Yet he- or his cinematographer, whoever was responsible- thought of many creative and unusual ways to shoot a scene. There are bizarre angles where the camera breaks the fourth wall, surreal slow motion and almost horror like push-ins. Even when he isn’t terrorizing his poor cameraman, it’s only because he doesn’t want to distract us from the fights or he wants to show off the high caliber locations. While the exterior shots will probably attract more attention- because they’re gorgeous- I was more enamored with the interiors…The color palette is simply mesmerizing, especially when you get to that red room. For some reason, that set reminded me of Kubrick. The music and editing fit perfectly with the visual style, with my favorite scene being the ‘snow tragedy’. That brought chills to my spine, but “The Raid 2” was much more artistically made than its predecessor…and 90% of martial arts themed movies ever made…It contained lots of eye candy and I’d say the camerawork greatly benefited the action sequences. 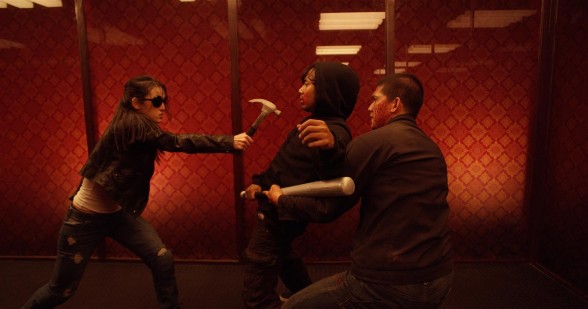 Now, if you are a fan of “The Raid: Redemption“, or you’re one of its few detractors, I want you to throw all those feelings out when approaching the sequel. Because even though it has the title and some of the same characters and a hard-on for gory fight sequences, they are VASTLY different movies. “The Raid” was 100% action spectacle, being more akin to a live action video game that pumps the adrenaline more effectively than most actual video games. Some, such as Roger Ebert, will find something like that to be nothing more than an assault on the senses. I respect that, even if I’m on the opposing side. “The Raid 2” puts more emphasis on the plot and characters, which might scare off some viewers if they remember the incredibly long running time. I’d say this is no more of a martial arts movie than Donnie Yen’s “Kill Zone” was. Yes, there was quite a bit of fighting. But you almost feel like the filmmakers originally wanted to produce a gangster drama, but in order to secure financing, they had to convert their project into a martial arts feature. This is at least PARTIALLY true, but only because the filmmakers realized they didn’t have the time or funds to make their original project and apparently making a sequel to an established hit would be easier. While I will concede that “The Raid 2” didn’t need to be a sequel, as the majority of the surviving cast is promptly removed and Rama is such a standard hero that he could’ve been anyone. But I thought it found the perfect balance between drama, gangster politics, intrigue and action. The first reason for this is I connected with the characters and their situations. Whether they were likable or jerks, they all captured my interest and the acting/dialogue is top notch. Even though the plot is nothing original (think “Eastern Promises“) and there are quite a few conventions and clichés, the way the plot unfolded kept it very entertaining. There are monkey wrenches thrown in the characters plans, creating lots of tension, which makes the fights have an emotional punch that the previous film lacked. The second reason is that if there were more fight scenes, I think it would’ve made the ‘breather’ moments that focus on character or story stop the flick dead in its tracks. More action would’ve drawn more attention to when the action stopped, so I would’ve been burned out long before the end credits rolled. As it is, it transitions between spectacle and drama swiftly and I never became bored.

The funny thing is that I can be the asshole who takes his critiquing razor and slices away at least some of the enjoyment to be found within “The Raid 2“. Technically, it could’ve been shorter as some of the subplots were unnecessary or maybe a little convoluted. Example, Yayan Ruhian (Mad Dog from the first one) returns in a different role. He gets enough screen-time to make you think he will be a major player, only to well…not become a major player. He’s a walking plot device who got to do and say more than your usual plot device. Yet I wouldn’t have changed a thing because his character was so intriguing that I simply didn’t care if he was unnecessary. I cared for him. It could also be argued that he represents a ‘what if’ scenario for Rama (consider his relationship to his wife and child), although this leads to my one legitimate complaint. Iko Uwais is an excellent performer when it comes to martial arts and he’s not a bad actor. Like Tona Jaa, he’s fine within the right role, but the problem here is that his character was vaguely written. Before, he was a no nonsense, righteous, good cop. Here, he tends to be more self serving and prone to violence, even though he has good intentions. This didn’t feel like Rama to me, although this might have to do with “The Raid 2” not being conceived as “The Raid 2“. Or the writers were more interested in developing the supporting cast instead of him. They develop organically, whereas Rama suddenly has jumped from A to B. If Iko Uwais was a better actor, he probably could’ve sold Rama’s development in the same way that Tigen Chen made his character growth work in “Man of Tai Chi“, but he isn’t. Still, this doesn’t bother me a lot because he’s carried by the rest of the movie. The supporting characters- from their back stories to their fates- tie into the character of Rama, so whether that was the intention or not, I could forgive this. Now even though I’m discussing the plot and character writing, I do want to stress that there is a LOT of bone breaking martial arts. “The Raid 2” just doesn’t want to only be about the bone breaking martial arts, giving us strong characters to drive a compelling story to balance out the action- whereas “The Raid” was simply about the action. I thought both movies succeeded in their goals, but they certainly had very different goals. But above everything, when the baseball bat was lodged into some dudes face, it lodged itself into my heart.

Violence: Rated NC-17 worthy, even though I think it’s officially rated R. It’s one of the most violent movies I’ve ever seen.

Overall: I thought “The Raid 2” was great, but it is a much different beast than its predecessor.