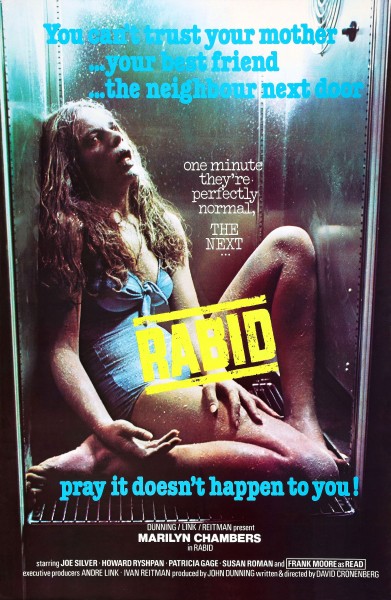 Plot: Rose (Marilyn Chambers) is in a horrible motorcycle accident near a cosmetology clinic, where the doctors use experimental treatment to salvage her appearance. While successful, this causes a phallic stinger to grow from her arm-pit and now she has an unquenchable thirst for blood.

I suppose I should begin by reminding everyone that the reason why “Rabid” found itself in my DVD player was because one of my readers requested that I cover some of David Cronenberg’s works. I began with “Scanners“, but I decided to pass on doing a full critique because it wasn’t horrory enough and I didn’t have anything substantial to say. This continued with “Videodrome“, “The Fly” and “Dead Zone“, even though they were much closer to meeting my standards of ‘horror’. Ultimately, I chose to compile my thoughts regarding these films into a single critique of David Cronenberg, which can be FOUND HERE. “Rabid” is the first Cronenberg flick to get the full treatment, as it provided me with enough content to discuss and is a conventional horror flick…albeit coated with a thick layer of the unconventional. I can’t say that “Rabid” is a great movie. If anything, I thought it was rather crude and shallow despite Cronenbergs attempts at sexually charged symbolism and social commentary. Yet I was also taken aback by the ambition and creativity, even though I should be used to this from Cronenberg by now. The directors’ imprint is definitely noticeable, even if it’s rather unpolished compared to his later works.

At first, I thought “Rabid” was more weird than scary. The idea of a woman developing a thirst for blood after an experiment goes wrong isn’t anything new, nor is the phallic weapon that she uses to penetrate her victims. But why have it come out of her armpit? The film never really explains the ‘why’ and even the ‘what’ is pretty vague, as we never get a clear glimpse of the thing that now resides inside of her. Nevertheless, I’ve never seen that before and that is why I love Cronenberg. I’m grateful he didn’t get too cocky and have the stinger come out of her vagina, which I think would’ve been too blatant…although as the symbolism here is about as subtle as her phallic weapon, I’m honestly surprised that he didn’t go that route. Many fans will gravitate towards the sexual imagery, which they will think adds depth to the narrative. I found myself rolling my eyes, as it’s obnoxiously obvious. The kills resemble love scenes, the thirst for blood represents lust and the phallic thing coming out of Rose represents…a phallic thing. We get it! Cronenberg would eventually find smoother ways of delivering similar thematic material without being too obvious, allowing the audience to use their brains. In the case of “Rabid“, Cronenberg is spelling out the symbolism for us, which I thought was corny. I also have to admit that I was kind of bored throughout the first half. The pacing is slow, the kills become monotonous because they all look the same and then we have the characters…

I felt a complete and utter detachment from the events of this movie because the character writing was so bland and uninteresting. Who is the main character and why should I care about them? Rose (Marilyn Chambers) seems like the obvious choice, but we don’t get to know her before the accident. When she wakes up, she immediately starts feeding on people and shows very little of an emotional response. There isn’t any internal conflict, remorse or a sign that she wasn’t a monster before actually becoming a monster. She does cry at one point, but I was under the impression that she was shedding crocodile tears in order to lure in some prey. We do eventually learn more about her, but it wasn’t until the last 20 minutes of the movie. Her boyfriend (Frank Moore) is arguably even worse, as at least Rose is somewhat interpretive, but he is just…there. He has no personality, reacting to every event surrounding him with the same bank facial expression. He doesn’t realize the source of the epidemic until the finale, so that potential for drama was wasted. Even his role in the accident is never really fleshed out, only brought up twice. I was expecting a lot of tension surrounding the possibility that Rose might attack him, but they don’t even reunite until the very end, so that was wasted as well. Instead, they introduce a ‘best friend’ (Susan Roman) to fill this role, even though she doesn’t appear until later- so once again, we can’t really care. We know her fate simply because of the timing. The other contender for the protagonist role (the Doctor- played by Howard Ryshpan) is removed from the story around the half way point and we never learn much about him either. The acting is very uneven. I thought Chambers did a good job at playing up her sex appeal, but her faux-innocence also induced eye rolling. Frank Moore was too wooden, until the ending, where he suddenly is too over-the-top. Most of the actors can do really good in parts, but really bad in other parts, while some are consistently solid and others are consistently terrible. But no one has chemistry and the interactions were just kind of mundane. Cronenberg describes his movies as coming from the POV of the disease, so maybe that’s why the characterizations are so hollow. But while an interesting concept, it doesn’t necessarily translate to compelling cinema, although Cronenberg does get a lot better.

But when the epidemic goes out of control, “Rabid” finally began to win me over. Cronenberg didn’t have a lot of money to work with, but he convinced me that Montreal was being overrun by this disease- which turns people insane and bloodthirsty. There are a lot of extras during the early stages and this allowed for some chaotic scenes as they tried to flee the infected. But over time, the streets become emptier and you really feel like the apocalypse is on hand. Cronenberg builds up this unsettling atmosphere so effectively that even I felt a strong sense of dread, despite not caring for the characters. There are some really good jump scares, but they’re earned and succeeded in making me gasp. “Rabid” does have a mean streak, one that might turn off some viewers, but I had to admire its balls…The stakes were raised far beyond the low budget and I realized that no one was safe. I know I’m guilty of copping out, spending the first 2/3’s of the review ranting, only to concede that the last third was enough to earn a positive rating…But but the second half was just that damn impressive. Suddenly, I really liked the pacing, the direction and slow burn suspense. I still believe that the flaws are still flaws and the missed opportunities are still missed opportunities, but at least “Rabid” provided a powerful pay-off.

Violence: Rated R. Not as gory as other Cronenberg features, but still fairly gross and bloody.

Nudity: Quite a bit of it, thanks to adult star Marilyn Chambers.

Overall: “Rabid” takes awhile to get going and might be a bit too full of itself, but it does get a lot better during the second half.