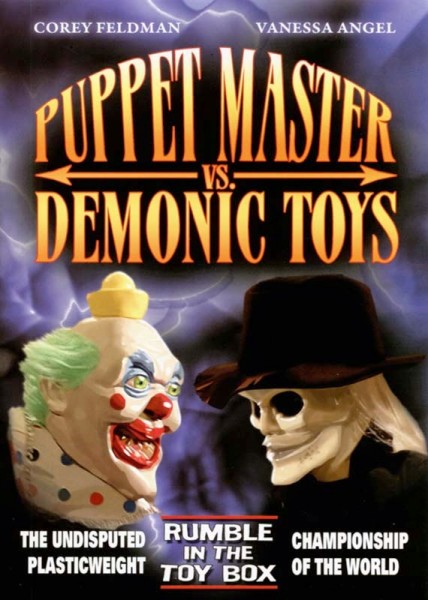 Plot: A corrupt toymaker (Vanessa Angel) sells her souls to a demon in order to take over the world and acquire our beloved puppets from Robert Toulon (Corey Feldman)- who is apparently related to Andre. So the demon loans her his own ‘demonic toys’ in order to assist her.

Well, that was f@cking stupid. The idea of crossing over “Puppet Master” with “Demonic Toys” could’ve been pretty cool if it had been produced 10 years prior, back when there was a reason to watch Full Moon Entertainment/Features/Production/whatevertheywerecallingthemselves outside of sheer masochism. BUT WAIT, there is a twist! The Syfy channel somehow managed to get the rights from Full Moon in order to produce their own made-for-TV flick. I never thought I’d feel that a franchise would be safer in the hands of the Syfy channel…Band himself claims that this is not part of the franchise continuity for this reason, as if- pardon me, I’m currently laughing- he is embarrassed that it exists…and that there is an overarching continuity to begin with. Unfortunately, “Puppet Master Vs Demonic Toys” rolls around in its own excrement, much like the last few Puppet Master sequels. The only difference is that it seems to enjoy its place amongst the feces. Those who expect an epic showdown between the franchises will be disappointed and the attempts at humor usually backfire…But I did occasionally chuckle and at least it can call itself a real movie- albeit a shitty one.

Much like most Syfy original features, “Puppet Master Vs Demonic Toys” is supposed to be a more comedic experience. It really tries its hardest to make you laugh, but oversells the gags and jokes to the point where you want to choke the flick to death with its own sense of humor. Every once in awhile, the film would catch me off guard with something bizarre. Sometimes it’s an absurdly bad special effect, other times it will be an oddball line and I will admit that I don’t believe I’ve ever seen “Santa Bael” before. I was not expecting that. But my anchor was Corey Feldman, whose performance is amazing. His acting sure as hell aint good, but it’s…it’s just fascinating. His mannerisms are always so strange, as if the actor took some drug before filming and suddenly had an urge to have sex with his puppets- some of those stares were very suggestive. Feldman is capable of doing good work, but he seems to understand the crap he’s in and just wants to have fun with the role. As bad as he is, I almost always enjoyed watching him as long as he wasn’t flirting. Then again, the fact that his love interest (Silvia Suvadová) seemed to be responding positively to his creepy, sexual predator style of flirtation brought its own brand of amusement. I also thought it was crazy how his daughter (Danielle Keaton) didn’t look that much younger than he was. Are we sure he didn’t just kidnap some poor woman and brainwash her into thinking that she was his daughter? The actors, surprisingly, all have a lot of talent but obviously can’t do much with this material. I was sometimes embarrassed for them, although I found Vanessa Angel’s over-the-top performance as the villain to be more annoying than endearing.

Blade, Pinhead, Jester and Six Shooter all return from their franchise and…wait, no Tunneler? Odd. They have new designs, but I can’t say I’m a fan of them. They’re just not as cool or menacing looking. They’re also much more child-friendly, whereas the same characters from even the more lighthearted “Puppet Master 4” and “Puppet Master 5” had retained their edge. They do get robotic upgrades, which I thought was dumb as they rob the puppets of their visual appeal. For example, Pinhead’s most noticeable aesthetic attribute has always been his giant, human-like hands, but now he has these scrawny robotic arms that don’t compliment the rest of his body at all.The Demonic Toys get it A LOT worse though, with only Jack Attack retaining a little dignity- and I stress ‘a little’. The problem with Jack Attack, Grizzly Teddy and Baby Oopsie Daisy is that for them to have the same presence as before, more money needs to be put into the scary facial features- which the filmmakers can’t afford. The whole point of “Demonic Toys” was seeing these innocent looking toys transform into frightening monstrosities. This took effort, skill and the right amount of resources to accomplish. “Puppet Master Vs Demonic Toys” lacks all three and when you add the silly tone into the mix to ensure that they can’t be scary anyway, you take away everything that made them interesting to begin with. Toulon’s puppets will always have their unique designs to fall back on, but the Demonic Toys now just resemble basic horror props.

Grizzly Teddy doesn’t get to do much, only acting as support for the others. Baby Oopsy Daisy was f@cking annoying. His vulgar dialogue is too childish and his twisted menace from the original has been replaced with…fart jokes…Lots and lots of fart jokes. Jack Attack gets a new ability where his scream causes heads to explode…for some reason…but his appearance suffers the most. He just looks so cheap.  The special effects suck in general and movements of the titular creatures almost made me pine for the anti-puppetry work from “Curse of the Puppet Master“. But then again, you have to consider what studio is making this movie. If you’re watching something on the Syfy Channel, you aren’t supposed to be taking it seriously. “Puppet Master Vs Demonic Toys” knows it has shitty SFX and it wants you to laugh at them. I will admit to chuckling when we see the puppets completely stationary in the elevator, but I usually find ‘intentionally bad’ to just be an excuse for laziness. The production values are significantly better than the last three sequels though, as there are real sets, actors, effects- as bad as they are- and there isn’t any stock footage. The sound and video quality have improved as well. Unfortunately, I felt the filmmakers let the audience down in regards to its primary selling point: The battle. The Puppets and Toys don’t interact until the very ending, in which the Demonic Toys are defeated almost immediately. Grizzly Teddy growls at Blade, who does a ballerina spin and dices him to death in the process. Even Jack Attack, built up as the biggest threat, is taken out almost immediately by Jester…of all puppets…

So “Puppet Master Vs Demonic Toys” is a bad movie by anyone’s standards, but the question is whether this is an entertainingly bad movie. That is obviously what the filmmakers were going for, but I spent the majority of my viewing experience more annoyed than amused- even though it has its moments. I’d say “Puppet Master 4” was more entertaining for the wrong reasons than this one. Maybe I would’ve responded more positively if there was more ‘Puppet Master Vs Demonic Toy’ action and a little less baby doll farting. I will give the movie credit though for being very energetic. Something crazy is always being thrown at the screen and while most of it fails to stick, I usually wasn’t bored. The bulk of the writer’s ideas were misguided and kind of stupid, but at least he had ideas and there was enough of a budget to realize many of them. I’d say “Retro Puppet Master“, “Curse of the Puppet Master” and even “Puppet Master 5” (which was technically a lot better) were much more tedious watches and “Puppet Master: The Legacy” enraged me so much that all “Puppet Master Vs Demonic Toys” was not whore stock footage. None of this changes the fact that it’s a piece of shit, but at least the smell isn’t quite as bad.

Violence: Rated R. There are a few gory moments, but I wish there were more.

Nudity: None, but there is some sexuality. Considering how slapsticky Baby Oopsy Daisy is, it’s a little jarring when he adopts a more rapey persona.

Overall: “Puppet Master Vs Demonic Toys” brings shame to “Demonic Toys“, but actually almost partially redeems the awfulness that has devoured the Puppet Master franchise. But on its own or as a cross-over, it fails.