(Written and Directed by James DeMonaco) 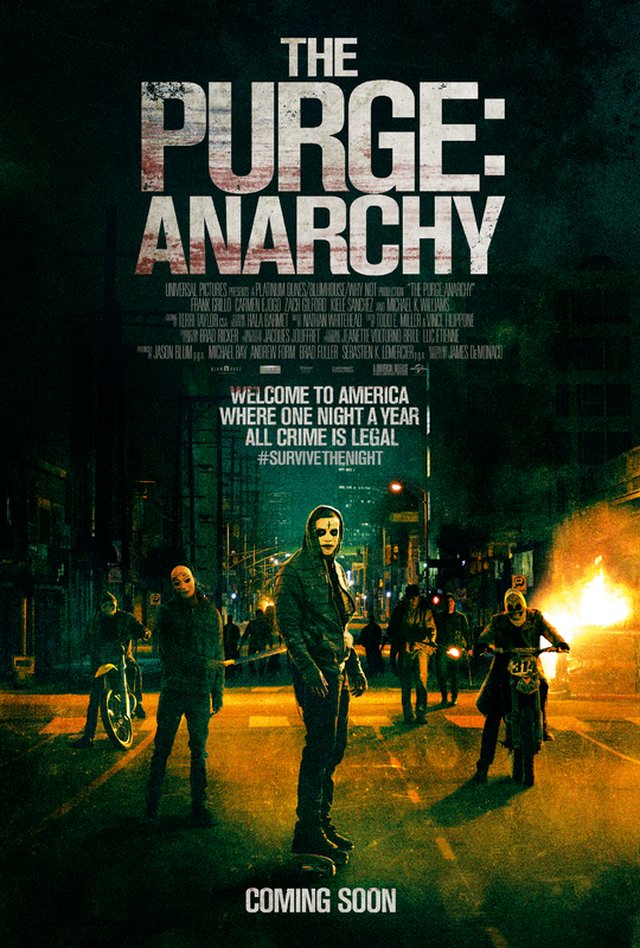 Plot: In the future, there is one day a year where all crimes become legal in order to ‘purge’ barbaric tendencies. It has boosted the economy, while reducing crime to an all time low. A man with a vendetta (Frank Grillo), who is participating in the purge for mysterious reasons, finds himself protecting a bunch of strangers who are stranded on the streets.

My feelings towards “The Purge” weren’t any different than the majority of the viewers who collectively went ‘meh’. It had a unique concept that everyone felt was wasted on a home invasion scenario, which overshadowed the fact that it was a very mediocre movie. But apparently the central idea and marketing campaign caught the interest of the public, because despite receiving lukewarm reviews at best, it ended up grossing A LOT of money. So why wouldn’t they make a sequel? When I heard that it was entering pre-production, I groaned and turned the page onto something that actually interested me. I didn’t pay attention to this project until the trailers started being released and slowly I began to realize that “The Purge 2” was trying to correct the mistakes of its predecessor. That gave me hope, even though I still wasn’t expecting much. I did manage to drag my ass to the theaters and much to my amazement, “The Purge: Anarchy” ended up being pretty entertaining. I’m not calling it a good movie, but I thought it was more fun than the previous film and it explored the admittedly creative idea a little bit more too.

Even though everyone- including myself- complained that “The Purge” was filled with wasted potential, I would like to remind you that the idea of ‘crime being legal for a day in order to purge murderous tendencies’ is a very flawed one. Most criminals are repeat offenders, so…are we just going to ignore that for this movie? But “The Purge: Anarchy” gives an alternate reason for the event and I actually could buy that much more. While I did appreciate the more sinister approach to this idea, I don’t want to give you the impression that “The Purge 2” is intelligent. Yes, it does get really preachy about its message, but that just means the movie has a mouth, not a brain. It’s best to just look at “The Purge 2” as an action-thriller, where the premise only exists to give an excuse for all of this mayhem to happen. Once we get past the set-up and character introductions, the entire runningtime is more-or-less dedicated to running, searching, fighting, shooting and killing. If the idea gives us anything, it’s that the violence takes place in public, amidst the center of the chaos. So for those who felt that a Suburban home was a weak location for this kind of story, you should be pleased because “The Purge 2” has a variety of locations at its disposal, giving it a more epic feel despite the low budget. I wish the filmmakers could afford better lighting equipment though…At times, the murkiness did diminish the impact of the visuals…even though DeMonaco had some success with the atmosphere. Something about those empty streets got to me. 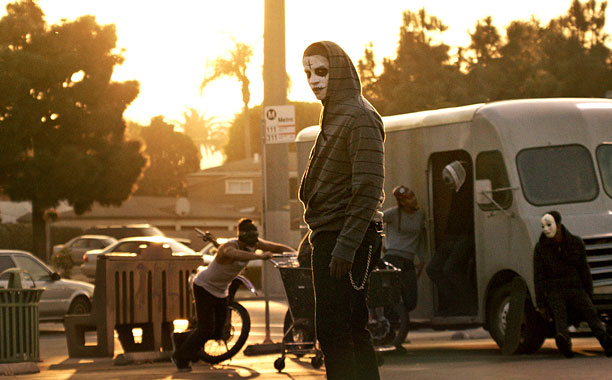 As for the characters, Frank Grillo stole the show as the protagonist. The man is intense and frightening, but thoroughly likable and his presence probably is the biggest reason why “The Purge 2” was so fun. Don’t get me wrong, this is a fast paced flick, but without a strong lead the gun fights might’ve lost their luster almost immediately. But when Frank Grillo is doing the gunning…nothing boring about that! Everyone else is pretty good, although occasionally there will be a poorly delivered line. The characters occasionally are annoying, but at least aren’t consistently so. Sometimes I even liked them. One of the bigger weaknesses surrounding “The Purge 2” is its tendency to be repetitive with a lot of its character interactions. How many times do we need to hear the daughter ask her mother if she is okay, or the hero tell the daughter to shut up? With that said, these people were nowhere near as obnoxious as the family from “The Purge“. In fact, whereas too much of that film was dedicated to them bickering and doing stupid things in order to pad out the running time, this film just wants to get to the next action set piece. There’s more shooting than talking. Some of the zaniness of the villains is hard to take seriously, but at least the over-the-top dialogue, silly mannerisms and crazy weaponry was fun to behold in its own way. I felt the creepiest moment was when a psycho takes off his mask and instead of shilling out ironically poetic lines about ‘being God’ or ‘unleashing the beast’, he acts like a normal person. I almost wish there was more of that, but as I said, the weirder mannerisms of the baddies do have an appeal.

Even though many will complain about “The Purge 2” not fully exploring the premise, I personally feel that if it lingered too long on it, the holes would just stand out more…making “The Purge 2” even dumber than it already is…and it’s already pretty dumb. There’s very little substance in the script, even though it tries to make up for this with preachy dialogue. Yet it also has enough intriguing ideas that it would be a mistake to dismiss the script as lazy. I enjoyed watching the various scenarios that our heroes found themselves participating in. The finale is very reminiscent of “The Hunger Games“, which was pretty cool. I liked watching the villains act batshit insane and I liked it even more when said villains found themselves on the wrong side of the gun when confronted by a very angry Frank Grillo. “The Purge 2” is not remarkable, nor is it even memorable, but it did exceed my expectations and I didn’t feel any guilt enjoying it.

Nudity: None, although there is attempted rape.

Overall: “The Purge 2: Anarchy” is a strong rental, even if you didn’t like the first film as they’re both so different. It’s a fun action-thriller, albeit an unexceptional one.