Plot: After World War 2, an insane military veteran murdered his former girlfriend- who dumped him via a Dear John latter- and her new boyfriend. In honor of their memories, the graduation dance (which they had previously attended) was discontinued. 30 years later, the dance is revived and the killer returns to prey upon amorous teenagers.

The 80’s Slasher subgenre of horror and I have a very passionate but strictly physical relationship. I love these movies for many reasons: The violence, sex, the grainy footage that somehow manages to clearly show creepy silhouettes in the background. Even though the filmmaking surrounding each film was often summed up as ‘crummy’ by the critics, I’ve always felt 80’s slashers had gorgeous cinematography and a powerful atmosphere- especially compared to the next decade of horror. Yet even though I will defend the genre to the bitter end, even I have to concede that all of them have problems. While the gimmicks and locations were often changed, the plots and characters seemed to remain the same. This is why I try to avoid getting close to the genre on a deeper level, as I don’t want to suffer a burnout like I did with most horror sub-genres- from J-Horror to torture porn to Paranormal hauntings. So I pointedly will watch a few 80’s slashers once a year at different intervals, so I don’t get tired of them. “The Prowler” is at its core, just another slasher flick from the 80’s. Fans of the genre will embrace the awesome gore effects, while detractors will condemn the nonsensical plot. If anything stands out, it’s that this example is more violent AND more nonsensical than the average slasher.

Tom Savini is often regarded as one of the most important people of the original slasher movement, as he revolutionized gore effects with flicks like “Dawn of the Dead” and “Friday the 13th”. Yet the more money and experience he acquired throughout his career, the more INSANE his ‘kills’ became. At first glance, they resemble standard-albeit bloodier- slasher kills. A character will have something impale their throat, or their  throat will be slit or maybe if we’re lucky, a guy will be stabbed through his skull. It’s all pretty nasty, but what makes the death sequences haunting is how the victims react to being attacked. They weakly struggle, gasp in pain and their eyes will role up in their head. The suffering they go through almost overshadows Savini’s masterful SFX. The most iconic kill is when a naked chick is impaled by a pitchfork in a shower. Nudity can’t hide blood packs, so it’s one of those moments where you wonder how in the hell the filmmakers pulled that off without creating a snuff film. Was it just me, or was there something very sexual about the killings too? The idea is nothing new as everyone has psychoanalyzed the genre since “Halloween”, but usually the emphasis is on the ‘male’ killer ‘penetrating’ the female’ victim with something ‘phallic’. Here, when someone is killed, their death cries almost sounded like they were having sex. Maybe my mind had become twisted and perverse, or maybe the director wanted to exploit the people who look WAY to deeply into these kinds of movies. 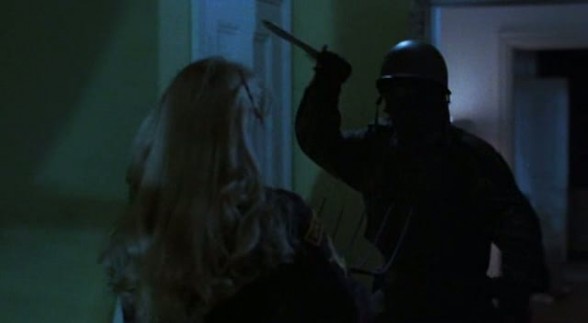 But what about the suspense? “The Prowler” probably should’ve credited John Carpenter and Sean Cunningham as co-directors, because (the actual director) Joseph Zito just re-uses their ideas. You have the voyeuristic killer cam, familiar spooky musical zingers, the ominous Crazy Ralph-esque warnings, plenty of boo-scares where characters would grab each-others shoulders and make them jump. The score is frighteningly similar to the one from “Friday the 13th” and many of the ‘empowering’ shots seemed specifically designed for Michael Myers. A few scenes definitely struck me as derivative and the argument could possibly be made for plagiarism. Now, try to follow the connection here: “The female lead hides under furniture and is hunted by a pitchfork wielding maniac, but her position is given away when she is harassed by a rat”. What? You think I’m talking about “Friday the 13th Part 2”? I was referring to “The Prowler”! Although I don’t know who ripped off who, “Friday the 13th Part 2” already has some suspicious similarities with “The Burning”, so “The Prowler” might be innocent this time around. But even though I’m giving the movie a hard time and even though it is certainly ripping off better slasher flicks, “The Prowler” at least pulls it off fairly well. The suspense is pretty nerve wracking and the jumps were often genuine. It’s often briskly paced compared to many of its contemporaries, not relying so much on excessive padding. I also liked the lighting, which is dark enough to be spooky but I never had any problem deciphering what was going on- a trait lost on most modern day slasher flicks. God, can you remember when horror flicks didn’t have shaky camerawork too? Good times…Good times…

The story is not really a mess, because it’s a complete disaster. The plot is more-or-less “My Bloody Valentine” with a different gimmick and the removal of a love triangle. That in itself would be fine, but “The Prowler” boasts a predictable mystery with some bizarre red herrings. The false suspects act incredibly villainous so we can presume they’re the killer, but the problem is they don’t often fit the body type and we’re just not f@cking stupid. If you’re trying to protect a girl, WHY ARE YOU ACTING LIKE YOU’RE GOING TO MOLEST HER?! Why was that character even there? Were they following the actual killer? Or was the killer following them? I could forgive this, but the killers motivations are vague, the inclusion of the Major never goes anywhere despite so much material building upon him and many subplots aren’t resolved as much as they’re forgotten- although I did like how a lot of the victim fodder end up not being victims. In a way, I’m reminded of Lucio Fulci’s “City of the Living Dead”, where it often feels like they were writing the story as they were going, not caring about any form of continuity. Zito wanted a scene where they find a newly dead girl in a coffin, even if it makes no sense for the killer to put her there. The ending is a disappointment in general, even though it contains some intense confrontations and an awesome ‘head exploding’ death. We needed some Mrs Voorhees-styled exposition, which we didn’t get, and maybe a more epic final scare. It wasn’t a bad final scare, but almost everyone responded with “Huh?” instead of “EEEK!”. As for the villain himself, I thought the idea of a military vet being the killer was underused, although what we got was still pretty unique. I could’ve done without the ironic rose, but the outfit was spooky and I liked his choice of weapons. He was an imposing killer with a cool gimmick and I wish they made a franchise surrounding him.

But “The Prowler” was a slasher specifically designed for slasher fans. It gave us good suspense, GREAT gore and even some sex. The two leads were likable and had some chemistry, even if their relationship lacked a back-story. Was it just me though or were they implying that the heroine may have had feelings towards the drunk asshole? I’m not sure what that scene was about of her looking at him through the jail bars. Maybe it was part of a discarded subplot, which almost makes sense considering “The Prowler”’s plot almost seems entirely comprised of discarded subplots. So if you lack the love for the 80’s slasher, “The Prowler” is definitely not your cup of bloody tea. But if you do like snuggling with 80’s slashers, then you might as well strip naked, hug, kiss and be penetrated with a pitchfork…but in a sexy kind of way, because “The Prowler” is for you. It’s my kind of movie, so I liked it.

Nudity: There is some, as one would expect.

Overall: “The Prowler” is a slasher movie for slasher fans. Watch or avoid it based on your feelings towards the genre.