Plot: “Prometheus” is a loose prequel to “Alien“, taking place in the near future where space travel and Artificial Intelligence has become commonplace. Two doctors- Elizabeth Shaw (Noomi Rapace) and Charlie Holloway (Logan Marshall-Green)- discover evidence of extra terrestrial life-forms (referred to as ‘engineers’), who possibly created the human race. Their research leads to a space expedition being funded. They travel to a remote part of the Universe, but what they find is not what they expect. The film also stars Charlize Theron (Vickers), Michael Fassbender (David), Idris Elba (Janek), Guy Pearce (Weyland), Sean Harris (Fifield) and Patrick Wilson as Elizabeth’s Father (cameo).

What’s fascinating about “Prometheus” is that you practically see a war taking place within the content of the film. On one side is a thought provoking, thematic, science fiction film filled with high levels of emotion and a sense of exploration. On the other side is a very conventional film that caters to the masses in the worst ways possible. Sometimes it’s very intelligent and innovative. Other times it is very silly and familiar. Luckily, even when the script fails “Prometheus”, it can always fall back on spectacle. Dumb or smart, the movie sure looks gorgeous! Ridley Scott wanted to make an ambitious movie that wasn’t just about an alien killing people. It would be about creation, destruction and what comes in between. Scott reached his destination, but sadly relied on some cheap tricks to get there.

Just look at the characters. The conventional side of the movie demands that they all fit their stereotypes. You have the person in charge who we hate because they’re carelessly cold hearted, the good natured Captain who looks after everybody, the spiritual scientist, the cynical scientist, the goofy scientist, the asshole who spends the movie complaining and lots of victim fodder whose characters you won’t even remember. Yet at times the movie almost seems like it’s going to explore these characters. Maybe they are more than just the stereotypes put on paper. Unfortunately, they immediately return to their predictable role, and their fates are what you expect of them. Even when they DO develop, that development comes from the limitations of their caricatures. Note that I’m not complaining about how fleshed out they were. I think the movie did a relatively good job at that. But compare this to the characters from “Aliens“. Characters who are established as cowardly, shallow assholes ultimately become heroic and reliable. They broke free of the conventions they were born from and we loved them. But not with “Prometheus“, where the characters are stock characters created only to drive the films story and ideas. Luckily, the actors are good enough that they overcome the thin characterizations. They bring energy, charisma and a dramatic edge to their roles, which helped kept my interest. 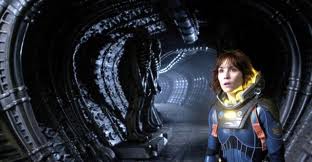 The film also needed a few rewrites when it came to common sense. The characters make some really retarded decisions, the most notorious example being when someone tries to ‘pet’ an alien (idiot). In fact, characters have the tendency to do things solely so they can die or drive the plot. It’s kind of sad when the only person who is marginally professional and cautious is the bitch whom we are supposed to loathe. Yet the writer(s) do a great job when it comes to writing in the thematic material. I liked how the movie explored the complex and often destructive relationships between creators and their creations. Somehow, the writers managed to do what most writers wish they could do, which is SHOW the theme instead of spelling it out for us. This provided lots of subtext for me to chew on and I personally found it captivating.

I also thought pandering to the “Alien” fans was a mistake. The ‘prequel’ elements were forced and pointless additions to the story. It’s supposed to appeal to us fans, but this is distressing for two reasons. The first is that “Prometheus“- while flawed- was working very well as its own entity. These scenes feel out of place, partially because when dealing with a threat that might destroy humanity, the xenomorphs aren’t especially threatening in comparison. Perhaps if they didn’t cater to the masses, then more time would’ve been spent on explaining some of the characters decisions. Why did *spoiler* betray a certain character? What was their motivation? Or couldn’t the movie have given us more of a pay-off when it came to confronting that character? The second problem is that the catering turned out to be pointless because they barely explain a thing. The ship found here isn’t the one found in “Alien“, the creature seen isn’t an actual xenomorph, so why did they bother stressing the prequel route so much? It really felt like the filmmakers would rather just do their own thing, but felt like they had to throw a bone for the fans. Hence, the war between conventional and creative continued.

Is the film scary? Before I get into that, this is another aspect of the film that felt out of place. I’m pretty sure that a weaponized mutation is the alien equivalent of the Government weaponizing the zombie plague, but maybe Governments are just that stupid. But that’s not what bothered me. To me, the horror sequences usually lacked a context. Once again, Scott and the filmmakers seemed to think that they had to throw in a few monster sequences, so they did even if they didn’t feel in tune with the rest of the movie. On the other hand, I can’t deny that these scenes were very exciting. The first real horror scene is startlingly intense, and and the build up was masterful. The rest of the scary sequences were just like this, out of place but chillingly effective. The one scene that did feel at home was the ‘birthing’ sequence, which had the whole audience squirming uncomfortably. It seemed more like it was part of the story. So yes, the movie was sometimes scary. I’m just not sure if those scenes flowed organically with the rest of the movie. 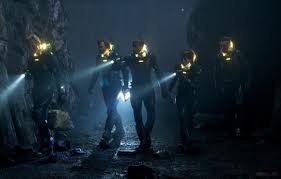 It does seem like I am being more negative than positive, but “Prometheus” isn’t guilty of any cinematic crime that most blockbusters haven’t already committed. Sure, the characters and their actions are lifted from the big book of cliches. Sure, it’s not as intelligent as it wants to be. But it does at least have substance and story wise, it accomplishes far more than most of its ilk. I only seem harsher because it nearly did achieve greatness, making its failures more frustrating. Of course, what people want to experience the most about “Prometheus” is its breathtaking visuals, which never disappoint. Ridley Scott and the crew provide the perfect balance of practical effects and CGI. The sets are massive and detailed, the props are creative and the grim color pallet provides a unique aesthetic. There isn’t a single flawed effect and the atmosphere is pretty interesting as well. Like “Alien“, the visuals are bleak and menacing. However, the tone is completely different. Whereas “Alien” used its world to strike terror in the hearts of watchers, “Prometheus” uses the same world- identical sets and style- to evoke a sense of awe and wonder. The music isn’t scary, it’s inspirational. The characters spend the bulk of the movie filled with hope and excitement. I expect this in a candy coated film like “Avatar“, but “Prometheus“? Yet I actually respect this. The script might be flawed, but Ridley Scott’s direction is very unique.

Which side won the war between conventional and arty? For many, “Prometheus” will be surprisingly average. It will be a quasi-horror film full of forgettable and one dimensional characters. For others, it will be sheer genius and its conventions only will make “Prometheus” more accessible. As for me, I think they could’ve done better. They could’ve fit the horror sequences more cleverly within the story, deepened the characters motivations and made them more memorable. Yet the movie managed to engage me. It could be exciting, edgy and jaw dropping. But it also made me think. Perhaps the war ended in a truce and I liked that. It’s not too preachy or too self indulgent (how I feel about “2001: A Space Odyssey“) and it’s better than most conventional spectacles. It’s like “Close Encounters of the Third Kind“, but with a horror twist to it. My only real regret is that the movie didn’t leave the impact that its predecessors did. It’s downright underwhelming in comparison. But I guess that’s just my expectations talking and for all its faults, “Prometheus” turned out to be a pretty good movie.

Note: The film is being listed under ‘horror’ because it does have a handful of intense or scary sequences.

Violence: Rated R worthy. It’s sort of brutal, but not too gory.

Nudity: Nothing explicit, but there is a lead in to an off-screen sex scene and the women are in their underwear at times.

Overall: “Prometheus” is good, but remember it’s not really a horror film and expecting greatness will only lead to disappointment.