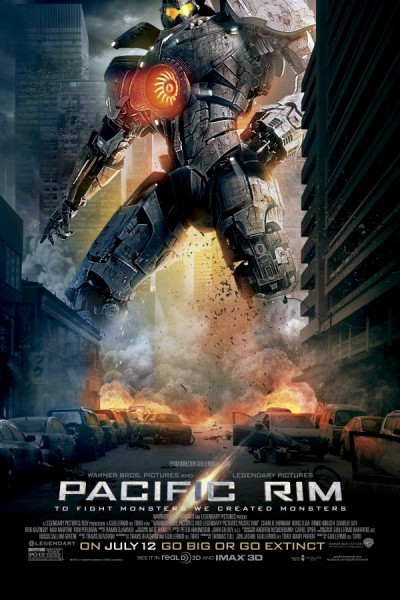 Plot:When giant Monsters (called Kaiju) attack from beneath the Ocean, humanity builds giant robots (called Jaeger’s)  in order to stop them. But when the Kaiju begin to adapt to humanities’ strategies, it’s up to two troubled pilots- Raleigh Becket (Charlie Hunnam) and Mako Mori (Rinko Kikuchi)- to join together and save the day.

“Pacific Rim” wasn’t my most anticipated film of the summer, it was my most anticipated film of the ‘year’. After all, a man like me who is renown for his fine taste in cinema considers ‘giant robots fighting giant monsters’ a premise worthy of Stanley Kubrick. Actually no, this premise makes Kubrick its bitch. “2001: A Space Odyssey” might be lauded for its thematic material, groundbreaking special effects and epic symbolism, but it would’ve likely been the greatest movie ever conceived if Kubrick cut out three hours of “spaceship moving slowly while classic music plays in the background” scenes and replaced it with “giant robot beats giant Monster over the head with ship” scenes. My expertise on fine artistry in film began when I saw “Godzilla’s Revenge“, which is in many ways like “2001: A Space Odyssey” and I believe Kubrick even acknowledged this in plenty of interviews. Since that moment, I’ve been a HUGE, HUGE Kaiju fan. Plus, they were going to fight mechas! “Pacific Rim” had all of the ingredients for success and the recipe was being brewed by Guillermo del Toro (“Pan’s Labyrinth“), one of the finest action directors of today. So my ass invaded the nearest seat in the closest (IMAX) theater and I watched in anticipation…as yet another Summer Blockbuster of 2013 disappointed me…”Pacific Rim” is still pretty good, but it just lacked the punch- which would’ve presumably been provided by a giant robot- that I desired.

To clarify what I mean, I could probably praise nearly every aspect of the movie. But I could also point out a lot of areas where it could’ve improved. Lets go ahead and begin with the spectacle. The CGI is flawless. I watched this on IMAX, where the strengths and weaknesses of special effects are magnified, but the mayhem never looks too much like its CGI or being filmed in front of a green screen. Obviously CGI and Green Screen effects were used, but “Pacific Rim” successfully cast its illusion on me and I was never taken out of the movie due to faulty special effects. That immediately makes it better than “White House Down“, which couldn’t even make vehicles which exist in real life look convincing. Unfortunately, I did feel that del Toro underperformed in the design department. The robots look different in the same way the Transformers did in “Transformers“. If you look at them close enough, you can see they have different shapes and colors, but you won’t be able to notice much of them in the midst of an action scene. Annoyingly, the one Jaeger with its own unique appearance is the most underused. I mean, that one had six freaking arms with spinning blades! WHY ISN’T THAT THE MAIN JAEGER! Even though each robot has its own specialties, they never get the chance to show it off. Why emphasize the power of one if they get overpowered immediately? Or the speed of another when it’s just not fast enough? The monsters are a bit better but once again, the action is too quick and disorienting that the movie never lets us linger on what they look like. Eventually, their designs began to blur into a single entity. If you’re expecting larger scale versions of the creatures from “Hellboy 2” or “Pan’s Labyrinth“, prepare to be disappointed. Still, even though I made a comparison to “Transformers“, I would say it’s superior in that at least there is SOME flavor to the robots/monsters and their weapons. It’s not that their designs are generic, I just expected more from Guillermo del Toro. But speaking of scale, man these looks look huge! 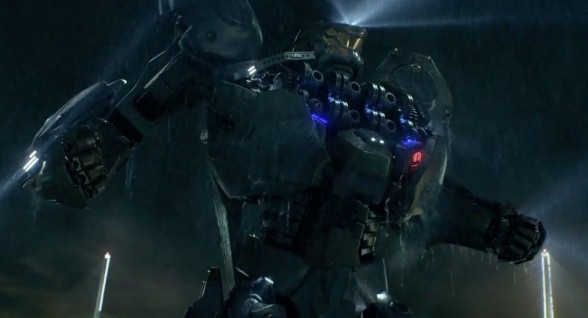 The action might be a bit too fast paced at times and I will admit that I would occasionally lose track of what is happening, but at least the editing usually kept it coherent. If I ever was lost, it was due to the battles taking place in the middle of a storm at night. But usually, I could follow the action and always found it to be gripping. While I wish the Jaeger’s used more weapons, as it doesn’t make sense fighting larger creatures with your fists, del Toro dreamed up plenty of epic ways to keep the fights engaging. Even if the monsters began to look alike after a certain point, their clashes with the robots never became stale. del Toro did a superb job at creating tension too, always showing that the pilots are in peril despite being protected by heavy armor. Unfortunately, it’s obvious where the filmmakers chose to cut corners. The most exciting sequences were when the monsters attacked the city, but the majority of the battles take place in the Ocean. That setting does get kind of old…although I’d usually just shrug and continue enjoying the ride as soon as the next brawl began. Annoyingly, the 3D is awesome during the first action sequence. I kept flinching at the onslaught of cars being thrown at me. But then it’s like…the 3D just stops. It never obscured the action, but didn’t end up adding anything too it either.

The script is very conventional, although it will occasionally throw in a surprise that got me. Raleigh is haunted by the death of his brother, so that makes him troubled and edgy, but I did like how he never becomes unpleasant for it. The same goes for Mori and you expect them to be enemies until they start falling in love for no reason,, but that never happens. They get along well from the beginning and even though a romance is implied, it’s never made explicit. Everything else though is pretty familiar. Their leader (Idris Elba) acts like every other positive example of the man in charge and you know what he’s going to do long before he does it. There’s a nasty rival who constantly bitches about our heroes, but gets his ass kicked with ease and inevitably has to be rescued. That character arc was very clumsy and I wish they didn’t bother. Furthermore, despite the attempts at fleshing out the heroes, their character development is rather erratic. It’s simultaneously rushed and overly drawn out. This takes a lot of the running time during the middle block, which slowed down the pacing. I personally wished they trimmed maybe 10 minutes from that segment, but at least the questionable attempts at character development never caused the feature to collapse under its own weight, which makes “Pacific Rim” better than “Man of Steel“. Even if some of the subplots are handled awkwardly, I didn’t feel they tried to cram too many different stories into a single narrative, which meant it less frustrating than “Iron Man 3“. “Pacific Rim” has a very cheesy sense of humor that left me and many others rolling their eyes. Guillermo del Toro has always struggled with comedic dialogue in his American productions and this is no different. Still, once I got used to it, I began to enjoy the attempts at comedy, even if I wasn’t sure whether I was laughing with or at “Pacific Rim“. Startlingly, the quirky and loud humor never felt out of place with the darker elements of the story, so I had no issue with the tone. That alone makes it better than “The Lone Ranger“. Overall, the script isn’t any worse than the majority of modern day summer blockbusters and it might even be a bit better. It resists some cliches and I did find myself caring about the plights of the characters, even if they might’ve spent too much time on them. But why is it Guillermo del Toro always seems to have generic screen-plays for his American films? His Spanish productions show he can be just as good of a story teller as he is a visual artist. But alas, “Pacific Rim” is more about the spectacle than script, so any flaw I brought up in this paragraph can be dismissed with a shrug. 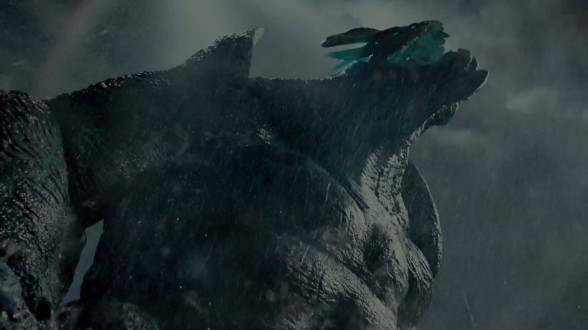 For all of my complaints, I had fun. “Pacific Rim” delivers everything you want out of a Summer Blockbuster, but I think I was hoping that it would be something more. I was entertained, but I don’t think it’s going to stay in my memory the same way that the majority of del Toro’s flicks have. It’s a case of ‘it was pretty good, but it could’ve been better’, both when regarding the movie itself and the action within said movie. I would’ve still given it a 3 star rating though, because I am a Kaiju fanboy and it is in my nature to jerk off all over these kinds of projects. Would you think less of me if I admitted that I enjoy ALL of the Godzilla movies on various levels? Well, maybe not “Tokyo SOS” or “Godzilla Against Mechagodzilla“, because those are bland and they lack the benefit of nostalgia. But giant Monsters tend to make me squeal. The reason I’m going to be harsher with the rating is that the audio kind of sucked. Maybe it was poorly mixed or maybe it was merely my theater, but the sounds and the music kept drowning out the dialogue. This was especially apparent during the opening narration, where I literally could not make out a single word. Maybe this isn’t the movies fault, but it did damper my enjoyment level somewhat. When I watch it again on DVD or Blu-Ray, I will re-evaluate my opinion and may increase the rating.