PRIDE AND PREJUDICE AND ZOMBIES (2016)

(Written and Directed by Burr Steers)

Plot: As a zombie plague scourges through Victorian England, independent, strong and weapon wielding Elizabeth Bannett (Lily James) deals with the pressures of marriage in this quasi-parody (?) of the classic “Pride and Prejudice” literature.

I’m not familiar with Jane Austin’s “Pride and Prejudice“…presumably because it did not contain Zombies and it’s common knowledge that a classic romance satirizing sexual politics, the class system and love at first sight just doesn’t work without hordes of the undead trying to eat everyone. I’m sure the source material is every bit as much of a masterpiece as literature critics claim it is, but the only way I would ever turn my gaze upon “Pride and Prejudice” is if “And Zombies” was added to the title. I’m a sucker for absurd concepts like this, which is arguably why I’m one of the few people who thoroughly enjoyed “Abraham Lincoln: Vampire Hunter“. I hope this bizarre mating of genres and concepts continues, as the world needs “A Tale of Two Cities That Have Been Enslaved By Killer Robots“, “To Kill a Mockingbird that Eats People“, “Martin Luther King Jr Vs The Racist Mummy” and “Donald Trump: United States President- A Horror Story“. Yet despite “Pride and Prejudice and Zombies” embodying everything I love about surreal filmmaking, it…sucks…It really, really sucks…embodying everything I also hate about surreal filmmaking. I’m surprised that critics and general audiences were more indifferent than hostile, as “Pride and Prejudice and Zombies” is the same kind of bad that made “The Fantastic Four (2015)” such an easy punching bag. Nothing about this movie connects and I immediately realized that “Pride and Prejudice” and “And Zombies” weren’t meant to be together, as it’s going to be too much of one to be the other, so it’s difficult to distinguish the target audience. There isn’t a lot of zombie action, with the PG-13 restricting the gore, which will alienate zombie fans. Yet it’s too gruesome for those who want a chick flick or any kind of romance story and this audience will likely find the inclusion of the walking dead to be distracting and silly.. But above everything, it’s just bad.

According to Lily James, director Burr Steers instructed the cast to ‘play their scenes as seriously as possible’, because that would be funnier than ‘winking at the camera’. I actually agree with this strategy, as part of the reason why I enjoyed “Abraham Lincoln: Vampire Hunter” (both of these films were based on books by the same author) is how the absurd material was treated with the utmost sincerity- which I think is hilarious. Unfortunately, his vision lacks consistency, as some of the actors and actresses seem to believe they are in a comedy (Matt Smith) or struggle with maintaining a straight face (Lena Headey), while others perform with genuine conviction (Lily James) or over-sell the drama so much that it becomes unintentionally comical (Sam Riley). These vastly different styles of performances made it difficult for me to tell what I was supposed to feel, because they kept disrupting the tone. How am I supposed to find something humorous, when the proceeding scene will be tear jerking? And how can I make an emotional connection with the drama when it’s hard to take seriously because it’s following something goofy? Throughout a lot of the first half, I couldn’t decide if this was trying to be a ‘so bad, it’s good‘ type of film as the dialogue felt so awkward (fake Victorian era speaking) and the stiff delivery of some of the actors was even more awkward. The ‘battle poses’ of the actresses looked silly as well, even though I think they were supposed to come across as bad-ass. Eventually the lines started to become a little more natural and the cast must’ve gotten used to this style of writing, because the acting progressively improved until it lost all of its unintentional entertainment value, while not being good enough to redeem the shortcomings in the script. I think the problem was that the exposition establishing this setting, zombie rules, the personalities and backstories of the characters was just too dense, as there is A LOT of information we have to process and the cast struggled with making the difficult material work. Once we got past the clunky introduction phase, the ‘so bad, it’s good’ element- which wasn’t even working for me anyway- vanishes and you can see that the filmmakers’ are trying to make a quirky, cool and dramatic movie…even if they’re failing. 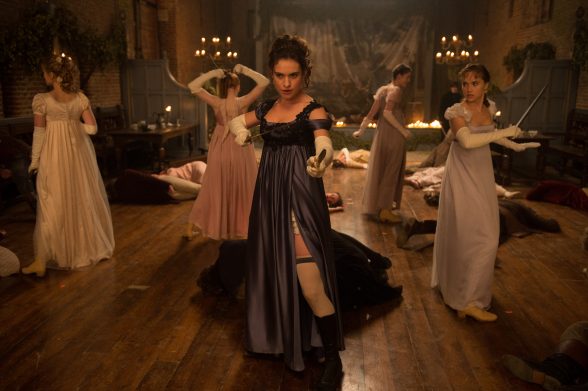 If you go choose to court “Pride and Prejudice and Zombies“, then don’t expect much in the “and Zombies” department, as they only sporadically show up. The PG-13 rating ensures that we won’t get a lot of violence, so the zombies just drag the majority of their victims off-screen and spastic editing mostly obscures their own destruction at the hands of the zombie hunters. CGI is used in place of makeup effects for their ghastly appearances, but it looks pretty phony and they all seem to share identical wounds, so the creativity was minimal. One of the more stranger quirks to this worlds’ zombie plague is that there are different stages of becoming an undead, so it’s not uncommon to see a walking corpse who can talk and act like an overacting human. This admittedly intriguing concept is wasted though, so I’m not entirely sure why they bothered. The martial arts choreography might be OK, but the camerawork, editing and ESPECIALLY the dark, murky lighting made it difficult to decipher what was going on. There were even times when I had difficulty telling who was who! The action itself is campy, but the visual style surrounding it is dreary, with this contradiction draining away any sense of fun. But there are large chunks of screen-time where the zombie plague is forgotten and you start thinking you’re watching “Pride and Prejudice” (presumably with inferior acting). I really couldn’t bring myself to care about the characters or their relationships- both romantic and platonic, as all of their interactions are hostile and unpleasant. The bickering got on my nerves immediately, even though from what I understand about the source material, the snarkiness is a large part of its appeal. Believe or or not, the dialogue does eventually develop a certain amount of wit, but these lines feel like they were meant to be delivered dryly…whereas the actors favor broader and noisier deliveries. The cinematography is very claustrophobic with its use of dark lighting and close-ups, so I always felt like I was trapped in a small room with some very obnoxious characters. So to me, this was a shitty interpretation of “Pride and Prejudice“, while occasionally shifting into being a normal bad zombie movie.

“Pride and Prejudice and Zombies” also bites off more than it can chew, as it introduces way too many story-threads that it doesn’t have time to explore. I actually forgot about a lot of the convoluted origins of this zombie plague, which become important during the finale, because there was no need to bring it up during the middle block. They introduce Lady Catherine (Lena Headey) as this awesome zombie hunter and then present her as a potential antagonist, but in the end…she does absolutely nothing! She doesn’t kill any zombies. She doesn’t fight Elizabeth (Lily James). She only has about 3 minutes of screen-time! Why is Charles Dance in such a throwaway role? What was with that Four Horseman angle? We never even see what happens to them, although their identities are vaguely implied, so maybe that subplots’ conclusion was left on the editing room floor? The possibility that zombies can retain their humanity if they choose to do so might be an interesting spin on the ‘and Prejudice‘ part of the title, as Darcy’s hatred towards the undead does resemble racism and is sometimes treated as such…except the film decides to TAKE HIS SIDE on this issue, murdering a potentially intriguing idea that the script F@CKING SET UP ITSELF. They throw in these strange additions like how the wealthy study Japanese arts, while lower classes study Chinese Arts and this concept is also used to criticize prejudice- as the snobs consider Japanese to be superior. But then the protagonists act just as pompous regarding their Chinese influences, so it gave the film an accidental ‘China is better‘ message, presumably to cater to that market. This doesn’t even make sense to me, as I’ve never seen a culture clash amongst a people who didn’t even create said cultures…unless you count Otaku…Okay, this movie becomes a little funnier if you think of England adopting the Otaku lifestyle. Even the Feminist message is lost when you consider that the men are the ones driving the story. Sure, the women will occasionally show up and save the day, but only after the men have already done the majority of the heavy lifting. The finale is not built around Elizabeth, but about Darcy and his conflict with the primary antagonist. Our lead protagonist is practically an afterthought! The ladies are also presented as dumb, as they’re prone to being seduced, manipulated and walking alone IN THE F@CKING WOODS DURING A F@CKING ZOMBIE PLAGUE. If you’re going to have your supporting characters acknowledge that these are strong, intelligent and independent women, then maybe don’t write them as morons who are emotionally and physically dependent on men. 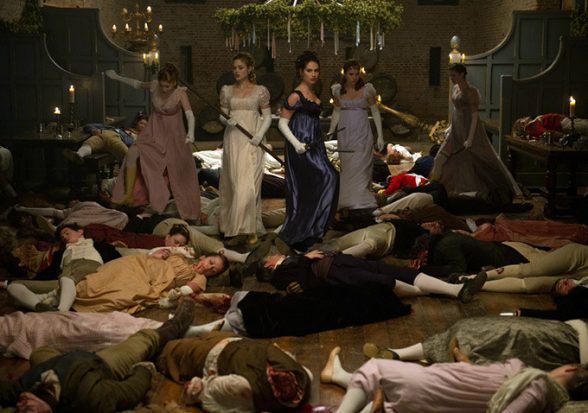 What makes this sad for me is not only will “Pride and Prejudice and Zombies” be unable to make me giggle at the sound of its name (because I can no longer associate it with ‘fun’), but you can feel like there was genuine inspiration behind this concept. The dialogue- as long as it’s not exposition- obviously took a lot of love and care to craft and the actors are mostly enthusiastic- if often misguided- in their performances. There are some cool visual ideas, such as a decapitation from the POV of the zombie. I did occasionally laugh, like the gag involving the painting of Lena Headey slaying Zombie Lucifer. Two things must’ve happened during its lengthy development phase, the most obvious being post-production tampering. There are some odd editing choices, where scenes will jump with minimal warning, making it difficult for my brain to process what just happened. There are signs that maybe the studio enforced changes and cut out a lot of the content, which would’ve ideally let the narrative breathe and maybe even give us our much needed gore. The other possibility is that the novel this is based on just wasn’t meant to be adapted into film, although I’m wary of claiming this because I haven’t read it myself. I felt like there was this big and epic story here, but the filmmakers lacked the budget and time to showcase it. Why else would you have a major zombie war going on on the borders of England, but instead focus on characters’ moping inside a house? I’m not sure what went on behind-the-scenes, but the end result is sloppy as hell and proves that some combinations just were not meant to go together. Yet part of me also suspects that this will eventually develop a cult following, as it is pretty unique. I’d usually be the fanatic of such cults, but the badness conquered the weirdness for me, so I’ll stick to preaching the gospel of killer, fire breathing, flying, zombified sushi.

Violence: PG-13, although I guess they push the rating to its limits.

Overall: “Pride and Prejudice and Zombies” was a trainwreck, one that admittedly I found to be an enjoyable challenge as a critic, but not really an enjoyable movie.