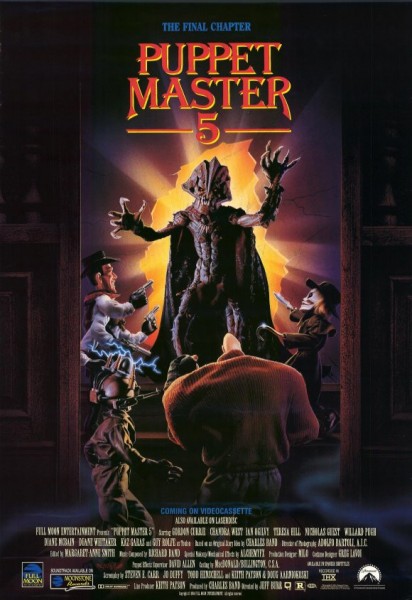 Plot: Rick Myers (Gordon Currie) and his friendly, homicidal puppets continue to fight the demon cult who wants to eliminate everyone who has discovered ‘the power’ to re-animate…puppets…

I’m laughing right now, although I certainly wasn’t laughing during my viewing of “Puppet Master 5“, which didn’t even deserve the deriding laughter that I gifted “Puppet Master 4“. The previous sequel needed a stronger antagonist, as the Totems didn’t put up much of a fight against our beloved demon  puppets and when the remaining one did, it was only because everyone unanimously came down with a case of the stupid and that caused them to forget about teamwork. “Puppet Master 5” has the desired final villain and this new baddie is significantly more threatening than his underlings were. The problem is…everything else. This worthless piece of crap relies on excessive padding and story-threads that were not really necessary in the first place. It seemed to me that the best solution would be to combine both sequels, incorporating the finale and villain of “Puppet Master 5” into the story of “Puppet Master 4“. I doubt that the final result would be a good movie, but at least it would be a complete movie. Yet I am under siege by a fit of giggles because I hadn’t realized until now that THIS WAS ORIGINALLY THE PLAN. I’m not sure why Full Moon changed their minds and chose to chop off the third act from “Puppet Master 4” and develop a whole other movie around it, but both films were critically hurt in the process. “Puppet Master 5” is technically superior to its predecessor, moving from ‘hilariously terrible’ to…just ‘terrible’…Damn it! I can’t even laugh at the badness anymore. Instead I just have to be bored.

Sutekh was also the antagonist in the previous film, but outside of being an awful special effect and ordering his minions around, he didn’t do much. This time, he takes a more active role and uses a new, more advanced, totem as his avatar. This new creature is a major step up from the previous totems, having a more menacing design and a variety of powers at its disposal. He is a much greater threat and the most entertaining parts of the movie is when we see him clash with the various puppets and ACTUALLY OVERCOME THEM- without it being too one-sided. All the puppets from “Puppet Master 4” return, but each seemed to have bigger roles. Even Jester actually does something, for once. Hell, my bestest buddy Torch has finally returned after winning my heart in “Puppet Master 2“. Alas, he doesn’t seem quite as impressive, but a heel-face turn will likely do that to you. I thought it was funny how he just appears, as if he has been there the entire time. The fights are better, primarily because it seems less like a child smashing his toys together and more like a light show. The special effects are significantly bigger, albeit only sometimes better, but the grand finale was far more ambitious than what part 4 delivered. This is the kind of explosiveness that the franchise needed at this point- cheesy, over-the-top fun. Jeff Burr has improved his directing skills and seems to know how to film the puppets so that they’re more lifelike this time around. Outside of Sutehk’s appearance and Toulon’s head being superimposed on Decapitron’s body, I can’t say any of the special effects failed to the point of affecting my enjoyment. I’d still say the previous Puppet Master entries had more convincing creatures, but what we got here wasn’t bad for the time/budget.

So…why does this movie suck?

Because when the Totem isn’t scuffling with the puppets, very little seems to be happening. Disposable characters will wander through the halls for what feels like hours before encountering the Totem, but will trip over themselves when trying to escape so that they may die more easily. I liked Gordon Currie as Rick in the last one, but he’s much more serious this time around. His charm was his greatest attribute, but he never got the chance to really use it here and isn’t a good enough dramatic actor to carry the movie. Ian Ogilvy (Jennings) was almost interesting, as you aren’t entirely sure whether or not he’s supposed to be evil. But the way the character is resolved can best be summed up as shit writing- it made no sense and was too predictable. The other surviving girls return, but I’m not entirely sure why as the psychic never comes into play and the love interest is just as bland as before. Jeff Burr may have stepped up his game, but he didn’t climb far enough to be considered ‘good’. This meant that the unintentional hilarity was gone, while tedious stalk sequences and lame character interactions take the center stage. There still isn’t any suspense, atmosphere or style. Whenever something bad happened in “Puppet Master 4“, I would find myself giggling. Whenever something bad happened in “Puppet Master 5“, I’d sigh in annoyance. But usually, I was just bored. 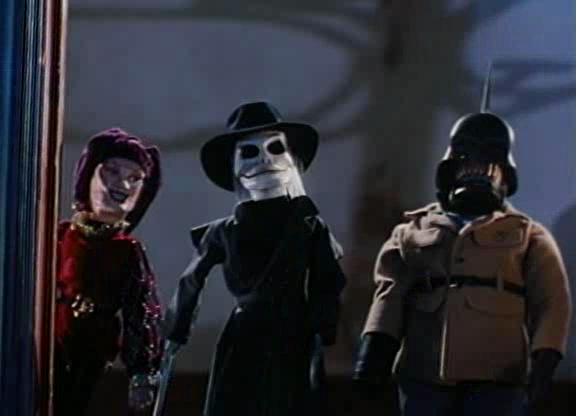 The introduction in the police station was bad because none of it was believable, but also because it leads to nothing. It was there simply in order to pad out the running-time and maybe introduce us to Jennings- whose connection is tenuous. We spend too much time with victim fodder, whose death scenes are not even that bloody. It’s not scary, but it’s not fun either. Occasionally the film would wake up and produce something watchable, but I would struggle waking up to enjoy it. “Puppet Master 5” has enough legitimate content to fill out a third act, with the rest being filler. The studios exploited its audience for more money by splitting up one narrative into two movies and arguably killed the integrity of the franchise in the process. This project would’ve been so much better if they attached the finale of “Puppet Master 5“- along with the various scenes of the grand Totem battling the Puppets- to the ending of “Puppet Master 4“. “Puppet Master 5” was no fun and I’m terrified because “Curse of the Puppet Master (PM6)” is supposed to be worse…and that isn’t even regarded as the worst of the franchise…

Violence: Rated R- I think it’s grislier than 4, but still not gory enough to match with the first three.

Nudity: There is some sexuality, but I don’t recall any explicit sex or nudity.

Overall: “Puppet Master 5” was a boring conclusion to the original continuity. Just skip through the parts that don’t contain demonic puppet action.