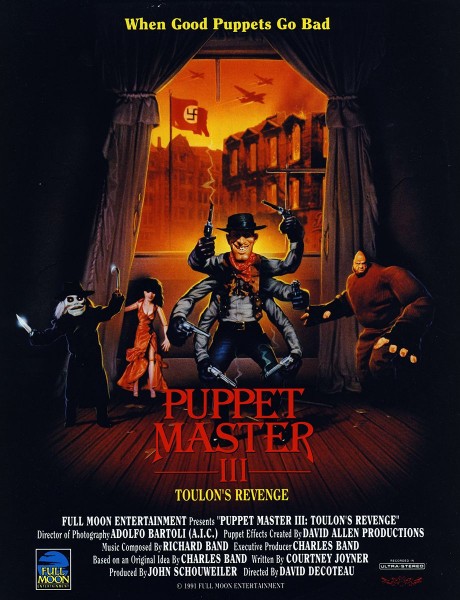 Plot: Set during the Nazi occupation of Germany, Toulon uses his demonic puppets- who have yet to turn evil- to exact vengeance on the Gestapo, who murdered his wife.

“Puppet Master 3” has FINALLY resolved a question that has been plaguing me since the first film, which is: “What happens when you cross demonic puppets with nazi’s?”. The answer? Pure, B-movie awesomeness. One of the (many) issues I had with “Puppet Master” is that the puppets are introduced as innocent, with the implication that they were going to taking on the Gestapo, but then the actual plot happens and…It seems like a totally different movie, lacking Nazi’s and turning the puppets into villains. Were we supposed to like them? “Puppet Master 2” continues the trend of confusion by changing the seemingly benevolent Toulon into an antagonist, with the puppets being more sadistic than ever…and yet it’s cathartic when the puppets inevitably turn on their master. It is only inevitable that they become anti-heroes and I’m surprised it has taken them this long to do so. “Puppet Master 3: Toulon’s Revenge” showcases Blade, Leech Woman, Jester and the other demonic puppets inflicting brutal punishment on deplorable Nazi’s and the filmmakers are clearly having a blast with the concept. Demonic Puppets Vs Nazi’s!!! Puppets terrorizing Nazi’s!!! All I have to do is repeat the same thing over and over again, which is enough to sum up my feelings towards this film.

Oh sure, I can elaborate and remind you that this is a quintessential B-film. The sets, dialogue and phony accents are not going to convince you that this is taking place in 1940’s, Germany. There is some bad acting, blatant continuity errors and the one big stunt is upstaged by a poorly disguised body double. I think “Puppet Master 2” tended to be creepier, but I also wasn’t under the impression that “Puppet Master 3” was intended to be a traditional horror film. We take sadistic glee in watching the puppets tear apart their victims- who actually deserve it this time around, so we’re not supposed to be scared of them. The puppets are all back, although I thought it was strange that the most popular one (Blade) has very limited screen-time, and the special effects are still pretty good. The new entry is Six Shooter, a cowboy who fires mini-bullets, but I was a little disappointed with him. He’s rather unimpressive compared to the imposing Torch and I think it would’ve been grislier if his guns didn’t do the damage of normal guns. Maybe if they worked more like BB’s, inflicting more pain but not being as fatal, I would’ve enjoyed the character more..  But despite drifting more into the action genre, the kills haven’t lost their mean streak. Every death is very cringe inducing and the filmmakers finally produced a different kind of finale that I actually liked. I also thought the pacing was much smoother than its predecessors, as I never become impatient or bored. Finally, while some of the acting was bad, I did enjoy the key players. Guy Rolfe (Andre Toulon) lost me when his wife was shot, but managed to be sympathetic without losing that deadly edge. He is EASILY the best of the protagonists, so far. I also loved Richard Lynch (Major Kraus) as the villain, who reminded me of Klaus Kinski…who inspired Blade’s design…and Blade doesn’t seem to exist at the start of this movie…Hmmmmmm…#Foreshadowing. The kid was pretty annoying though. 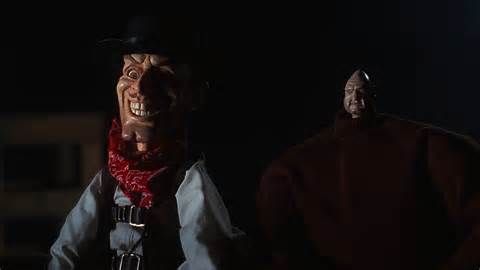 The continuity is pretty screwed up, as I don’t understand why Toulon would’ve taken his own life, since these puppets could easily take out two Nazi’s. Before, I was under the impression that the puppets had never killed anyone, but they obviously weren’t banking on making a prequel quite yet. It’s also hard to reconcile the Toulon of “Puppet Master 3” with the Toulon of “Puppet Master 2“- especially in regards to how he treats Leach Woman. Yet this is the first time I felt that the plot wasn’t a convoluted mess. I understood everything because the presentation of all the information was much more coherent. While I made fun of the cheap sets, I did think the night shots of those streets were pretty moody. David DeCoteau is a very workmanlike director compared to his predecessors, who tended to be more experimental with their styles, yet this also means less self indulgence. The story is simple and the execution of said story was just as simple, with the primary emphasis being on showing its target audience a good time.  But more importantly…demonic puppets killing Nazi’s!!! Who cares about all this critic crap when  “Puppet Master 3” delivers on that alone. It’s silly, cheesy and maybe even a bit dumb, but I was thoroughly entertained.