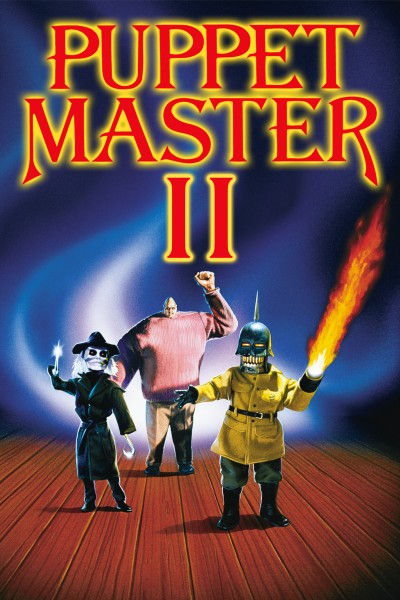 Plot: A group of paranormal researchers investigate the events of the first film and find themselves being hunted by the murderous puppets, who are now working for a mysterious, bandaged man.

If you remove the nostalgia filter lens, you might be surprised to learn that “Puppet Master” was not a very good movie. More than likely, you are only remembering the admittedly cool finale and are projecting that onto the rest of the film. As I plan on reviewing this entire franchise throughout March of 2015, this caused me quite a bit of distress because the general rule is that sequels become increasingly inferior…and I have like 10 more of them to go…Ugh, this is going to be a loooooong March…Nevertheless, I have to admit that the first sequel surpassed my expectations. “Puppet Master 2” is not exceptional horror and carries its own bag of flaws, but at least it was ‘sometimes’ entertaining and delivered more of what I expected from the previous one. As a bonus, it’s also superior on a technical level- delivering better direction, cinematography, writing, editing and acting…Although ‘superior’ does not necessarily translate into ‘good’.

David Allen was primarily known as an SFX exert, doing the visual effects on almost 50 films (including the first five of this franchise), but it’s a shame that he didn’t direct more as he doesn’t do a bad job here. He uses creepy and colorful lighting to create quite a bit of haunting imagery- in contrast to the ONE creepy shot of the first film. He has a pretty decent grasp on mood and the interiors of the hotel always had a somewhat spooky feeling of unease. I was never scared, but “Puppet Master 2” is much better when it comes to developing atmosphere and suspense- even if none of it stands out as amazing. The puppet crew is back and it seemed like they were always captured in angles that allowed them to look more believable and their naturally creepy designs continue to impress. They add a new monster to the mix, Burner, who is bulkier, made of steel and breaths fire (freaking awesome). As of “Puppet Master 3“, he is my favorite of Toulon’s creations. While “Puppet Master 2” is still pretty cheesy, I felt the director had a stronger grasp on the tone of the picture. At no point did I ever stop taking those murderous little devils seriously, even if their boss was another matter. I also appreciated the interesting and somewhat experimental transitions, which proved to me that the director was invested on a creative level and wasn’t just shilling out a marketable product. I did think the ending was pretty stupid for two reasons, the first being that it was significantly campier than the rest of the movie. The second was that it was a bit too derivative of its predecessor, so the shock value is gone and the previous finale simply had more bite. 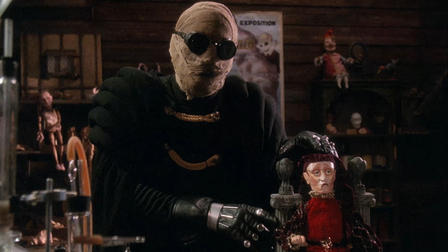 Whereas “Puppet Master” took way to long to get going, “Puppet Master 2” brings on the violence relatively quickly. I was stunned when the characters actually noticed the puppets near the 20 minute mark and the writers subsequently managed to provide some unique material. A mysterious man, totally wrapped in bandages- it’s Toulon and that isn’t even really a spoiler- shows up and he’s a clear homage to both “The Invisible Man” and “Phantom of the Opera“. It provides a different dynamic, although it also leads to the films biggest flaw (I’ll get back to that). The characters are pretty bland, do idiotic things in order to advance the plot and tend to vanish for long stretches of time, but the acting was good. I think Jeff Celentano (Lance) was wasted, being more charismatic than the male lead (Collin Bernsen), but Bernsen handled himself well enough. Unfortunately, despite having a strong start, “Puppet Master 2” runs out of steam once Toulan (Steve Welles) becomes the primary focus. Welles is INCREDIBLY hammy and this does provide entertainment when he’s interacting with the characters, but it becomes awkward when he’s playing off the puppets. His dialogue was just too theatrical and his mannerisms too over-the-top. He needed someone to banter with and unfortunately, it’s hard to do that with special effects. Every time it cut to him in his private quarters- which is A LOT- I had to resist the urge to fight sleep. The love story is also pretty tedious and feels out of place, especially considering what happens earlier in the movie. Eventually, things stop making sense and it’s hard to build momentum when it would go from an interesting scene to a boring scene. Yet still, I thought there was more enjoyable material to be found within “Puppet Master 2” than not. When it works, it’s reasonably entertaining. Now I can breathe a sigh of relief and pray that subsequent sequels take note.

Nudity: There are a pair of breasts and a male backside, with one explicit sex scene.

Overall: “Puppet Master 2” was a step up from my expectations, so maybe you shouldn’t completely give up on this franchise after part 1. Maybe…