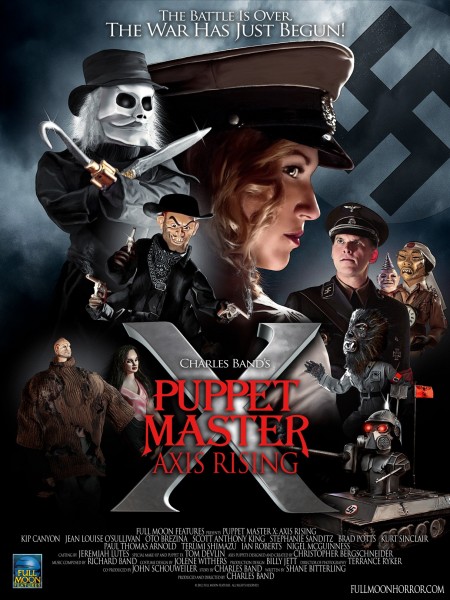 Plot: Danny (now played by Kip Canyon) and Beth (now played by Jean Louise O’Sullivan) must rescue the living puppet known as Tunneler from the Nazi’s- who have created their own demonic puppets.

I have to presume that the majority of those who reviewed “Puppet Master: The Axis of Evil” complained that the movie took itself too seriously, so Charles Band responded with “Puppet Master X: Axis Rising“- which doesn’t take itself seriously enough. This is pure camp, somehow managing to be cheesier than “Puppet Master 4“, but unfortunately the cheese is spoiled and instead of being amused, I groaned a lot. I was hoping Band would learn from his mistakes from the previous film, such as the racism and lack of action, but I guess expecting the director of “Puppet Master: The Legacy” (#Noforgiveness) to do anything right was my mistake. At first, I thought the racist remarks and stereotypes were relatively mild in a Nazisploitation kind of way, but then Kamikaze is introduced and it embodies every single Asian stereotype imaginable. You can also add women to the list of offended, as this is quite sexist as well. Everyone constantly makes remarks about women needing to do women stuff and the female soldier was so over-sexualized that at first I thought she was supposed to be a dominatrix. I’m still kind of convinced she was, since all she seems to do is tease, flirt and seduce without offering any evidence that she’s a real soldier. While there is a little more content that would interest the fans within the first two acts, most of the mayhem takes place during the finale and it’s pretty disappointing. I find it odd that Band has denounced “Puppet Master Vs Demonic Toys“, because he seems to be drawing inspiration from the Scyfy Channel’s ‘style’. “Puppet Master X: Axis Rising” is outrageous, absurd, corny and we are “supposed” to be laughing at it.

I’m sad to say that Band has chosen to jump on a bandwagon I’m not especially fond of. When you want people to laugh at your movie, the easiest thing to do is rely on crappy CGI gore effects. And crappy they were. If you were underwhelmed by the gore in “Puppet Master: Axis of Evil“, then prepare to be pissed off because the violence here is both minimal and cheesy. While the budget doesn’t look any smaller, Band is just not a very good director. I found myself criticizing how various shots were angled and how the score interacted with the visuals. My problem with the narrative is that the ‘resurrection machine’ borrows too much from a similar idea in “Puppet Master 3“, but takes up a lot more screen-time. The villains spend at least half of the movie working on this project that never even comes to fruition! This time should’ve been spent on the new Nazi Puppets, as they were the real selling point. On the protagonists’ end, we get a lot more speeches about how awesome America is- something the Nazi’s even seem to agree with. Once again, way too much screen-time is dedicated to characters delivering inspirational dialogue about why we should enlist (in a war that has been over for 70 years!). STOP FORCE FEEDING ME PROPAGANDA IN A F@CKING PUPPET MASTER MOVIE! The characters are mostly flat and boring, but was it just me or did they often seem inconsistent? Beth suggests they tell someone about the puppets, but Danny says they shouldn’t. Then Danny decides to tell someone, but Beth now is acting like he shouldn’t. Sgt. Stone (Brad Potts) is easily the best character, but even he seems to constantly change his mind about what they should do. One moment he will be ready to fight some Nazi’s with a cripple and a girl, but the next he’s reluctant because the three of them aren’t enough. The attempts at comedy were pretty stupid, but the only time these movies are funny is if they’re funny for the wrong reasons. “Puppet Master X: Axis Rising” is unfunny because it’s intentionally trying to be funny for the wrong reasons, which rarely works. 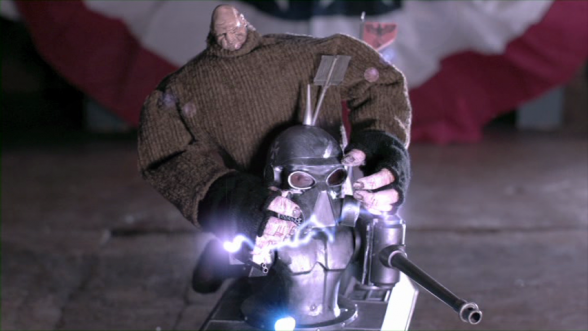 The acting is pretty bad, although I’d still say it’s above “Retro Puppet Master” and “Curse of the Puppet Master“. The opening scene has Ozu (Terumi Shimazu) confronting Moebius (Scott King) and it’s amazing seeing two totally different styles of awful acting- robotic vs hammy- clash so epically…That duel was far more exciting than the final battle with the Puppets, but Moebius comes out on top and Ozu is reduced to being a cameo. Most of the other actors were more conventionally bad, with Oto Brezina (Freuhoffer) arguably being the worst. He mumbles his lines with complete indifference, even when he’s supposed to be scared, sad or aroused (ew). Everyone else acts overly Nazi-ish or American Soldier-ish, emphasizing their stereotypes. I didn’t really care for how the protagonists were both recast, as they were blander and failed to sell me on the emotional parts. Brad Potts was awesome though and provided the few successful comedic moments.

As for the puppets, the special effects are somewhat inferior, although the direction might to be blame for how they look. I will give Band credit in one area though in that he restores the personality of the puppets. Admittedly this leads to me not being able to take them seriously again, but I thought it was strange how “Axis of Evil” had more convincing effects and yet they felt more like props than characters. Blade, Pinhead and Leach Woman get the more prominent roles, while Jester sits around and Tunneler is taken out of action almost immediately. Six Shooter fans should be pleased to know that he returns for the finale, but you can tell the SFX crew struggled with this effect as he’s mostly stationary. One of the films more appealing ideas involved the Nazi Puppets, who would act as a foil to our…soon-to-be-serial killer puppets. Unfortunately, the designs are very hit-and-miss. Kamikaze is revoltingly offensive and Weremacht has a werewolf theme, but doesn’t seem to do much. Blitzkrieg is the love child of Tank and Torch, but probably has the most interesting appearance. Bombshell is the most prominent, but she’s pretty dull. She can best be described as a Nazi themed barbie doll who fires machine gun rounds from her boobies…Okay, that does sound kind of hilarious, but I was underwhelmed. The problem with these new puppets is that they aren’t very memorable and they can usually only fire ammo. This means that the fight scenes are f@cking boring, because you’re either seeing toys mash up against each-other or a Nazi Puppet shooting and missing our puppets. Also, I could’ve sworn half of the Nazi Puppets were defeated off-screen. But in the end, the best thing I can say about “Puppet Master X: Axis Rising” is that I’ve seen a lot worse within this franchise. It’s bad, but I’d place it above “Retro Puppet Master“, “Curse of the Puppet Master” and especially “Puppet Master: The Legacy“, but it’s slightly beneath “Puppet Master 5” and “Puppet Master: Axis of Evil“.

Violence: Rated R, but the blood is CGI and if it wasn’t for the opening scene, they might’ve gotten away with a PG-13 rating.

Nudity: None, but there is some sexuality.

Overall: “Puppet Master X: Axis Rising” is another bad entry for this series and I hope it just ends. No more sequels, no remakes or no cross-overs. Please just let the franchise rest in piece.