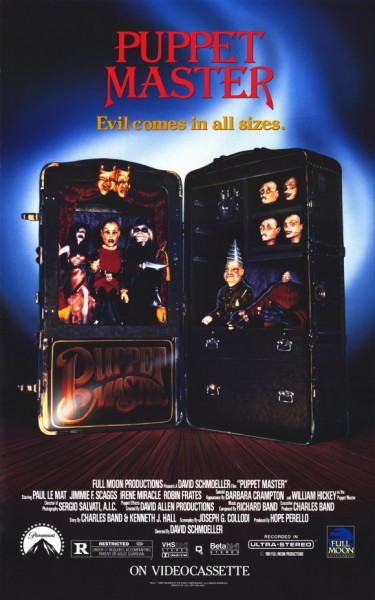 Plot: A handful of psychics are invited to a massive inn by an old colleague, but then learns that he had committed suicide. They use their abilities to investigate, but find themselves being hunted by murderous puppets.

I recall watching the first few entries of the “Puppet Master” franchise as a kid and immediately growing attached. I remember the demonic toys rather fondly, as they were menacing and provided brutal death sequences, but were occasionally sympathetic enough to switch sides. Who didn’t install drills into the heads of theirs toys or attach hook/knife accessories to their hands, while imagining them murdering innocent folks in grotesque ways as a kid? What? You say I was a disturbed child? You mean it’s not normal to stick leaches to the face of my sisters barbie dolls and force my friends to make out with it? Sounds perfectly innocent to me! But I have to admit that I didn’t remain faithful to the franchise, as I was much more interested in watching Jason Voorhees fight psychic chicks. I never did complete see the latter “Puppet Master” sequels and soon, my memories began to fade away until only bits and pieces remained. I can remember some scenes, but I can’t place which movie they came from. But March is franchise month and it was time to invite all the “Puppet Master” movies into my home, where I shall play the proper host before unleashing my own demonic (sex)toys upon them…Unfortunately, nefarious plots rarely go well and I have to say that I was more fond of “Puppet Master” when I remembered very little of it at all. This slasher…does not hold up very well…

It’s a shame too because the puppet designs are creatively creepy- each boasting distinct features and different weapons. Somehow, they even manage to have hints of personalities, which I hope is explored more thoroughly in sequels. The filmmakers could’ve been lazy and just equipped them all with knives, but instead they found inspiration from the deranged parts of their imaginations and “Puppet Master” benefited for it. I guess I can see someone finding the idea of a hook and knife-hand doll to be rather bland, but a drill in place of a forehead? And what the f@ck was up with that female puppet, who kills her victims using…hell leaches? That’s just weird, but awesomely so. You’d think that their size disadvantage would work in favor of their victims, but luckily for these puppets, the characters are too stupid to get away. This means that there are no clean kills, which leads to plenty of cringe inducing moments. The special effects are pretty good too, with the puppets and stop motion usually blending rather seamlessly- for the time, anyway- and the gore was delightfully nasty. It’s just too bad that very little seems to happen in this movie. There are only three really good attacks, with two deaths being lumped together and a fourth being too sudden. The finale was the best part, but it’s what the rest of the movie should have been like. “Puppet Master” moves at a…Hell Leach’s pace…You’re going to have to wait to get to the good stuff and I’m not really sure the wait was worth it. 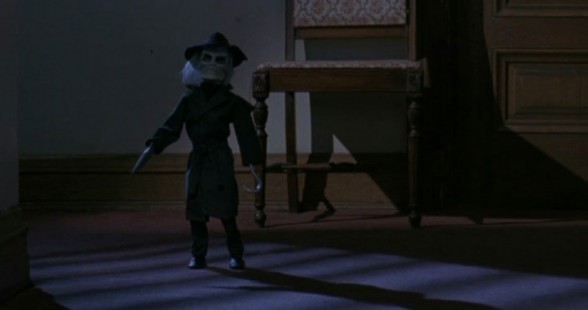 As cool as the puppets are, David Schmoeller- presuming he is to blame- is too much of a hack to utilize their effectiveness. It becomes difficult to take them seriously after the opening scene, where they are shown in a more cutesy and comical light. You’d think that there would be a cool revelation shot, where we are introduced to them for the first time, but nope! It starts with a POV, where we hear goofy noises, and then Blade just wanders in frame without any real fanfare. “Puppet Master” needed more…’oomph’ to it. This is even more apparent when a character wakes up to see three severed heads in his bed. You’d think there would be a smash zoom or an intense musical chord, but nope…Schoeller loves to waste the potential for a good scare. But the tone kept throwing me off the most, as “Puppet Master” is too mean spirited to be funny, but it’s too silly to ever be frightening. Every time it looks like momentum is building, a strange attempt at humor will deflate all tension. Once again, as creepy as the puppets look, their introduction made it impossible for me to be scared of them.

I was a little excited when first reading about the plot, as I only could remember ‘puppets killing people’, but like the idea of psychics being hunted in an isolated location. For all the (many) failures of the filmmakers, they certainly are creative- psychics>generic teens. Unfortunately, the script is not very good…The psychic angle felt wasted, merely an excuse for dream sequences (padding) and I thought it was funny how ‘psychic vs immortal vs dolls’ amounted to…fist fighting…The storyline is also pretty convoluted and disjointed, almost as if the filmmakers recycled plots from cancelled movies and cobbled them together. I’m aware that Toulon’s conflict with the Nazi’s becomes important later on, but what did that have to do with the primary storyline HERE? It would’ve been very easy to omit the entire opening and just state that the antagonist had found the key to immortality. Maybe then they could spend that freed up time explaining what the f@ck happened with the Maid? Her return near the end is baffling, but not as much as her subsequent vanishing from the storyline. Did she die off-screen? Is she still lurking about? Plot hole…The two protagonists are dreadfully boring and the actors aren’t very good. I’ve seen Paul Le Mat deliver excellent performances in other films, but his dialogue delivery is amazingly terrible here. The supporting cast is a lot better, with the eccentric couple being a lot of fun and Irene Miracle stealing the show as Dana. She’s the perfect ‘love to hate, but also just love’ character and I wish she was the real protagonist. Speaking of which, was it just me or did the main characters remain out of the loop for too long? Diana and the horn dogs seemed to be more actively investigating the mystery, while our ‘heroes’ just wander around and flirt until everyone else is dead. That is not very good writing and reinforces my opinion that the supporting characters were more compelling than the main characters. 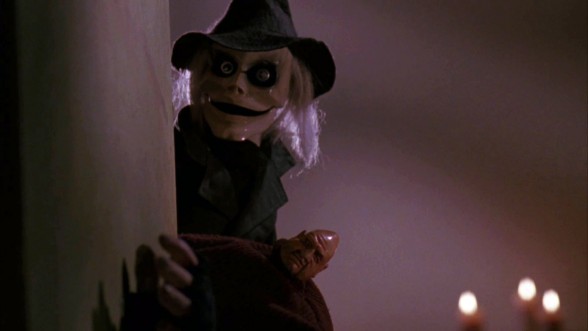 “Puppet Master” has some good stuff and to its credit, you can see the filmmakers trying their hardest to deliver an interesting film. It is filled with ideas, probably too many ideas, but it has no idea how to use said ideas. Psychics being hunted by deranged dolls? Why is this so boring? That sounds like it should be awesome! Maybe the budget was just too small to allow for more attacks, or maybe behind-the-scenes drama is to blame. For all I know, they did have to combine two projects into one- “Spookies” style- in order to complete the production. Or maybe everyone involved had vivid imaginations, but lacked the proper film-making skills. But for whatever reason, “Puppet Master” shoots blanks. It doesn’t catch fire until around the 3rd act, which is why all everyone remembers is the finale…and the finale deserved to be in a better movie, along with the titular puppets. As sequels usually go downhill, I’m REALLY concerned about what to expect from the rest of this franchise. There is obviously a lot of potential, but this was a rocky start.

Nudity: There is quite a bit of nudity and sexuality.

Overall: “Puppet Master” probably should just remain as a nostalgic distant memory, as revisiting the film will only tarnish its legacy within your mind. Not bad, but not good enough.