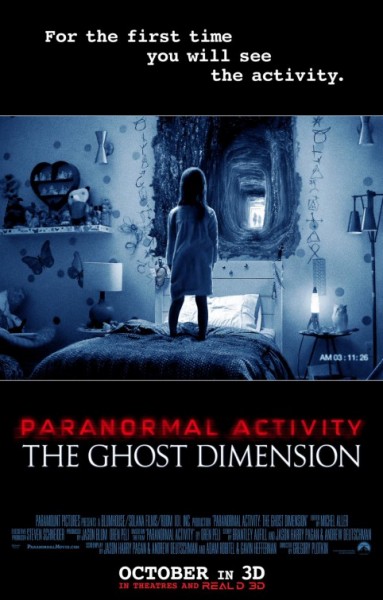 Plot: A new Family is haunted by the demonic entity known as…Toby…who they are able to see in some capacity thanks to an unusual camera designed to capture spirit photography.

“Paranormal Activity: The Ghost Dimension” isn’t just the newest entry in the polarizing “Paranormal Activity” franchise, it has been advertised as the last, which is about as convincing as similar claims surrounding “The Final Destination“, “Friday the 13th Part 4: The Final Chapter” and “Jason Goes to Hell: The Final Friday“. People were always confused by Jason’s resurrection after being legitimately slain, but they underestimate the magical powers of strong box office returns. It brings back the dead. Unfortunately- or perhaps, fortunately- I have a feeling that “Paranormal Activity: The Ghost Dimension” was the final nail in a coffin that had run out of nails two or three nails ago. There was a lot of controversy surrounding its release, as an experimental distribution ended up alienating most of the major theater chains, forcing me to cheat on my beloved Harkins and have a regretful one night stand with AMC (who charges WAY too much!). I also wonder if anyone cares about this franchise at this point, as it’s been almost two years since the last entry and the overexposure of the ‘found footage’ genre has burned out general audiences. The trailers looked abysmal, even though even the previous crappy sequels had put together previews which were more entertaining than the movies themselves and the reception was…negative…very…very…negative…But maybe I’m wrong and this strange distribution strategy will be a success and “Paranormal Activity: The Ghost Dimension” will make enough money to justify a sequel, but the odds are stacked against it. I’m more concerned that the studio is slowly pushing towards the direct-to-DVD market, which will be the ultimate exploitation of the fanbase, as these films are cheap enough as it is. I do not want to feel taken advantage of…

But I also don’t think this should be ‘the last’, so it’s quite the conundrum.

I suppose “Paranormal Activity: The Ghost Dimension” exceeded my (low) expectations and might be preferable for viewers who don’t like the slow pacing of the previous movies. This was pretty fast paced compared to its predecessors, so at least I wasn’t bored. I have to confess that I even jumped at times, although if you hate ‘jump scares’, you will probably bare your fangs at the filmmakers’ attempts to frighten the audience. I was concerned about the CGI, which I don’t feel belongs in found footage- a subgenre that relies so much on subtlety and a feeling of authenticity. Yet while it sometimes reminded me of “Mama” a bit too much, I was never distracted by the use of special effects. Quite frankly, this was possibly a necessity as people just aren’t going to be scared of ‘doors moving on their own’ anymore. Nevertheless, what made the early “Paranormal Activity” flicks so popular was that they took mundane, relatable, everyday occurrences and twisted them into something creepy due to the sinister implications of “What if there was something evil behind that creaking noise?“. “The Ghost Dimension” was smart to try something new, but in the process it undermines the original appeal and now resembles every other ghost flick to come out in the past 5 years. I sometimes found myself thinking: “So this is what “Poltergeist (2015)” would look like if it was found footage“. At least they kept that rumbling noise, which still continues to creep under my skin…You can probably play that over “Grown Ups 2” and then that movie would be horrifying for the right reasons. 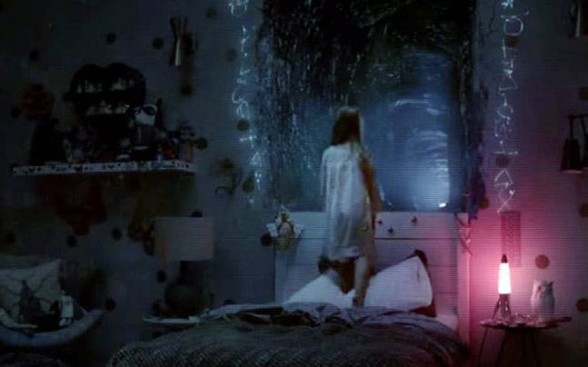 The characters are incredibly generic and for all the bitching that gets directed towards Micah and Katie from the original film, at least they had distinguishable personalities and I can still remember their names. I can’t recall who was who here and if I were to describe any of the characterizations, I’d probably just say “Father, Mother, little kid, Uncle, Blonde Chick (aunt?)“. Does any of the following sound familiar to you? The Father suspects they are being haunted. The wife is skeptical. The daughter is acting creepy. Did I just describe the characters from “Paranormal Activity: The Ghost Dimension?” Or “Paranormal Activity 3“? To the writers credit, at least everyone gets on the same page rather quickly and even reach out for help. But throughout it all, I kept rolling eyes eyes whenever they did something idiotic. They sleep in the daughters room one night, but not the next? They’re told that fear gives the demon power and they believe this statement, but they continue filming even though that will only frighten them even more? The acting is okay (from the adults), but I’ve seen these character dynamics too many times for any member of the cast to leave an impression on me. Children displaying strange behavior no longer has any impact on me, but this franchise seems to adore that trope. I find it be boring and while the young actress is adorable, her acting wasn’t very good. I didn’t feel her performance took away from the movie though, as “The Ghost Dimension” is already a little campy.

Was everything explained? Not really and if anything, I feel even more confused than before. “Paranormal Activity 4” and “Paranormal Activity: The Marked Ones” suggested that the coven was creating an army of demons, which intrigued me. But they built up to that so long, only for them to throw that concept out the window. Now the motive have changed to “Toby wants a human body“…Huh?…Why? Would that make him stronger? Because that sounds like it would only limit his abilities! Maybe he’s the anti-Christ and he will lead the world into darkness if he takes human form, but that wouldn’t be very original (“The Vatican Tapes“- a conventional exorcism flick itself- already used that this year) and I don’t think that was ever stated. What was with the time travel? I suppose it’s more of a dimensional thing, but it’s never really explained why Toby (or the Coven) require it. What happened to the demonic army anyway? Were the previous two sequels erased from the official canon? For a ‘final entry’, there’s no sense of closure. Where is the Coven? Outside of old video tapes, we never see or hear from them. Where is Katie? She’s in many ways a staple of this franchise and it seems odd that she (as an adult) never appears on-screen. I don’t want to end the last movie of a franchise both confused and unsatisfied. That’s the main reason why I ALMOST want them to continue telling this overarching story, but I also suspect that the producers are just jerking us around by this point. 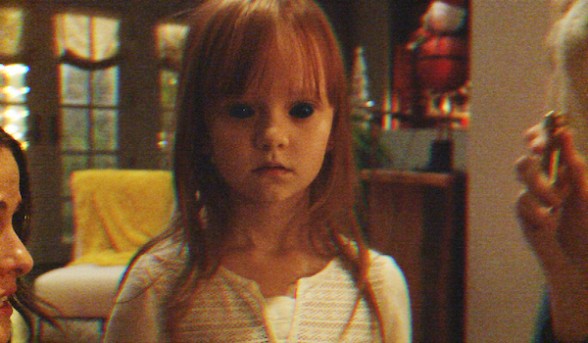 BUT I will admit to finding the majority of the movie to be mildly entertaining. I wasn’t getting impatient or annoyed until the finale began. At first, I was thrilled that they were trying something a little different. Granted, it’s really just an exorcism, but it was nice seeing the heroes go on the offensive for once. I even felt tension, but then…the 3D had to rear its ugly head and ruin everything. I saw this in 2D and hadn’t noticed anything too gimmicky until the 3rd act, where it becomes very distracting. I actually laughed when someone was impaled by a giant 3D arm. Then it attempts to play the nostalgia card and I have to guess that the director and army of writers were huge fans of “Paranormal Activity 3“, as it gets references quite often. “Paranormal Activity: The Marked Ones” pulled a similar idea off more successfully, as that ending did stroke my inner fanboy, even if the movie had its own barrage of flaws. But the ‘final scare’ wasn’t…much of a scare. I felt…nothing. It ends on a very limp note that…guess what? Sets up for a sequel that according to the producers, won’t happen. The silent credits try to be spooky, but they are quickly interrupted by a teaser for “Scouts Guide to the Zombie Apocalypse” before resuming, which made me laugh. There were a few funny moments that I’m not entirely sure were supposed to be played for comedy, such as when Toby plays a game of ‘peekaboo’ with the adult protagonists. Was I supposed to take that seriously? Hopefully not, because I was giggling way too much. The direction, if you ignore the inappropriate 3D and questionable tone, is competent enough. There was a little suspense and the jolts were adequate, but the atmosphere is lacking due to the aforementioned problems and nothing jumps out (no pun intended?) as scary. I found the camera quality to be a little too clean, but that is more of a personal preference and I’m not going to fault anyone for the advances in HD film quality. At least “The Ghost Dimension” was never disorienting.

I think it’s obvious that the filmmakers had no real vision for the franchise and were just making things up on a movie-to-movie basis. I also think it’s obvious that they ran out of ways to scare people by the end of “Paranormal Activity 3“, which was already a little short on thrills. I love how they took an extra year to develop their grand finale and even hired four different writers to bring it to life, but all this amounted to was ‘same shit with CGI, different subtitle’. There aren’t anymore scares, revelations or creativity that wouldn’t have been in a normal sequel. I did not find the conclusion to be particularly interesting or satisfying and part of me wants a better finish for this franchise. The other part of me thinks it’s better off finished. “Paranormal Activity: The Ghost Dimension” wasn’t unwatchable and I’d say it’s A LITTLE better than the fourth, but it’s a study in why this franchise has become so stale. If I feel any anger though, it’s because of the claim that this will explain everything and be the final ‘Paranormal Activity’ sequel. It doesn’t and it probably won’t be.

Violence: Rated R. There is some nastiness during the finale.

Overall: “Paranormal Activity: The Ghost Dimension” is subpar on its own and frustrating as the grand finale of the franchise- presuming that the producers aren’t lying to us.