Plot: A group of mercenaries (lead by Ray Stevenson) are hired to escort a mysterious client (Julian Wadham) to an an old, dilapidated bunker in Eastern Europe- where the Nazi’s held experiments during World War II. Unfortunately for them, those experiments are about to haunt the poor mercs. Get it, “haunt”? As in, they’re ghosts who are about to haunt them….I’ll shut up now.

“Outpost” is my latest conquest in the military-horror subgenre that doesn’t technically exist outside of my own mind. I’ve said it many times before, but the combination of the war and horror genres fascinates me. Unfortunately, the “war” side requires money and resources, which contradicts the studios opinions of the “horror” side- low budget fodder that appeals to the lowest common denominator. Despite my enjoyment of my fantasy-genre, I have to admit that I hadn’t heard of “Outpost” until the sequel was released on netflix. “Outpost 2” had earned some decent praise…at first. You see, netflix reviewers have the tendency to be overly generous upon a movies initial release, so this was back when people thought “Outpost 2” was- or was going to be- good. I hadn’t thought about this though, so immediately added the first one in my queue. I’m glad I did, because “Outpost” turned out to be pretty cool. It’s nothing exceptional, but it shows you can make a successful horror flick that actually uses its low budget in its favor.

So let’s start with the beginning of any film: The Script. Actually, most movies are conceived in the heads of writers who may or may not be under the influence of a drug that may or may not be illegal, but no one likes to think about that. Although I think it should be noted that any plot that can be summed up as “Nazi ghosts” had to have come from the mind of a stoner. A brilliant stoner, but a stoner all the same…The story definitely has its fair share of holes. The ghosts powers are incredibly inconsistent. Sometimes bullets don’t faze them at all, other times the bullets appear to at least stun them. Why do the Nazi-Ghost’s gather together on the outside during the finale? Why do they apparently use fire power early on, but then resort to close-ranged combat? Why do characters keep splitting up during the ending? Why don’t the Nazi-Ghosts attack any of these people while they are separated? Why? Why? Why? WHY? WHY?! WHYYYYY!? And those are just the issues I can’t spoil. Well, I can actually answer those questions. If bullets didn’t have any effect, there would be no reason for anyone to be firing the guns and that would mean less action. Nazi-Ghosts wielding machetes or relying on Jason Voorhees-esque strength is scarier than Nazi-Ghosts wielding outdated guns. They split up so the plot can function and the Nazi-Ghosts don’t attack because that would break up the ‘preparing for the final battle’ montage. “Outpost” isn’t necessarily dumb, but it does find itself falling into some cliched horror potholes. On the flip side, I did like how it tried to do something unique with the Nazi-Ghosts. It’s not just a normal haunting. The combination of science and the paranormal isn’t anything new (“Event Horizon“, which many have compared this too), but I liked how it was used. Furthermore, I also appreciated the ‘why’ everyone was still hanging around even after they begin to realize something might be up. At least USUALLY the writer was able to cover his ass with certain cliches that plague the horror genre.

There isn’t a lot of character development, but I have to give “Outpost” credit for making everyone stand out. The various characters all have their own personalities and the screenwriters somehow meld that into the action and horror. You can tell who these people are just by their reactions to what is going on. When they do take some time to discuss their back-stories, I thought it made sense and added a touch of humanity to these ruthless grunts. Furthermore, characters who are introduced as likable will have moments where they can be jackasses or the ones who are introduced as jackasses will have moments where they are likeable. The acting is pretty good because the filmmakers hired respectable character actors. Everyone looks believable in their role and while Ray Stevenson had yet to master being a leading man, he was cool enough for me to get behind. But my favorite aspect of the cast is how the characters become believably shaken up, but not the point of becoming irritating. I’m going to contrast “Outpost” with “R-Point” (another military-horror feature). That film had its already annoying characters become totally unprofessional when the shit hit the fan. These guys never become incompetent for the sake of driving the plot. They still are able to function as a team and remain reasonably organized. But they also become more frightened as the film progresses. I LOVE THAT. One of my favorite moments is when a Nazi-Ghost suddenly appears behind a character, who immediately senses their presence and attempts a counterattack. It doesn’t save them, but it made the villains more threatening when they can overpower characters who are established- and consistent- badasses.

I really wish I can call “Outpost” scary, but I can’t. Honestly, throughout my viewing, the word ‘entertaining’ kept dominating my opinions but that doesn’t make a lot of sense. “Outpost” is pretty slow paced- focusing more on build up than action- and I suspect my Father may have fallen asleep during the first half. So I’m not sure if ‘entertaining’ is a fair statement. The set is pretty solid, but the design is fairly standard for a horror flick. The bunker looks like it was made to be in a movie where nazi-ghosts attack people, but the camera never really seems to linger on the location, so that wasn’t my anchor. There would be the occasional exceptional bout of direction, like when they stumble on a pile a bodies. If that won’t make you shiver, then maybe the ‘light show’ scene will. Or the revelation that someone vanished without a trace that immediately follows. These are creepy parts within the movie, but I can’t say the movie itself was creepy. I actually began to realize that the best aspect of “Outpost” was something I initially found obnoxious: The Fake Scares. 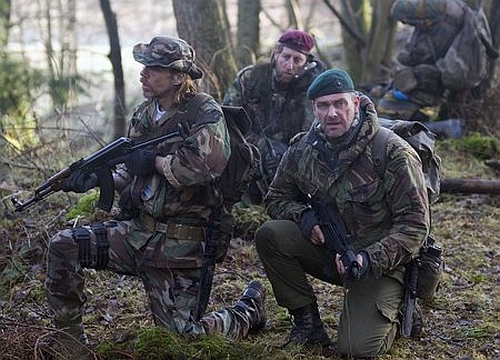 Every time I thought someone was about to bite the dust, nothing would happen. I eventually started joking around with my Dad about this and we began to compete as to who would become the first victim. Just as we began to get smug and presume we were correct, they wouldn’t die. Eventually I became annoyed and said: “Stupid movie! STOP PROVING ME WRONG!” and then it struck me. “Outpost” had successfully faked me out so many times that I now wasn’t sure who would die first/next. That heightened the suspense and would make me bite my nails in anticipation whenever it seemed like something would happen. Even better, I never was right about ANYTHING. Even during the ending, I was constantly having the rug pulled out from under my feet as to where it would go. To me, that’s where “Outpost” shined the most. It made a fool out of me, and that made the experience much more intense.

Sadly, the ending kind of sucked. Every complaint I’ve made about the film really started to crystallize near the end. It becomes more action packed, but the action isn’t very well edited. While I liked how the characters had a formation, everything was too jittery and one death was flat out incomprehensible. I had no freaking clue as to what was happening. “Outpost” begins to rely more on special effects, which aren’t very good and how they’re used is just silly. Just wait until you see a character try to do…science…on the Nazi-Ghosts. It’s pretty funny. I also felt like the director had maybe shot everything in sequence, but had fallen behind schedule and just didn’t have the time to create a worthy finale. I don’t know if that’s true, but the finale was very rushed. Some of the characters fates are unsatisfying and the story just sort of ends abruptly. I may have been somewhat snarky as I’ve typed this review, but every smartass comment or criticism I’ve made/had wasn’t a big deal throughout the bulk of the feature. It just became glaring during the third act. Shame, as I really did like the rest of “Outpost“.

Allegedly, we were supposed to see more of the Nazi-Ghosts, but the lack of money meant substandard make-up. So they wisely kept the villains in the shadows, which is always a better idea. Then when we do get a good, hard look at these monsters, the make-up can be a little more frightening. I suspect that if “Outpost” had more money to work with, it wouldn’t have been as effective. We probably would’ve gotten more elaborate action scenes, which could’ve undermined the build-up. We would’ve gotten more on-screen zombie-ghosts, which could’ve undermined the suspense and my expectations would’ve been higher. Apparently this is where the sequel went wrong, although I can’t confirm this until I see that movie. I personally liked how “Outpost” cleverly side stepped its budget limitations, by relying more on our imagination. I just wish it had a better final act. Maybe if that was improved, it could’ve achieved greatness? Or at least ‘really goodness’…lol…

Overall: “Outpost” is pretty good. Nothing great, but good.