Plot: Laura (Belén Rueda) decides to move her family into an old building which used to be the Orphanage she grew up in, but discovers that the home is haunted.

“The Orphanage” might’ve been directed by J.A Bayono, but I remember when this was released, it was Guillermo del Toro’s name which was exploited by the marketing department. He was the producer of the flick, although I don’t know how much creative input he had on the project. For all I know, he just snapped his fingers- catching the attention of the money men- and pointed towards the script, causing them to throw money and bitches at “The Orphanage”. Big daddy del Toro be keeping his pimp hand strong! As a director, Guillermo del Toro is one of the most imaginative and energetic filmmakers in the business. As a producer, his output has been rather uneven. He’s done a slew of Spanish films I’ve never heard and If I’m unfamiliar with them, I like to pretend they don’t exist. “Don’t be Afraid of the Dark” and “Mama” divided the critics, while I enjoyed the former and despised the latter. “Julia’s Eyes” was pretty good, if a bit unfocused. “The Orphanage” has earned the most acclaim, but does it get my worthless stamp of approval? Well, yes, but I have to reveal that in a more dramatic way. “The Orphanage” might be telling a very familiar story, but its haunting atmosphere and emotionally moving drama elevated it above the majority of modern day ghost flicks. There, I think that was dramatic enough.

You might be wondering why my opening paragraph focused more on the works of Guillermo del Toro instead of the actual director, J.A Bayona…Who is J.A Bayona again? I looked at his filmography and prior to “The Orphanage”, he didn’t do much and subsequent to “The Orphanage”, he didn’t do much. I added this to my Netflix account BECAUSE of Del Toro’s involvement. It is a shame though that Bayona hasn’t had much of a career, as “The Orphanage” shows that the man had skill. He had excellent locations to work with, as they’re both moody and pretty, but he utilizes them effectively too. There was obviously a lot of time put into framing various shots and making sure the lighting was just perfect. But even though this is a nicely made chiller, Bayona deserves all the loving in the world for how he balances that with drama. I was often brought to the verge of tears before reminding myself that I was a man and I wasn’t supposed to cry. But…but…IT WAS JUST SO BEAUTIFUL!!!! WAAAAH! 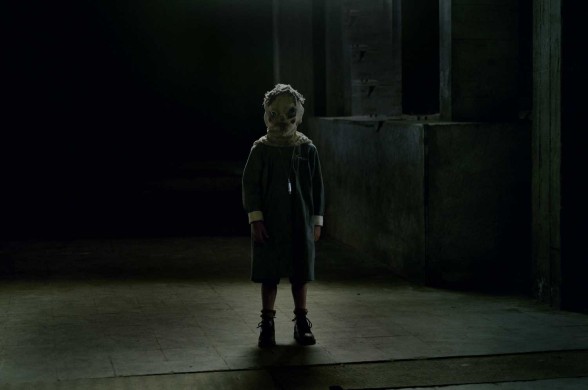 If there is one criticism anyone- and by anyone, I mean everyone- has directed at “The Orphanage” it’s that the plot is pretty unoriginal. It’s funny how reviewers complained about this back in 2007, but writers are STILL abusing this same story as of 2013. You have all the familiar elements: Family moves into a haunted house, the son has imaginary friends who will likely turn out to be ghosts, the Mother starts seeing evidence of the supernatural but the Father denies it, an expert has to be called in but doesn’t really do anything and there is even a red herring that undermines the paranormal angle. Am I reviewing “The Orphanage” or “Dark Skies (2013)”? Luckily, while the “The Orphanage” isn’t very unique in terms of its set-up, the plot does ultimately explore some different territory. Within the first 30 minutes, there is a twist I wasn’t expecting and some of the big reveals are definitely shocking. The reason why I was vague when describing the plot is part of my enjoyment came from me not knowing what was coming. Based on the first act, I was sure I was in for the same ole shit (albeit with good execution), only to find myself thrown off balance for the remainder of the film. Granted, it’s still a bit too familiar, but I felt there was much more effort and ambition placed within the screen-play, whereas the majority of ghost thrillers often feel like they’re re-using each-others scripts.

One of the reasons I usually loathe ‘family-themed’ horror is I can’t stand the dynamic between parent and child. There will generally be one of two scenarios. The first is that the family is so diabetes-inducing happy and perfect in every way, in order to make the entrance of the supernatural that much more devastating for them. The second is that the children constantly bitch at the parents, spending too much time emphasizing how dysfunctional they are, so the theme will be how they must unite to stop the malevolent opponent. “The Orphanage” is unique in that it manages to balance out the family drama. It’s obvious that Laura and Simon (Roger Príncep) love each-other and you can see that within their actions, but that doesn’t mean every moment is sweet and bubbly. They’re often at each-others throats as well. This added A LOT of realism to the proceedings, which I felt boosted the tragedy of the situation that much more. The acting is SOOOOOO good by everyone, but it’s really our heroine who drives the film. She goes through so many raw emotions, but the actress restrains herself so that she conveys everything realistically. She is a fully realized character, which once again, helps fuel the drama. I’m not exaggerating when I say that “The Orphanage” was so moving that I was almost brought to tears. The conclusion really got to me…although the final scene was a bit too vague for its own good. But what proceeded that was brilliant…

If critics criticized the familiar plot, they’ve almost unanimously banned together in praising the scare tactics. “The Orphanage” doesn’t rely on boo scares or jump scares, although there are a few jumpy moments. It instead focuses on old school suspense generated by the situations, spooky atmosphere formed from the lighting and locations and a creepy ghost whom I suspect inspired the villain from “Trick ‘R Treat”. Seriously, bag head alone gets under my skin. I can see some viewers watching “The Orphanage” and being underwhelmed by it, as it doesn’t contain many terrifying moments, but the continuous feeling of unease managed to get under my skin. I also like how the director could twist something ‘normal’, like a kid laughing, into something dreadful. I’d say “The Orphanage” is very similar to del Toro’s “The Devil’s Backbone” in its scare tactics- along with its detail to character. Neither film tries too hard to scare its audience, instead focusing more on building character and story. The more it focuses on the characters, the more unsettling these movies seem to become. But what’s even more del Toro is the fantasy, fairy tail-like elements added to the story- especially when it came to the music. Unlike “Mama”, I never felt like multiple tones (one horror, one fantasy) were fighting each-other for dominance over the film. If anything, it added some thematic material, which helped tie in to the character drama.

I didn’t really want to see “The Orphanage” because I’ve become so burned out on these kinds of ghost films. But oddly, I think I liked “The Orphanage” that much more BECAUSE I was burned out on them. It was nice feeling like the writer was actually writing something new, even if he was using various conventions. It was nice seeing characters whom I could attach myself too, whom I could care for. It was nice seeing a horror movie which didn’t rely on shock values or cheap thrills. It was nice seeing it focus more on unsettling us by making us concerned for its cast, which heightened the overall experience. The fairy tail parallels added substance to the movie, making it that much more special. I don’t want your expectations to be too high, as its brand of terror might be a bit too subtle for certain tastes, but I thought “The Orphanage” was much more than just another ghost flick. In essence, it’s everything that other modern day ghost flicks should be, but aren’t.

Violence: Rated R. It has one really graphic moment.

Overall: I really liked “The Orphanage” and believe it’s certainly worth watching, especially if you like these kinds of ghost flicks. But even if you don’t, you should give this a look- depending on why you dislike them.