Plot: Gabe Law (Jet Li) is a highly skilled martial artist, a respected cop and a beloved husband, but he doesn’t understand why he seems to be getting stronger and faster with age. It turns out that there are many different dimensions with alternate versions of Gabe Law, such as Gabriel Law (Jet Li), who wishes to kill all of the different ‘Law’s’ because they (he) gets stronger every time he does so. But Gabe is now the last target and if he is killed, either Gabriel will become ‘the one’ or the Universe will be destroyed.

When “The Matrix” was released in 1999, it was a game changer within the realm of cinema. When I saw it, I was probably around 14 years old and I’m pretty sure I discovered sex with that movie…and I’m not just referring to those awkward times when I would find myself alone with a copy of the VHS…I refer to its effect on my life. I would watch it over and over again and even as a teenager, I immediately recognized the impact it had on the way movies would use special effects to drive the action. It’s bizarre how a few years later, my views would sour and I would become so sick of “The Matrix” that I haven’t given it a look in about 10 years and I have no desire to pick it up again. “The Matrix” would spawn disappointing sequels, crappy video games, an unlimited amount of out-of-place parodies and plenty of imitations. “The One” was one of these imitations, but thankfully it was produced when I would’ve thought that was awesome. A couple years later, when “The Matrix” had invaded my beloved Godzilla franchise, I didn’t think those influences were quite so awesome. “The One” seems to be comprised of a handful of awesome sequences which arguably surpassed “The Matrix” when it came to sheer coolness, but it doesn’t have much else going for it. Sad, as it had an interesting premise, a hair wielding Jason Statham and TWO Jet Li’s kicking ass. It’s still fun, but it could’ve been so much more than a wannabe Matrix.

When you actually think about it, there weren’t many films which blatantly exploited the success of “The Matrix” like “The One” did. “X-Men”, “Night Watch”, “Charlie’s Angels” and “Daredevil” were clearly influenced by “The Matrix” in parts, but I’d say each of them (good or bad) managed to acquire their own identity. If you don’t call them rip-offs, I won’t call “The Matrix” a rip-off of “Dark City“. “The One” is…The One…true clone of “The Matrix”. Both have similar visual styles, similar gimmicks, similar action scenes and they keep even referring to being ‘the one’. It’s as if “The One” is continuously reminding us: “Yeah, we’re just like the Matrix bitches! Oh, and “Highlander” too…But that’s not relevant right now so who cares”. I have always felt it’s never a good idea to remind us of other, better, films. But “The One” kind of uses this to its advantage, as it does occasionally top its predecessor with some of its action sequences. Don’t get me wrong, “The Matrix” is a vastly superior film. Hell, “The Matrix Reloaded” is probably better as a whole. But if we just took various individual scenes, I felt “The One” in its 87 minute running time had far cooler moments than anything the Wachowski’s gave us during their entire disappointing career. Let me end this paragraph by reminding you that the Wachowski’s were masters of ‘cool’…well, when they weren’t making “Speed Racer“…so it says a lot when one of their imitations takes that coolness even farther than they did. 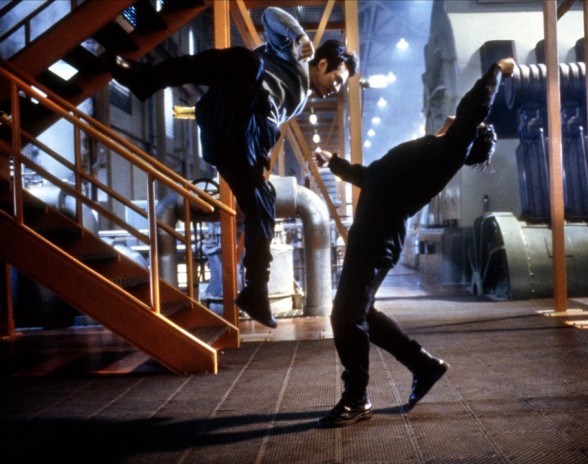 “The One” contains so many moments of ‘Holy shit that is awesome’ that it’s easy to overlook its unoriginality and its lack of story and its conventionally bad moments. The good news is that “The One” moves so fast that I don’t see how anyone can call it boring. The bad news is that NOTHING is developed at a natural pace. In terms of plot, most of the information is dumped on the audience in a highly forced and awkward manner. We’re expected to care about the characters and their relationships, but the only amount of characterization we get is ‘hints’ of a troubled past. While I felt this did work with Roedecker (Delroy Lindo), whose obsession with procedure stems from an implied bad decision, he isn’t that prominent within the movie. Gabriel is bad and Gabe is good- that is the extent of BOTH Jet Li’s characters. Funsch (Jason Statham) is a trigger happy jerk with a troubled past who has to become Gabe’s ally, but he gets old because his purpose is primarily to be out-shown by the protagonist. None of the relationships are developed, but “The One” really wants us to care about them…sometimes. Gabe’s wife (Carla Gugino) is a plot device, his cop buddies have about two seconds of screen-time with him, he doesn’t spend much time bonding with Funsch. Funsch bickers with Roedecker and while there’s supposed to be something deeper there, it’s just not fleshed out enough. Nor is Roedecker’s history with Gabriel, which could’ve been interesting, but somehow falls flat even though the supporting cast did a good job in their limited roles. “The Matrix” contained the full package, balancing action with story and character development. “The One” forsakes story and character development- even though it had plenty of potential in both regards- for a superfluous scene where Jet Li beats cops up with their motorcycles…which was AWESOME.

I was surprised at how nicely “The One” held up when it came to the CGI. Most filmmakers can only pray that any Computer Generated Imagery found within their films will impress the audience ‘now’, so they won’t have to worry about the future- where the fans will hate it. “The Matrix Reloaded” provided breathtaking effects for its day, but it’s hard to watch ‘Flying Neo’ without cringing at how phony it looks now. I still can’t bring myself to watch “Jumanji”, a childhood favorite which has since been consumed by its awful special effects. Yet while “The One” does have the occasional awkward moment (Jet Li running), the CGI blends in nicely with the actors. When it’s used, it’s used AWESOMELY. I love the scene when Jet Li dismantles an entire police squad while “Let the Bodies Hit the Floor” plays in the background. Or when Jet Li uses a gun to block a bullet. Or when Jet Li crushes some cops with a pair of motorcycles. It’s…so…COOL! Nothing in “The Matrix” compares to the epicness of Jet Li kicking down a street light…It’s far more awesome than it sounds.

I think part of the reason “The One” continues to impress in regards to its action sequences is that it doesn’t rely on just one form of visual. Jet Li’s “Sorcerer and the White Snake” was almost purely CG-fu and it got old for that. But “The One” also gives us some traditional kung fu sequences, especially when it came to the final fight. The choreography was incredibly creative as it takes two vastly different fighting styles and uses them to tell a story which is far more sophisticated than the actual story. Bad Li uses a more direct and power based style while Good Li uses a more circular and adaptive style and both styles look good while clashing. There’s also a lot of fun with the sets, which work both for and against the dueling warriors. James Wong uses a lot of wire-work, but uses it in the right places so it adds to the coolness while usually not drawing too much attention to the fact that Jet Li is obviously being hoisted by a wire. I also loved how fast motion and slow motion is used. The director strikes a nice balance between the two and utilizes them in the right moments, making the action scenes more memorable without going too far. Part of the reason why I like “The One” more than not is even if it fails in every other aspect outside of the action, at least 80% of the movie seems to be action.

“The One” does occasionally dabble in bad movie territory too. How come Jet Li can dodge bullets, but he seems to have difficulty dodging punches from normal people? It’s funny how the ENTIRE STORY would’ve collapsed if it didn’t rely so much on ridiculous contrivances. Ah, Pepsi product placement, how blatant you are…did they seriously do a jumping cat scare? If you know they’re is an evil doppelganger of you, WHY DO YOU DRESS LIKE HIM?! This also has to be one of the WORST performances from Jet Li I have ever seen, although the language barrier presumably is the issue. There’s a lot about “The One” which is easy to make fun of and I can certainly see why most people- including myself- don’t consider it to be a good movie. It’s shallow, it’s stupid, it’s…so freaking awesome. I really do get a kick out of the action sequences, so I can overlook everything else. It’s more awesome in parts than as a whole, but since “The One” seems to be mostly comprised of awesome parts, I can dig it.

Unfortunately, the director would ruin his career with the infamous “Dragonball Evolution”…That was not very awesome…

Overall: “The One” is an entertaining rip-off of “The Matrix”, but it is pretty dumb. Just know what you’re getting into.