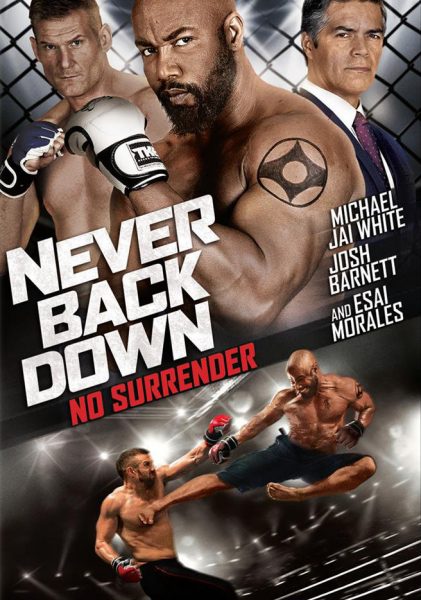 Plot: Case Walker (Michael Jai White), the enigmatic martial arts teacher from “Never Back Down” (previously played by Djimon Hounsou) and its sequel, reluctantly decides to re-enter the world of MMA to help train his old friend Brody James (Josh Barnett) for a big Championship fight. Also known as “Never Back Down 3“.

Even though “Never Back Down” was very mediocre, I can kind of see why it would develop into a trilogy, as Case Walker is an intriguing character. Whether he’s being portrayed by Djimon Hounsou or Michael Jai White, he evokes this mysteriousness and sense of cool that makes you want more of him, but instead the focus always seems to be on his bland, douchebag students. While “Never Back Down 2” utilized him a lot more, he was still just a supporting character. “Never Back Down: No Surrender” finally puts the spotlight on Case Walker, giving us the protagonist we’ve always deserved in a movie that doesn’t really deserve him as the protagonist. There is some good stuff here and in a few ways, this third entry did connect with me more on an emotional level than its predecessors did, yet I also think that it’s the sloppiest of the trilogy. The writing is unfocused, the direction is flat and the acting is uneven. Granted, it’s also the only one to be more interested in martial arts than cliched love triangles, so…maybe the trade was worth it?

“Never Back Down: No Surrender” is very awkwardly paced because the narrative is leisurely wandering between its various subplots, seemingly without any sense of direction. Case is supposed to be helping train Brody for his big Championship match, but they don’t share the screen enough for that to be the anchor of the story. They do occasionally reference some training sessions, but presumably they occur off-screen and both men seemingly have their own story-threads until circumstances lead to them clashing. Brody is indulging in an unhealthy, self destructive lifestyle, while Case has a romance with Myca Cruz (Gillian White) and teaches two amateurs how to fight. One of the amateurs has a very brief, tacked on subplot with Jeeja Yanin, who I assume was just visiting the set and was talked into working for a day. While unfocused, each subplot does have some merit. Jeeja Yanin’s character might be pointless, but she just provide the slickest fight scene in the entire movie. Case is an unorthodox teacher and I’ve always liked when the trilogy focused on his philosophies and strange methods, so I can’t completely poo on the segments involving him and his new students. But a stronger script would’ve put Brody in their place, as he is relevant and they are not. The love story is a mixed bag due to some really awkward interactions. Myca asks Chase on a date, but brings her daughter without even letting him know she had one. That seems really odd and inappropriate, but it gets worse… She inquires about his time in prison and when Case balks, she starts saying things like “I need to know about the men I bring into my daughters life” and her dialogue makes her seem REALLY unhinged. This is a first date! Don’t come off so strongly about things like this! But I also have to admit that White and…White? Wait, they’re actually married in real life? No wonder they have chemistry! They play off of each-other very well. Chase is also adorable when he’s shy, so I did have an easy time swallowing their romance despite the obvious writing obstacles. Brody James is not an endearing character, primarily because his personality changes from scene to scene. I think a large part of the problem is that Josh Barnett is a pretty bad actor, so struggled with naturally conveying the various changes Brody goes through. But once again, Case and Brody needed more screen-time together, as I often found myself wondering why these guys were ever friends. Luckily, Michael Jai White is a good enough actor to make their dynamic tolerable, but I found myself not really caring about the conclusion to Brody’s character arc. The stakes and consequences were too minimal to bring out an emotional reaction from me. 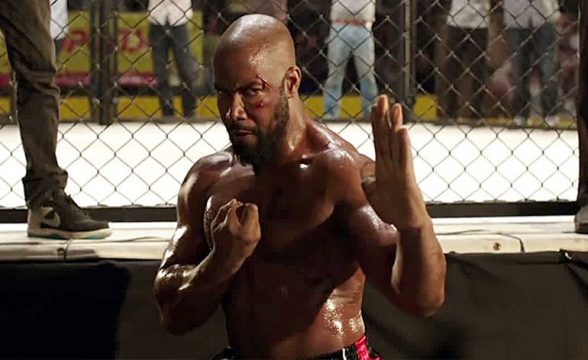 Michael Jai White returns to the directors’ seat after previously helming “Never Back Down 2“, but I personally believe this ‘franchise’ would benefit from a new director. “Never Back Down: No Surrender” lacks style, energy and is tonally inconsistent and I believe a combination of low production values and White’s inexperience are responsible. At least his directing abilities are more middling than terrible, but imagine how much more exciting this same story would be if Isaac Florentine, John Hyams or even ‘master of mediocrity’ Roel Reiné were in charge? I like to believe they’d enhance the visuals, trim down the filler and add a dash of excitement to the narrative. I guess I should be grateful that nearly every shot is adequately framed and lit. The editing isn’t choppy or disorienting either, but I feel like I’m grasping for positives just because of my respect for White…and because I’ve seen too many awful Steven Seagal movies to take those things for granted…The final fight between Case and Nathan Jones’ villain isn’t without interest, as we actually get to see Case on the defensive for the first time. But White needed to push the camera in there, so we can see Case’s reactions to his ass getting kicked. More close-ups therewould’ve helped the audience- or at least myself- make an emotional connection to their conflict. The choreography during the finale is mediocre and the editing did little to add any excitement, although at least I could always tell what was going on. There are a handful of other fight scenes and they’re alright, primarily because White is working with real MMA fighters who have their own skill sets, although they usually don’t stand a chance against Case. I hated the score, which primarily consists of a single rap number that always seems to be blaring whenever Case is participating in the exciting action of…walking. It’s a lame attempt to add intensity to an otherwise mundane, fillery scene. While not a comedy, “Never Back Down: No Surrender” has a humorous side and the jokes can be very juvenile, which awkwardly contrasts with the more serious tone…Yet I almost always laughed and even if I felt guilty for doing so, I’m glad they sacrificed a consistent tone for the sake of comedy- which I must remind you is subjective and you might think it’s distracting, silly or even offensive. I do like some of the content, such as the use of kata and training, but “Never Back Down: No Surrender” is a lot like…well, “Never Back Down 2“…and “Never Back Down (1)“…I’m not going to remember it, because neither the good or bad really stand out.

Nudity: There is some nudity and sex, some of it being explicit.

Overall: “Never Back Down: No Surrender” isn’t really bad, but it’s not really good either.