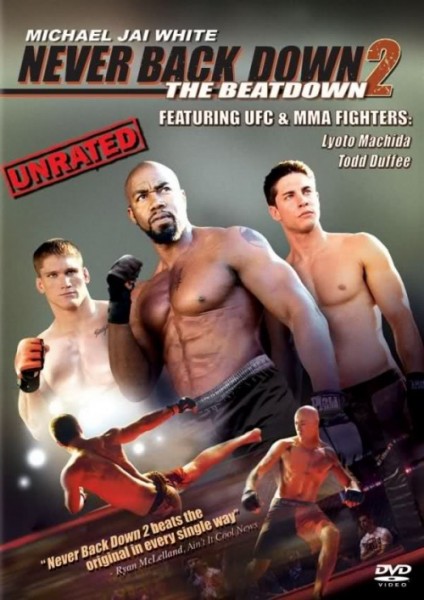 Plot: Mike (Dan Geyer) is a talented wrestler whose problems at home have left him bitter and angry. When he hears that martial arts enthusiast, Max (Evan Peters; from the previous film), is holding an amateur mixed martial arts tournament, he decides to enter. But he’s not ready, so has to train under the legendary Chase (also from the last one, but now played by Michael Jai White) in order to improve himself. But he’s not alone. He will have to compete with fellow trainees, which includes a boxer and a troubled loner.

“Never Back Down” was groundbreaking in its ambitions to be insanely forgettable and mediocre. I remember lots of uninspired teen angst, which overshadowed the (admittedly) decent fight scenes. Naturally, I had no desire to see that mediocrity expand into a sequel. I would’ve have even bothered had I not noticed Michael Jai White on the poster. White was a failed ‘next big thing’ from the 90’s, being attached to high profile bombs like “Spawn” and “Universal Soldier: The Return“. Luckily, White hasn’t been forgotten and every once in awhile will appear in a cult favorite (“Black Dynamite“) or a Hollywood Blockbuster (“The Dark Knight“). Yet what caught my attention the most are his direct-to-DVD martial arts features. I’ve been following his career since the shockingly entertaining “Undisputed 2“, itself a sequel to a generically forgettable movie. So maybe he could bring that same magic to “Never Back Down 2“. He’s also the director, which is intriguing and frightening at once. But how was it? Did it wallow in its genericness like its predecessor? Did it emerge victorious from the muck? Or is it unwatchable? Because personally, I’d rather an awful movie that stays with me than a subpar movie that doesn’t at this time in my life.

“Never Back Down 2” is a hard film to summarize because calling it a success would be too generous, while damning it as a failure would be too harsh. Even though I like giving the first one a lot of crap, it does have a loyal following. Enjoying that kind of movie comes down to whether or not you connect with the characters. In that case, I didn’t. But the cast of “Never Back Down 2” was much more interesting, so I apologize if I compare the two more often than I should. Many reviews claim that this is a rehash or even a remake of the original, but I disagree. “Never Back Down” was about a douchebag being bullied by an even bigger douchebag while he slowly- but surely- seduces the guys girlfriend. He also sometimes trains in martial arts. “Never Back Down 2” is about four douchebags learning about themselves and trying to overcome personal obstacles, while they learn martial arts. There isn’t even a real villain until latter in the movie and I was surprised at that revelation. The characters whom you think are going to become the antagonists never actually go that route. One thing that sets this apart from its predecessor is that this one tweaks the formula enough that it ALMOST starts to seem original. Here, assholes have moments where they are endearing while nice guys can become cruel. A more direct example comes in the form of Mike’s Father. I’ve seen plenty of movies where the Dad divorces his Mom for another woman. That is a trope at best, a cliche at worst. But how many have you seen where the Dad leaves his Mom for another dude? It doesn’t quite make the film ‘unique’, but at least the writer is trying his best to do something different with the overused conventions. 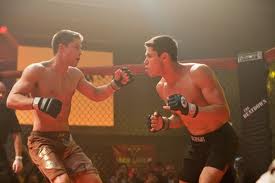 As for the love story, it’s just as shallow as they all are, but at least the film doesn’t focus on it all that much. Every once in awhile Mike will have a conversation with Eve (Jillian Murray), even when she’s dating Zack (Alex Meraz), which might be a nod to the original. But then Eve and Zack break up for separate reasons, so that melodrama is thankfully diminished. There is more emphasis on the training regiments, which are awesome. While I wished they cut out that teeny bop music that had the tendency to play during these sequences, I liked all of the philosophy and techniques shown. I’ve always found MMA to be boring on-screen. It’s supposed to be more practical (although I think it’s just as rigid as most martial art styles), but it’s barely any flashier than boxing. Maybe MMA would work effectively under a better choreographer, but White takes some of its concepts and adds them to pre-existing styles. One character uses capoeira and boxing (interesting combo), another uses jiujitsu (grappling), one relies on brute strength and the protagonist tends to use a little of everything. Chase says he never trains anyone the same way twice and it shows. The fights look diverse and White’s relatively simple direction does a good job at not getting in their way. It also appears that these are real martial artists, not actors pretending to be martial artists. That always helps.

This isn’t an action packed movie though and I suppose this leads nicely into the problems. It balances martial arts and drama fairly well, but it never leaves a major impression as either. I was never moved to tears, even though the characters themselves are often sad. People will start yelling at each other for no reason, other than to provide dramatic tension. It’s just too forced. I never found anything to be inspiring or rousing, whereas movies like “Rocky” and “The Karate Kid” (dramas with some form of martial art) got me shadow punching in excitement. There’s a lot of unnecessary material and the tone is all over the place. The soundtrack- one of the weakest elements of the entire movie- feels like its catering to a younger crowd. But the gritty beatdowns don’t jive well with it. Then there are some sex scenes which sort of come across as pornographic, but aren’t. “Never Back Down 2” seems unsure who its audience really is. Are we getting a coming-of-age story? A sleazy ‘getting corrupted by fame’ tale? An MMA movie? If it’s all of the above, then there’s some of everything, but not a lot of anything. This often spells ‘boring’ for me. 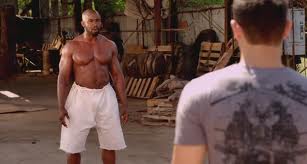 “Never Back Down” felt like it was just going through the motions. “Never Back Down 2” showcases a lot more effort and has an edge to it. I enjoyed the fights, the training and even some of the interactions. The acting is pretty good, although some of the fighters are a little too pretty looking and White occasionally is a little too over-the-top. Yet it’s missing a few things. The writer needed a way to make the drama flow a little more smoothly. Whenever he isn’t sure where to take the story, he’ll randomly have a character be a dick and start a temporary feud. That shit got old. Michael Jai White- as the director- needed to decide who this movie is for. Action fans won’t appreciate all of this teen angst, nor the bubblegum soundtrack. Those who want the teen angst/bubblegum soundtrack will be put off by the brutal action and sleazy sex. “Never Back Down” at least knew exactly what it wanted to be, even if it’s not my cup of tea. “Never Back Down 2” is more my kind of movie, but it contains too much downtime to be considered ‘good’.

Violence: Rated R, mainly due to profanity. But it can be violent at times.

Nudity: You see some in a few unnecessary sex scenes.

Overall: Watch “Never Back Down 2” if you liked the first film or are partial to Michael Jai White. Don’t expect greatness, but it’s not bad.