Written by Who Cares) 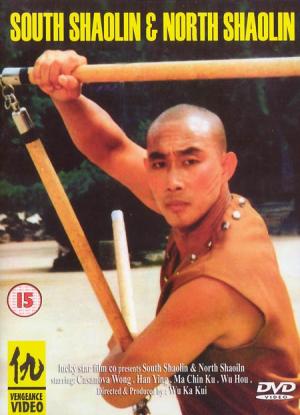 Plot: Mao (Casanova Wong) rescues a prince, which leads to a war between the Shaolin monks and…bad guys. Also known as “North and South Shaolin” and “Buksorim namtaegwon“.

My quest to complete “A Fistful of Kung Fu“, a box set of five different movies, continues! My adventure began with “General Stone” and it was quite the orgasmic experience. Where else would you see a hero conceived by the lovemaking between a woman and a statue? Above average choreography, bizarre ideas and hilarious incompetence formed an ungodly alliance to create “General Stone” and I’m pretty sure their goal was to entertain me…Mission Accomplished…That level of amazingness is going to be difficult to top, so “South Shaolin Vs North Shaolin” better bring something more to the table than just awful dubbing and a poor DVD transfer…because so far, I’ve gotten plenty of that in abundance. Nevertheless, at least this DVD doesn’t have the framing correct itself in the middle of a shot, so that must’ve been a flaw only belonging to its predecessor. Otherwise though, expect the same level of grainy footage and amusingly terrible voice acting. Unfortunately, the rest of this flick is bad for more conventional reasons…conventional reasons which did not bring me much laughter. “South Shaolin Vs North Shaolin” might offer fire breathing ninja and drag queen ghost people, but it’s just not very fun. I spent the majority of my viewing experience trying to figure out what in the hell was going on!

What makes “South Shaolin Vs North Shaolin” so frustrating is that it has all the elements to be an enjoyable kung fu flick. At first, the ‘badness’ was bringing a smile to my face. Who can watch those ninja crawling, rolling (!!), gliding (!!!) and apparently breathing fire (!!!!!!!!!!!!!!!!!!!!!!!!!!!!!!!!!!!!!) with a straight face? That’s just awesome! Or what about that awkward moment where you see dozens of monks enter a formation, which is captured with a nicely framed wide shot. At first you’re thinking “Oh, that’s cool” and then you realize that they had just formed a giant swastika…Am I the only one who feels like there should be a movie where Shaolin Monks battle the Nazi army for ownership of that symbol? “South Shaolin Vs North Shaolin” also has a “what the f@ck!” moment when Casanova Wong (cool name; why is someone with that name playing a monk?) takes on a ghostly group of drag queen clones…Unfortunately, these cool scenes of sucky awesomeness are merely…a handful of scenes…”General Stone” seemed to be entirely comprised of this level of zaniness. Even the other positive attributes tend to be followed by a criticism. Casanova Wong gets to showcase quite a bit of personality, but his facial expressions were a bit too goofy…even when the scene is trying to be serious. He’s not a bad actor though. The fight choreography is pretty good, but it’s ruined by excessive under-cranking and choppy editing. It’s one thing to have a confusing story, but I occasionally had difficulty telling what was going on DURING the fighting. “Who is that?” “Did they just die?” “When did they enter the fight“, “how did they do that?” and “WHAT THE F@CK JUST HAPPENED!?” were questions which invaded my head during the battles. I also felt there was a lack of variety. All of the fights looked the same, even if the choreography itself was fine. I was dismayed to learn that Casanova Wong was the director, as apparently his inexperience sabotaged the action.

Nevertheless, even when the fights were disappointing me, they did occasionally catch my interest. Sometimes there would be a cool move or smooth flow, but the pacing of the overall flick was AWFUL. This is a relatively short film, but I was sure that the climax had been reached at around 45 minutes…but then it drags ON AND ON…Maybe this is because the story jumps around so much that it’s difficult to keep track of everything? The premise is about two princes being separated at birth while being hunted by the evil Government and one becomes the Monk. It’s a relatively familiar set up, but they never go anywhere with this storyline and as far as I could tell, the Monk never even learns of his identity…and what happened with his brother? That character just seems to vanish after being captured. There was already a reason for the villains to hunt our protagonist down, so I don’t know why that was there. Then they spend a lot of time on a tournament between the North and South Shaolin Temples, only for that to apparently occur off-screen as well. You see Mao traveling to the location…and then he comes back…Did I miss something here because the audio was so poor that it’s possible they mentioned it not occurring because of…something…I don’t know! But why was that bit there? The two styles never even clash despite the “vs.” in the majority of the titles. A quasi-love interest is introduced and it was kind of funny how she dies and there isn’t a moment of drama dedicated to her passing. So why was she there? Why did they introduce a second comedic duo when they already had one? “South Shaolin Vs North Shaolin” has this weird tendency to not introduce its new characters. One moment, they’re just there. And what was with the erratic passage of time? Or the sudden changes in climate? Or Mao having flashbacks to when he was an infant? WHAT THE F@CK IS GOING ON!?  This isn’t just too much story, it’s too much story that doesn’t contain any relevance to the primary story…which in itself isn’t especially relevant because there is no resolution. This is bad writing no matter how you look at it! The comedy also sucks too, relying on cliched kung fu humor that we’ve seen done billions of times. I never laughed…well, at least when it was trying to be funny. But I did groan a lot, so…good job? This also creates some mood whiplash, as a scene where the protagonist is mourning his dead friends is following by the wacky antics of the comedic relief duo which is followed by the protagonist mourning the dead comedic relief duo…While I cheered.

If I wanted to be nice, I might call “South Shaolin Vs North Shaolin” mediocre because it’s at least passable in the kung fu department and it rarely seems to stop throwing fights at us. But then I remember that despite the never-ending stream of decent kung fu, I was still eagerly anticipating the end credits to announce “The End“…which the film delivered accompanied by a kick to my face when it occurred during the middle of a shot despite not resolving anything. So I couldn’t even be happy when it actually ended…In fact, I ended up getting angry when it ended! Furthermore, even the fight sequences were hurt by inept direction and editing. But I still think they could’ve entertained me if the story wasn’t so intent on confusing me. “South Shaolin Vs North Shaolin“, you do not deserve the fire breathing ninja and drag queen ghosts which you contained! With shit like that, you should’ve been a lark! But instead you just ended up being below average…potentially the worst form of badness.

Overall: If you end up getting the “A Fistful of Kung Fu” film set, you might as well watch this if you have any time to kill…after you’ve viewed the better movies…