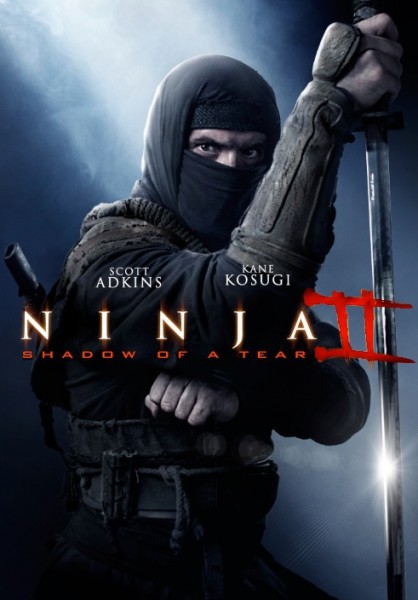 Plot: Casey (Scott Adkins) is a former ninja, trying to live a happy life in Japan with his pregnant wife Namiko (Mika Hijii). But when she is brutally murdered by an enemy ninja, he must track down her killer and get his revenge.

Can someone plays make an International Law that requires director Isaac Florentine and martial artist/actor Scott Adkins to spend 75% of their careers working together? Because when they’re apart, they’re liable to make “El Gringo” or “Assassin’s Bullet“. But when they’re together, they make direct-to-DVD cinematic magic. It says something when your weakest collaboration is either “The Shepherd: Border Patrol” or “Ninja“, both acceptable actioners with exceptional action. Granted, I think I would prefer an “Undisputed 4” instead of a “Ninja 2“, but a “Ninja 2” is better than “The Legend of Hercules 2“! The first “Ninja” may have delivered in the martial arts department, but I remember thinking that the plot was a mess, Adkins himself was kind of boring and for a movie about ninja called “Ninja“, there didn’t seem to be a lot of ninjutsu. It was fun enough, but as I said earlier, it was not one of the better examples of either mans abilities. Yet since then, Adkins has improved as an actor and Florentine has improved as a director, so maybe this will trump its predecessor in the same way that “Undisputed 3” surpassed “Undisputed 2“. Did it? ABSOLF@CKINGLUTELY! “Ninja II: Shadow of a Tear“, might have a snicker inducing, pretentious title and it might not have the meatiest of plots, but it’s wonderfully paced and the action scenes are PHENOMENAL. It improves on the strengths of “Ninja“, while making a point to correct its weaknesses.

“Ninja 2” has a very simple revenge plot and an even more simple narrative. Casey tracks down a group of bad guys who might know where his target is and then beats them up. It doesn’t take a detective to solve the mystery and any attempt to throw the audience off usually fails. But I am perfectly okay with that for a few reasons. For one, “Ninja” had a clusterfuck of a story and one of my bigger complaints was how convoluted it was. Apparently the filmmakers acknowledged that weakness, so developed a much leaner story that only exists to make room for spectacle. I also felt that this project was designed to be much more of a throwback to the 80’s ninja craze, containing all of the clichés that were born in “Revenge of the Ninja“. Hell, Kane Kosugi has a prominent role and he’s the son of Sho Kosugi (the man who began the 80’s trend). Granted, there is a fine line between homage and laziness when it comes to using conventions, but that’s how I saw it and I can understand if you feel the filmmakers are merely being unimaginative. The third reason is that Casey has a much stronger character arc this time around, even if it’s not perfectly handled. In the first film, he was a boring nice guy. In the second film, he has some serious anger issues and his obsession with vengeance leads him to make some serious- but believable- mistakes. The problem is that he never seems to come full circle. I never felt he conquered his personal demons, but the ending doesn’t suggest they still plague him, so it’s as if “Ninja 2“ forgot about his character development. Still, it made Casey more interesting and gave Adkins more room to act. I wasn’t very familiar with Adkins when I first saw “Ninja” and while I had praised his fighting skills, I stated that he ‘wasn’t a very good actor’. He has since proven me wrong, showcasing strong enough acting chops and charisma that he makes for a wonderful lead. He sold the drama, although while we’re on the subject, those cheesy flashbacks with his wife made me snicker instead of tear up. It’s nothing against the character, the actress or the story, but they’re so corny that they become difficult to take seriously. 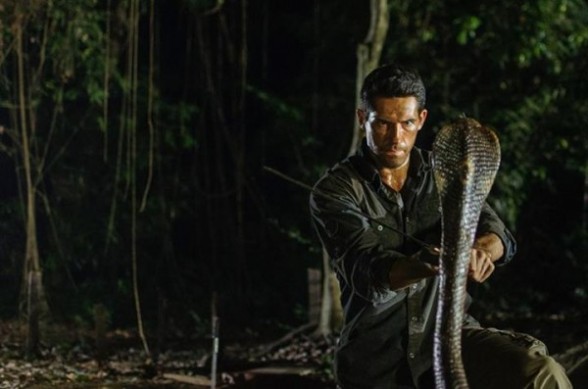 One thing that drove me insane about the original was even though Casey was supposed to be this elite ninja, he struggled with fighting generic thugs. Here, Casey has a lot more squash battles against the various hooligans, crushing them with ease. It means much more to be an actual ninja in “Ninja 2“. Speaking of which, there is a lot more ninjutsu this time around. I never understood why the ninja seemed to be normal karate masters in the first film, but here Casey makes more use of his ninja abilities. Hell, even the black suit is justified during the finale. Even though Casey seems stronger, he’s not invincible because even when he can easily pwn his enemies, there are always circumstances which make his victories mean something. He’s always fighting an internal battle, but occasionally he must evade the entire police force in a foreign country or having to disable some punks while stoned- yes, stoned. It increased the tension, adding a level of vulnerability to Casey while never making him look weak. I also dug the international feel of the picture. The locations change from Japan to Thailand to the artist formerly known as Burma (I couldn’t help myself), with the cinematographer being able to milk each of the locations beauty. Florentine’s visual style is pretty grounded this time around, rarely doing anything to distract us from the fight sequences. There’s less emphasis on framing epic shots, but whenever slow motion or post production trickery is used, it’s generally to amplify the choreography instead of driving it. “Ninja” produced some cool choreography, but the focus seemed to be on Zack Snyder-ish visuals and the graphic violence. He’s toned down the “300” inspirations and just opted to showcase the hand-to-hand combat.

Most of the gimmicks tend to be based around Adkins kicking ass with as few takes as possible, which makes the high octane mayhem come across as that much more amazing. Adkins is a natural performer and he uses a wide variety of insane techniques, although that weird spin double kick is tragically absent (maybe he can’t do that anymore?). But as Chuck Norris movies could attest to, having mad skills yourself won’t matter if your fight partners can’t keep up. It’s almost amusing how even these lowly thugs can use high kicks, but because they themselves are skilled enough, the fights have a flow. A lot of rehearsal obviously went into the fights because everything moves incredibly quickly- yet the editing is stable so the actions are easy to follow. Most of the fights tend to involve Adkins using karate and grappling against a larger group of people, which is good enough for me. But other fights do involve weapons and I thought the best fight involved Casey and Goro’s second-in-command. The takedowns during that confrontation- which were already stunningly awesome before- take on a whole new life and it’s interesting seeing Adkins resort to ‘villain-tactics’ in order to overcome his opponent. Funny that the second-in-command is a guy named Tim Man, who also choreographed the feature. If you look closely, he actually seems to be even FASTER than Scott Adkins, which plays into their battle. Even though the punches and kicks seem rather soft compared to what we got to “Man of Tai Chi“, there is one great shot where Adkins kicks a martial artist and it looks like his foot really sank into the guy. “Ninja 2” also deserves credit for pacing itself very evenly. The film knows when to slow down and focus on the characters, but a fight scene is always right around the corner. So not only is there amazing action choreography, there’s also a lot of it.

Some have accused  “Ninja 2” for allegedly having racist undertones and I can see why to a point. While I doubt it was intentional, the Asians are usually either portrayed as villain or as…dead. It makes sense within the context, since nearly every interaction Adkins has ties into the murder and since the majority of the runningtime is dedicated to fighting, it wouldn’t make sense to have a nice encounter. I did feel that the cab driver was a nasty Indian stereotype though. Once again, I doubt it was the intention but it bothered some people. If you don’t like martial arts action, then “NInja 2: Shadow of a Tear” is NOT for you. There’s not much outside of the fight scenes, but boy does it deliver when it comes to the fight scenes. I had a blast with this movie, as it improved on the already enjoyable “Ninja” in every way. I’d be really interested in seeing “Ninja 3“, if they choose to make it.

Violence: Rated R, but it’s not as gory as its predecessor.

Overall: I’d strongly recommend “Ninja 2: Shadow of a Tear” if the idea of an unending stream of epic fight sequences appeal to you, even if you weren’t overly fond of the first film. It’s pretty awesome. I feel 3.5/4 stars is a bit generous, but 3/4 seems a bit harsh. I think I’ll do the lower rating because I doubt those will dislike this genre will be happy.