(Written by John Jarrell and RZA) 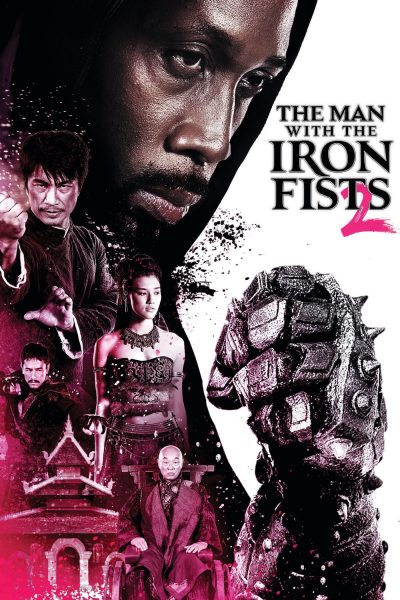 Plot: Thaddeus (RZA), the warrior blacksmith and titular man with the iron fists, has decided to repent and return to the monks who trained him. Unfortunately, he’s severely wounded before he can get there and eventually regains consciousness in a troubled mining village. The villagers are being preyed upon by a chi stealing serial killer and a vicious gang, so Thaddeus decides to assist the heroic Li Kung (Dustin Nguyen) in liberating their home.

You might be asking “Who wanted a sequel to “The Man with the Iron Fists“?“, but I’d respond with “Who wouldn’t want a sequel to “The Man with the Iron Fists“?” and you’d counter with “Everyone” and I’d be like “Oh, yeah…“. It’s not like RZA’s love letter to cheesy kung fu flicks that somehow acquired the talents of Lucy Liu and Russell Crowe was horrible or a financial disaster, but even its fans treated it with more amusement than enthusiasm. To be honest, I had forgotten about its existence until the sequel appeared in my path, even though “The Man with the Iron Fists” had so much bizarre material that it should’ve been burned into my memory. Yet I must remember that “Death Race“, “The Marine“, “The Condemned” and “12 Rounds“- which I still don’t remember- somehow spawned sequels and they all seem to be directed by journeyman direct-to-DVD filmmaker Roel Reiné, so they must be doing crazy business on the DVD market. I suppose “The Man with the Iron Fists” was an eccentric enough project that it would acquire a profitable cult following on the small screen, but I suspect it was RZA’s passion that lead to the creation of a sequel. Period pieces are usually costly and I can’t imagine a studio that specializes in low budget, Direct-to-DVD cinema would want to pursue a potentially expensive product. But if RZA was campaigning, his built-in fanbase would minimize the risk and to their credit, they gave him a passable budget to make a watchable movie. I’m not sure if they didn’t trust RZA with directorial duties or if RZA himself didn’t want sit in that chair again after facing so much executive meddling in the first film, but their chosen director ended up being…journeyman filmmaker Roel Reiné! I bring all of this up because “The Man with the Iron Fists 2” impressed me, even though it’s not a good movie. All evidence pointed to a safe, cheaper rehash of the original, but instead it feels like everybody involved wanted to make a really cool movie. “The Man with the Iron Fists 2” is surprisingly ambitious for such a small project, earning my respect…if not necessarily my love.

A lot of people have complained that the story is somewhat generic, especially compared to its crazier predecessor, but I think it shows that either RZA has matured as a writer or co-author John Jarrell functioned as a filter for RZA’s zanier ideas. “The Man with the Iron Fists” proved that RZA was prone to excessive indulgence, as he had many interesting ideas for characters, gimmicky weapons and wild situations, but the problem is that he had so many interesting ideas that he struggled with cramming them all into the narrative of a 90 minute movie. His debut felt over-crowded with creativity, which meant that none of these ideas had any time to breathe. I’ve since learned that his original cut had been four hours long, which would’ve been enough time to flesh everything out, but that is still a form of excessive indulgence…When was the last time you saw a kung fu flick that long? “The Man with the Iron Fist 2” has a simplistic narrative, but you can still see RZA’s weird fingerprints all over it. The dialogue is colorful and quirky and I’m not entirely sure whether it’s horrible or amazing, but it definitely grabbed my attention. There is a strange subplot involving a serial killer ghost mystery that initially seems superfluous, but actually ties in pretty well to the primary conflict. There is even a man with Iron Legs! RZA’s imagination is a great asset and I hope he continues he be involved in making movies, but I think his imagination needs to be delivered in small doses. Then he won’t accidentally bury his narrative with too many ideas, but his creativity is just enough here that it gives the film a quirkiness that separates it from the masses. “The Man with the Iron Fists 2” found the right balance of ‘odd’ and ‘normal’ for me and comes across as much more stable than its predecessor, even if it’s not as wild. I won’t say the script is perfect, as the finale seemed a bit rushed and emotionally unsatisfying. Innocence (Pim Bubear) is a horrible name for a character and the attempts at fleshing her out seemed half-assed. I thought they were building up to some sort of romance between her and the Blacksmith, but this angle was unceremoniously dropped without any kind of pay-off. I found myself becoming VERY frustrated with Li Kungs’ (Dustin Nguyen) passive aggressiveness. At one point he approaches the antagonist with the intention to confront him and the music is really trying to pump you up for an epic showdown, but then the villain just says “go away” and…he does….dude…Later on, he insists that he will avenge a certain tragedy, but then he backs off when challenged, only to change his mind when his daughter is threatened. That’s erratic character writing and his back-story was painfully under-developed. Yet I will admit that I found myself caring for the plight of these villagers and I reveled in their minor and/or temporary victories, while I wanted the villains to die in horrific ways. I liked how even minor characters were able to stand out in some capacity without devouring too much of the screen-time. While there are a few predictable twists and cliches, “The Man with the Iron Fists 2” occasionally defies our expectations. I was occasionally caught off guard! I like how in the long run, the Blacksmith is just as much of a danger towards the village as he is a savior. I won’t say that the script is great, or even good, but you can really tell there is a lot of heart behind it. 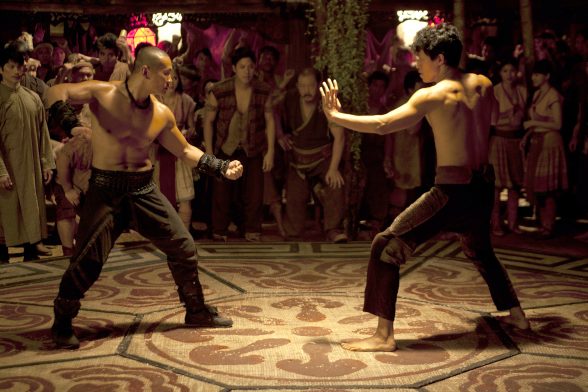 Roel Reiné’s visual style is designed to resemble a grindhouse feature from the 70’s, complete with grainy filters (or film stock? I’m not sure), amusing dubbing, a funky soundtrack, and cheesy, over-the-top violence. In a lot of ways, I think he accomplished the throwback angle a lot better than RZA did with the first film, although I will concede that this one lacks the energy of its predecessor. It’s much steadier paced though, building to a bizarre finale that boasts impressive production values, strange gimmicks and hyper-active camerawork. I do feel like story elements were rushed during the third act, but the sheer spectacle made up for it, especially when it came to the ‘so bad, it’s good’ gore effects. There is a lot of action spread throughout the narrative and the fight scenes are…OK. The choreography is mostly just average, but the director at least keeps the camera steady and the editor doesn’t chop the majority of them up, a trait even most bigger budgeted kung fu exploits can’t even seem to get right. There were a lot of weird movements and stances that neither looked cool or practical though, so I’m not sure what the choreographer was aiming for. The sets occasionally appear cheap, but they have a nice exotic flavor to them and the sweeping wide shots captured their beauty nicely. The camera always seems to be moving, giving a nice dynamic to the visuals without being desperate. Unfortunately, they continue to use rap music for a large chunk of the soundtrack and it’s very distracting. The music never really felt right, often blaring when it should’ve been subtle or being subtle when it should’ve been blaring. The acting is uneven, although thank God the Blacksmith (RZA) is NOT the primary protagonist, as his line delivery is pretty terrible and his fight scenes were the weakest. The real protagonist is Li Kung (Dustin Nguyen), and Nguyen gives a dignified performance, even if I took issues with the character. Cary-Hiroyuki Tagawa is excellent as the Mayor and his acting becomes the best thing about the movie during the finale. I also really enjoyed Carl Ng as Master Ho, whose over-the-top delivery was perfect for his over-the-top lines. The remainder of the cast varies, but at least everyone looks like they’re having fun. For the most part, “The Man with the Iron Fists 2” has had a cold reception amongst critics and general viewers, leaving me firmly in the minority for actually liking this. I won’t say it’s ‘good’, as even I can’t deny the flaws, but I do consider this to be the yang to the yin that was “The Man with the Iron Fists“. The first was all about style, while this strives for substance. The first was flashy, energetic and encumbered by its own imagination, while the second was more restrained, steady and uses its imagination to enhance the story instead of weighing it down. But both movies compliment each-other nicely in my eyes and I like that the sequel is not trying to imitate or emulate the original.

Violence: It’s gory, although the violence is not as polished or as consistent as its predecessor. The cheesiness at times reminded me of “Riki-Oh: The Story of Ricky“, which is never a bad thing!

Nudity: Um, as I wrote this section a few weeks after watching the movie, I don’t remember! I don’t think there was any explicit nudity or sex, but there is a lot of sexuality (mostly dialogue oriented and implications of sex to come).

Overall: “The Man with the Iron Fists 2” provided enough entertainment for me, but seems to have underwhelmed the masses as I haven’t seen too many positive reviews. Maybe I’m the only one who understands it. Maybe every individual will have strange and unpredictable reactions to various forms of art that transcends their definitions of good and bad. Or maybe I have shit tastes.