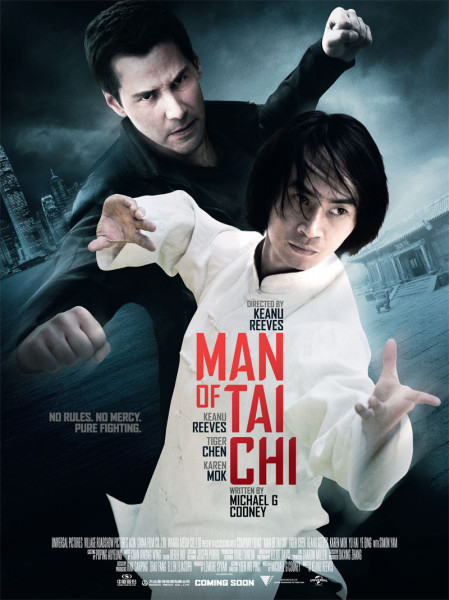 Plot: Tiger Chen (Tiger Chen) is an honest and humble Tai Chi practitioner who wants to show the world that Tai Chi can be taken seriously as a combat martial art. He catches the attention of Donaka (Keanu Reeves), a wealthy man who organizes underground fights for rich clients. Tiger reluctantly decides to fight for him and starts to lose himself in the violence.

If “Man of Tai Chi” had been produced 10-15 years earlier, it would’ve been backed by major distributors, who would’ve pushed the movie to the moon in giving it a theatrical release. Unfortunately, the martial arts craze died out as quickly as it began and Keanu Reeves is not the major draw he used to be. In the past 10 years, all Reeves has given audiences are disappointing sequels, direct-to-DVD B-movies and the colossal bomb known as “47 Ronin”. So Keanu’s venture into kung fu was given a limited release before being dumped onto DVD. The tragic part is that “Man of Tai Chi” is actually an exceptional action flick, one that deserved a major push by distributors during the abysmal cinematic output of 2013- the year that thought “Getaway” deserved a wide release. “Man of Tai Chi” is not a great film, as the story is pretty convoluted, but it is a great martial arts flick. Besides boasting some AWESOME fight scenes, it also finds interesting ways to work around the stale clichés which usually plague this kind of story.

Even though I made a point to differentiate ‘great movie’ and ‘great martial arts movie’, I guess I should explain why and how in this case, I’m glad “Man of Tai Chi” narrowed its goal to primarily please its fanbase. If “Man of Tai Chi” was a great movie, it would’ve done a much better job of fleshing out Tiger’s development. As always, Tiger begins as a nice guy who is slowly corrupted by the realm of underground fighting. The problem is that Tiger makes this transition too abruptly. One moment, he is lovable Tiger and the next, he’s become kind of a douchebag. When he realizes his mistakes, he’s suddenly the old Tiger Chen. This ‘flaw’ is blunted however by Tiger’s acting. He sells the development where the screenplay didn’t offer much room. But why am I glad “Man of Tai Chi” rushed the development of its protagonist? Because if it didn’t, there would be less emphasis on the fight scenes, which is what I’d want. There is another reason for this, which I’ll get into a little bit later. While we’re on the weaknesses of the film, I’ll also concede that the cop subplot took too much time (although it was never boring), the love interest subplot was pointless (isn’t it always?) and the ending was a bit clumsily handled. It’s one of those endings where you get the impression that the filmmakers aren’t sure how to end the film, so wrap up every loose end in a contrived and hurried way. Also, the CGI car crash was a pretty goofy looking effect. BUT ENOUGH OF THIS CRITICAL BULLSHIT THAT I WOULDN’T EVEN BRING UP IF I WASN’T PRETENDING TO BE A REAL CRITIC! These flaws are present, but they didn’t impede on my viewing pleasure…and make no mistake, I pleasured myself vigorously during my viewing. 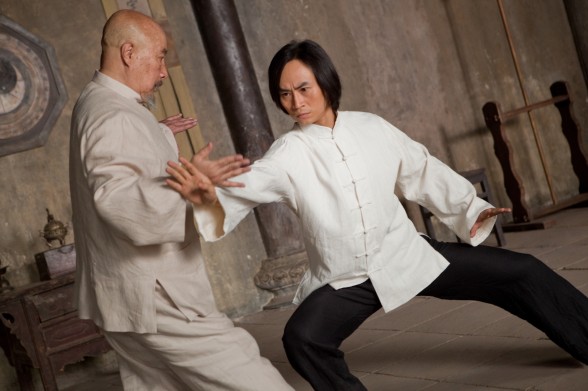 But those fight scenes…damn….If I can criticize the action choreography for anything, it’s that the first major fight (the interview) was so spectacular that it became impossible for “Man of Tai Chi” to live up to it. The choreography was pretty much perfect, with the performers being able to sell all of their techniques. Everything moves very fast, but it all looked like everyone was showing off natural abilities instead of relying on sleight of hand editing or sped up camerawork. The sound effects give an air of authenticity to the battles and bone crunching noises added to the brutality. Even if Tiger’s development was crude on paper, martial arts fans might notice that his fight style develops throughout the course of the film. Initially, he uses pure Tai Chi, but every fight has him evolve his style to become more practical. There are a lot more holds, throws and power reliant strikes, which makes an interesting contrast to Tai Chi (it’s very noticeable when he fights his Master). Of course, during the finale, he returns to his roots. Even though there are some lines which suggests this, the idea is never spelled out for the audience, which I was appreciative of. Wait a minute…Tiger Chen’s development was shown through his fighting style? That’s also a part of the reason why “Man of Tai Chi” is a great martial arts flick, but not a great movie. If you aren’t a fan of this genre, you’re just not going to get it. Keanu Reeves is probably the weak link when it comes to delivering kicks and punches, but he doesn’t do a bad job as much as he’s just not as skilled as everyone else. The finale turned out shockingly well because they use his real life limitations to provide a more dynamic battle (he’s slower than Tiger, but he’s stronger). Fans of “Merantau” and “The Raid: Redemption” will be pleased that Iko Uwais (the lead of those two flicks) shows up, although they might be displeased when they realize it’s only a cameo. Still, he delivered an amazing action sequence with Tiger. Yet the fights themselves aren’t the only cool thing about “Man of Tai Chi”.

We’ve seen the underground fighting story done many times before, but there are some really cool twists involving the ‘why’. Yet Reeves also seems determined to make his film stand out amongst the masses by utilizing set design. When I think of ‘underground fighting’, I think of the locations in “Ong Bak” or “Kickboxer”. The locations in “Man of Tai Chi” include this high tech boxy room that looks like it belongs in “Cube” and high end cocktail parties for the wealthy. A lot of attention was put into making these places vividly colorful and there’s a lot of detail in the costume designs too. Not a single prop or set looks conventional or bland. Keanu also uses lighting to drive his visuals. Everything is either perfectly lit, so we can see everything clearly or it will be darker and more menacing. During one major fight, there’s a strobe light that can be rather obnoxious, but also adds quite a bit of intensity to the action. You start to really feel like the protagonist- overwhelmed, but in a way I believe was intentional. Keanu also makes use of shadows and mist, creating a kind of haunting atmosphere. Visually, “Man of Tai Chi” is incredibly inspired and the score is freaking epic, matching the visuals flawlessly. The acting is good too. Tiger Chen makes a good leading man and Keanu Reeves makes a chilling villain (although he makes some silly faces). Reeves made sure to acquire a strong Hong Kong cast, who are playing typical roles, but are professional enough to turn in solid performances. This is not a movie where the acting really matters, but it’s better than it needs to be, so I’m happy. 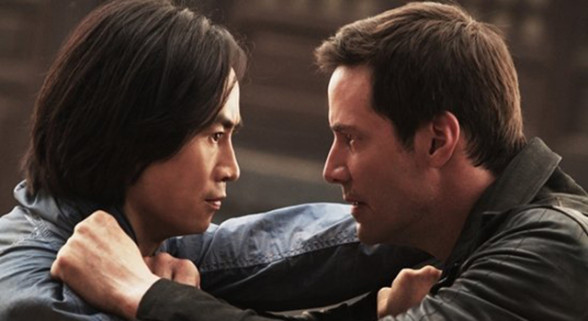 To fix “The Man of Tai Chi” is to break it- now marvel at my poeticness…Poeticness is a word, right? Yes, there are some serious issues with the films narrative, but those issues also benefit the narrative because they put the emphasis on bone breaking fight scenes. Hollywood has never had a great track record when it came to producing martial arts flicks, primarily due to differences in focus. Jackie Chan once said that in Hollywood, they would spend 20 days on a dialogue oriented scene and only 2 days filming an action scene. But in Hong Kong, it’s the opposite. Keanu Reeves had a clear cut vision for “Man of Tai Chi”, that it would excel as a martial arts film and everything else would be second nature. But he didn’t stop there, also being sure to give us cool visuals, intriguing plot developments and a respectable cast. I really loved this movie and hope it turns out to be a major success, even if only as a rental. WATCH IT! WATCH IT NOW!

Overall: “Man of Tai Chi” is a MUST SEE for fans of martial arts flicks. It’s awesome.