(Written and Directed by Stephen King) 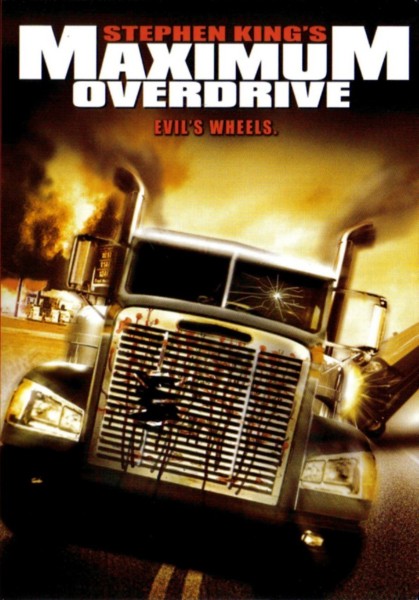 Plot: A mysterious comet causes machines to come to life and start attacking humans. A group of survivors find themselves trapped in a gas station and must try to survive.

I can only imagine that “Maximum Overdrive” had Hollywood murmuring secretively, casting curious glances towards Stephen King and his movie. You see, it wasn’t just an adaptation of his short story, “Trucks”. It also marked the big, directorial debut of King himself. He had developed somewhat of a reputation for slamming past adaptations of his works (“The Shining” being the most notorious example), so everyone wondered what he would do differently. When it was released, everyone reacted as if they had a personal vendetta against the maestro for disparaging their films. It was declared the ‘worst Stephen King’ movie.

Critics bared their fangs and sharpened their claws, tearing apart the implausible story that was filled with plot holes. They bathed in the blood of its bad acting, silly dialogue and annoying attempts at comic relief. They left enough room in their appetite to devour the crappy direction. Every special effect failure, every bizarre use of the AC/DC soundtrack and the bi-polar- no, full on dissociative identity disorder- tone was carefully picked apart. Then eaten. The critics proceeded to laugh maniacally, their bloodlust not quite sated, as they turned upon the creator. Initially, King claimed it was meant to be a parody, but soon he was forced to break down into tears. He would admit that he was drugged out of his mind and that “Maximum Overdrive” was a ‘moron movie’. The critics had won.

Little did King and the Critics know that one man- if he was truly a man, for is a moron a man?- would stand up in the name of justice. He would oppose the critics and King and declare: “I LIKE MAXIMUM OVERDRIVE”. He was too small for anyone to notice, so nobody cared, but the man didn’t pay any attention to that. He had made his stance and the opposition responded…by not responding at all for they were not even aware of this man’s existence. Yet in this brave reviewer’s mind, he had been nothing short of victorious, defending his prized possession. For what is a ‘moron movie’ to a moron? To the moron clan, it is just a movie. That man…is MartialHorror.

Okay, in all seriousness, I grew up with “Maximum Overdrive”. There is a lot of nostalgia and even though it had been 5-10 years since I’ve last seen the film, much of it has stayed with me. Everything I pointed out during the second paragraph is valid. It is technically a pretty bad movie. But it somehow takes those flaws and converts them into something fun and charming. The acting ranges from sleepwalking (Emilio Estevez) to stiff (Laura Harrington) to over-the-top (Pat Hingle), but I can’t deny that I had fun watching them in all their failed glory. The dialogue is probably responsible for the performances- as the cast did have a lot of talent- but it made me snicker quite often. I especially love when it comes across as sincere, which makes everything even funnier. The comedic relief…okay, that was pretty annoying. I couldn’t stand the noisy wife and the occasional minor character. I thought “Maximum Overdrive” was hilarious when it was trying to be serious, but it was obnoxious when it attempted actual humor. 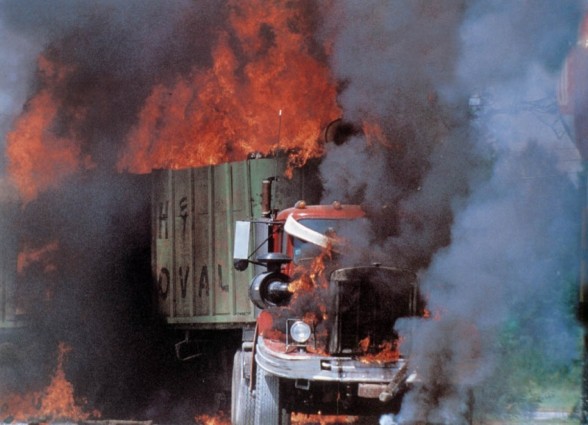 One thing I appreciate is that even though it was a B-movie in style, it did have some nice production values. It utilizes its premise well, so expect some ambitious scenes like the drawbridge raising prematurely. The explosions were pretty cool too, even if the trucks suddenly stop right before so they can explode without risking the lives of the crew. King doesn’t do a very good job at building suspense or creating any kind of atmosphere, but at least his attempts are amusing. The weird, “Psycho”-esque music that would play always had me in stitches. I wouldn’t ever call “Maximum Overdrive” scary, but it can be pretty intense and unnerving. It definitely has a mean streak and this made it a little unpredictable. You’ll have a goofy scene of some poor asshole getting hit in the nuts by a rabid soda machine, which is followed by a horrifying shot of a kid being crushed by a steam-roller. There’s plenty of action, so even if you’re thrown off guard by the…let’s just say questionable…quality of the film, I don’t see how it can bore actiontards such as myself.

But beyond everything, I found “Maximum Overdrive” to be entertaining. It’s definitely not good, but I think it’s a little unfair to just dismiss it as bad. While I suspect that King was trying to save face in claiming it was intended to not be taken seriously, there might be some truth to that statement. There is a lot of ‘humor’, even if most of it fails. But also, the main villain is a truck with a devil face that has glowing red eyes on the grill…The protagonist at one point talks to the vehicle about how he has gasoline, but he pitches it as if he’s selling drugs. The trucks take the place hostage so their tanks can be refilled, even though they’ve spent the entire night driving in circles. Does this sound like a movie that was meant to be taken seriously? Maybe it was, but King was on Cocaine. Have you ever been able to take a junkies’ musings seriously? But that’s part of the fun. It’s so wild and crazy, that I can just sit back and enjoy myself. Had King been sober, I doubt it would’ve been as enjoyable. So yeah, I like “Maximum Overdrive“. It gets snuggins from me!

Violence: Rated R. It has some grisly parts.

Nudity: None, but there is off-screen sex. Actually, there are a bunch of nude pictures on the wall at one point.

Overall: “Maximum Overdrive” is a lot of fun for anyone who likes a good dosage of cheese in their diets. If you want to be critic-y about it, go watch something more respectable.