Plot: Ryder (Dolph Lundgren) is a Bible reading drifter who rides into town on his motorcycle, so he can attend the funeral of a friend. He suspects foul play was involved though, so decides its time to smoke out the culprits and kick some ass.

“Missionary Man” is a modern day western which is written by, directed by and starring the master of mediocre himself, Dolph Lundgren. Apparently Clint Eastwood was Dolph’s inspiration for getting into directing and that’s pretty obvious with “Missionary Man“, which borrows a lot from “Pale Rider“. It also ‘borrows’ from “Billy Jack“, “High Plains Drifter” and potentially ever movie ever made…some more than others. I have nothing against homages or paying tribute. When used cautiously, they can get the fanboy blood pumping. But when used excessively, which is what “Missionary Man” does, it becomes a problem because the films identity becomes lost amidst all of its references. If it sucks, then that feeling of disappointment is magnified because it continuously reminds us of better movies. If it’s good, then that’s probably because it coasted off of the high quality of its predecessors. “Missionary Man” isn’t good, but it doesn’t suck either. Yet when it works, it’s primarily because it’s using ideas from better movies. When it fails, it’s because other movies did those same ideas better.

I don’t think “Missionary Man” failed completely on any level, but it also doesn’t stand out on any level either. It’s best attribute is Dolph Lundgren himself. Lundgren has a lot of presence and his performance played to his strengths. He’s a man of few words, yet his intense gaze communicates everything we need to know. He’s badass, having the physical presence and the right attitude to pull off his persona. The Bible quoting thing was lifted from “Pale Rider“, but I really liked it because it is such an interesting contrast to his rugged, almost thuggish appearance. Yet the man is a drinker, so he’s not necessarily saintly. Him needing reading glasses was a nice touch too, as it added some vulnerability to the character. So Lundgren had a good role to play and does a solid job of carrying the film on his shoulders. The supporting cast is pretty uneven, but I felt the key players made their roles engaging. I loved to hate the villains and the heroes were sympathetic enough to where I did not want them to die. I was mixed about the portrayal of Native Americans. On one hand, they can be pretty stereotypical. But the stereotypes are limited to the older characters and the actors were strong enough to give them a sense of humanity and dignity. So there was more to their characterizations. Even though there are a few rotten apples, the acting was mostly fine. It’s strange that the acting is what redeems an action movie, but the important thing is that I’m invested in whats going on. 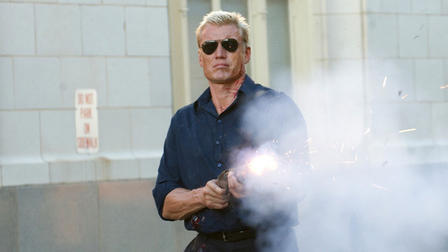 The script was penned by Lundgren and Frank Valdez, whose mainly known for…well, this! Unfortunately, the script is a disjointed mess. The premise is simple, but the narrative is clunky due to a feeling of deja vu. There are too many scenes where thugs pick on someone and Dolph steps in to kick some ass. It gets old because the fights resemble each-other (more on that later), the situations all seem the same and Dolph is invincible. He’s too strong to where you never feel any of the villains are a match for him. The story is convoluted as hell. There are too many characters whose purpose in the story is minimal (the hotel owner) and sometimes, whose fates are left unresolved (the hotel owner). The villains primary motivation is to build a casino and they are killing those who get in the way, so having them also rob drug dealers felt unnecessary. Or what about the villain being attracted to the love interest? Never goes anywhere! Characters motivations in general don’t always make a lot of sense. The most glaring is when the antagonist berates his partner for killing the drug dealers because relatives will seek vengeance, but then he goes on to kill two deputies out in public. Don’t cops usually become hardcore themselves when dealing with cop killers? Apparently not in this movie! When the Eastwood references starting coming into swing, mainly the origins of its protagonist, it just…didn’t feel right. It reveals too much to keep it from being a surprise, but not enough to where it makes any sense. One loose end is someone who gives Ryder a shotgun. You feel like a large chunk of the story was removed at some point, but for some bizarre reasons, they left traces of these unused subplots in the finished project and it raises the wrong kinds of questions. Still, at least the writers tried to keep things engaging and they didn’t necessarily fail. For all of the problems found in “Missionary Man“, it never lost my interest.

Dolph Lundgren’s direction is uneven. The cinematography didn’t quite click with me, as everything looked too bleak but in an aesthetically unappealing kind of way. But I will admit that at times, Lundgren was able to create a haunting mood. Even though I’m not sure if it was intentional, characters with mysterious intentions will sometimes have their faces covered in shadows. Unfortunately, the action scenes sort of blow. Lundgren over-uses slow motion and by over-use, I mean its present in every fight with the exception of the finale. Usually, slow motion is supposed to emphasize the authenticity of the technique, but it made everything seem more telegraphed and phony. Some hits obviously didn’t connect, which is more apparent when slow motion is used. Dolph can still deliver in the martial arts department, as “Universal Solder: Regeneration” and “The Expendables” showed us, but he doesn’t seem to know how to choreograph fights himself. Plus, they’re boringly one sided and they end rather quickly. The finale is better, primarily because it aims to be more chilling than exciting. Enemy bikers split up…because they aren’t very bright..and find themselves being stalked by an angry Dolph Lundgren. The suspense is surprisingly edgy in this, although it’s anti-climactic. Dolph tries to deliver some really cool shots, but most of them are bungled due to awkward staging. The most obvious is when a villain is hanged and we see his legs dangling violently as Dolph calmly walks away. Great idea, right? But the effect is lost because we were supposed to see Dolph between the dudes legs (er, could’ve worded that better). The corpse (or stuntman) ends up turning to the side, ruining the effectiveness of he shot. Still, part of the reason why I keep following Dolph’s direct-to-DVD career is that he does try. He always aims to have interesting stories, characters and visuals…Laziness is my greatest enemy in the realm of film, but Dolph aint lazy. 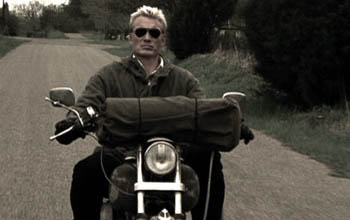 “Missionary Man” might not be bad, but I wish it was more enjoyable. The first half is too slow paced, while the second half feels like its missing footage. The script was sloppily cobbled together and Dolph’s direction was amateurish. Yet at the same time, I kind of like it in parts. The story might be sloppily thrown together, but underneath all of that convolution is a beating heart. The characters are actually endearing and I didn’t want to see anything bad to happen to them. I was interested in where the story would go, even if the writers provided with me a bumpy route to follow. But most of all, Dolph Lundgren is awesome. I liked his character and liked how he was used. As a director, he has potential, although as of 2013 he’s yet to really capitalize on this. “The Killing Machine“, “The Russian Specialist” and “Command Performance” were only marginally better, if they were superior at all. I think your casual viewer will dismiss “Missionary Man” with a shrug, because while it’s not the bottom of the barrel for direct-to-DVD actioners, it’s not at the top either. “Missionary Man” is mediocre, but that’s what I expect from the Master of Mediocre. But hey, that’s better than what Seagal tends to give us.

Violence: Rated R. Pretty nasty headshot near the end. Nothing else stood out, although there is an implied, off-screen rape.

Nudity: None. There is an off-screen sex scene.

Overall: “Missionary Man” is only worth watching if you’re a fan of Dolph Lundgren. I am, so I didn’t regret the experience, but you need to decide whether he’s cool enough to make up for an otherwise average flick.