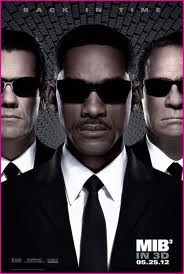 Plot: Agent J (Will Smith) and Agent K (Tommy Lee Jones) are still among the top agents of the Men in Black, an organization built to deal with extra terrestrial threats. Yet K seems oddly distracted and this comes to haunt them when Boris the Animal (Jemaine Clement)- an old Nemesis of K- breaks out of his prison on the Moon. He gets a hold of a time travel device and suddenly, K is gone. The only person who remembers him is J. Well, it turns out that K had been responsible for stopping an alien invasion and Boris managed to rewrite time by going into the past and killing K. Now J must go back in time himself to stop Boris and rescue K (now played by Josh Brolin).

It’s been years since I saw “Men In Black” or its much maligned sequel, so perhaps I’d feel differently if I saw then now. What I liked about the first movie was that it never got lost in spectacle. It was less about the special effects and more about our reactions to them. It would often be scary, dramatic, funny, intense, adventurous and action packed, all at once. It was the full cinematic experience. It’s sequel was a hollow shell of that. Honestly, the only thing I remember about “Men in Black 2” was the (certainly impressive) special effects, which were flashy but seemed to lack substance. “Men in Black III” is trapped somewhere in between. It did leave an impression other than “it’s pretty“, but so much about it seems underdeveloped.

“Men in Black III” is a harmless, amicable and even enjoyable actioner that has a lot of good stuff going for it. It has a great cast. Not only are Will Smith and Tommy Lee Jones in fine form, we also have Josh Brolin as the younger K. I was dubious about this at first, but Brolin nails it, doing a perfect impersonation of Jones while also managing to do his own thing. Brolin is one of the best actors of today and his presence adds a touch of class to the proceedings. Jemaine Clement, who I only know as the eccentric artist from “Dinner for Schmucks“, was an even bigger surprise. The guy was freaking menacing, as his make-up and CGI additions were fantastic in an understated kind of way. 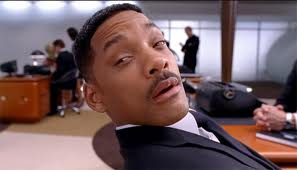 While the humor doesn’t always work because it has the tendency to be a little overblown or juvenile, there are plenty of funny moments. I often liked the dialogue, the characters expressions and most of all, there is something breezy about the pacing. It’s never slow or dull. The special effects are flawless, not a single moment standing out as fake or awkward looking. The action is well staged and choreographed, while also having a bit of a mean streak. I can’t say I appreciated the 3-D. It never got in the way, but honestly, I rarely noticed it (although the laser light show was pretty cool). But the CGI is great!

So what went wrong?

The films biggest disappointment only hit me once I learned what the budget was. The numbers vary between $200 and $250,000,000 dollars and…where did all of that go? As I said, the CGI was perfect, but there never seemed to be a lot of it. The gadgetry, the differing alien species, etc all seem missing throughout most of the film. The bulk of the movie focuses on the interactions between the characters, which would be fine had….well, I’ll discuss that in the next paragraph. When there is a vehicle chase scene, a shoot out or a new alien species introduced, there is a feeling of deja vu. I’ve seen all of this before. Did the money go to the actors? Was it devoured by the troubled production? I don’t know, but I did not see a $250,000,000 movie here. I saw a $150,000,000 dollar movie. Say what you will about “John Carter“, but at least that movie showed off its budget. Here, the excess spending isn’t on the screen, which is the worst thing a big budgeted movie could do. Sometimes, I got the feeling that they ran out of money before they even finished it. For example, they seem to be building up to a big transformation/battle near the end, but then it just stops. If “Men in Black II” was nothing BUT pretty visuals, I felt the third entry needed more pretty visuals. 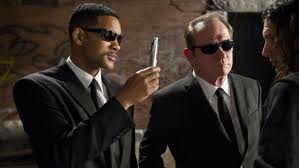 The script has a lot of endearing ideas, but sadly, there’s never enough time spent on them. I don’t know if a lot of this movie ended up on the cutting room floor or if entering production with an unfinished script was just a stupid idea, but it never fleshes out anything. K spends the first act bothered by the death of his boss (formerly played by Rip Torn), perhaps struggling with the idea that his demise might be approaching soon. But is there any pay off to that? Nope. J keeps asking the younger K “what changed you?” when K shows more of a personality. They at least do explain that, but it seemed contrived and poorly developed. What about the relationship between K and O? They keep alluding to that, but it’s concluded with a cheap throwaway line. This movie wanted to be more than a typical summer blockbuster, but there wasn’t enough time put in the script. Entering production without a completed script is NEVER A GOOD IDEA!

Yet I have to give the movie credit in that it did occasionally move me. Why did K change? That answer is actually sort of touching and effective. But all this, the superb CGI, the great cast and the awesome villain only gave me a taste of what could’ve been a great movie. Instead, it’s just underdeveloped and underwhelming. It goes down so smoothly that you barely notice it. Instead, like “Dark Shadows” before it, I had to marvel that the movie failed to utilize all of its resources and talent. It could’ve been great, but it only ended up being okay. I was torn between a 2 and a 2.5 star rating and ultimately decided on the former. I did find enjoyment out of it, but it should’ve been better.

Overall: “Men in Black III” is a step up from its predecessor, but it’s not really a good movie. I’d say it’s worth watching if it interests you. If not, don’t bother and if you’re on the fence, wait till its released on DVD.