If a movie is remade, sometimes I acquire the original along with the remake and watch them both back-to-back. Just recently, I (re)watched the 1982 cult classic, “The Thing” and followed it up with the 2011 not cult classic, “The Thing” prequel. But what some people don’t realize is that the 1982 film was actually a remake of “The Thing From Another World“, which the prequel often paid tribute too. As a lover of the 1982 version (indifferent to the prequel), I decided to check this one out and is it good? Sure, but it’s only vaguely a horror film. 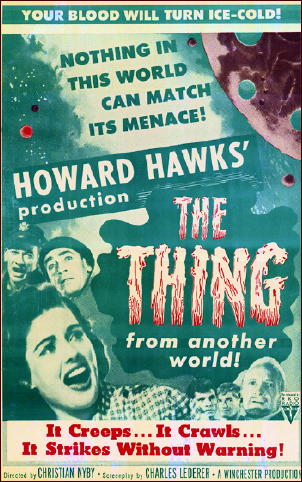 Captain Hendry (Kenneth Tobey) is stationed at a military base in Antarctica when he’s ordered to take a few men and fly to a remote outpost. It turns out that a mysterious aircraft had crashed up there and he must investigate it. Much to his surprise, it turns out to be an alien spacecraft. Unfortunately, they accidentally destroy the ship, but then they find the frozen body of the alien itself! They bring it back to the base, but it’s unintentionally thawed out and it goes on a rampage, killing anyone it crosses and draining its victims of their blood. Worse, it’s highly intelligent and the scientists and military personal must work together to stop it, presuming they can cease arguing amongst themselves.

I had forgotten that there was once a time when Science Fiction was an actual genre. This statement might confuse you, but these days, it is very rare to see a true Science Fiction film. Generally, it’s more of a setting for another genre of film. “Alien“, for example is a horror film that uses a Sci-Fi setting. Some might say it’s a hybrid and I can understand that, but it just goes to show that Science Fiction cannot stand alone anymore. The closest films I can think of are “Moon” (which I consider to be a drama), “Solaris” (either drama or thriller, I was too bored to notice) or “2001: A Space Oddyssey” (which might’ve been the last true science fiction film). Yet in the 1950’s, true Sci-fi was a favorite genre. You had this, “The Day the Earth Stood Still” (the remake is an action movie) and countless others. They were very talky, more about ideas and theories more than any kind of action. My point is that “The Thing From Another World” is 90% science fiction, 10% a horror film. If you go into this movie expecting anything similar to the Carpenter classic besides the opening title and the location, you will be sorely disappointed.

So “The Thing From Another World” is about ideas. It asks questions of ‘if Monkeys became humans, then what will plants evolve into?’. I think it’s a pretty engaging concept and it’s made compelling by the movies sharp dialogue (that is often funny) and stellar acting. With a movie that’s primarily about explaining or theorizing, solid dialogue and acting is a necessity. Much like other films of its ilk, “The Thing From Another World” is also about real life concerns. You’ll notice subtext about the Cold War, the use of the H-Bomb, etc, etc. It gives the movie depth, especially as it’s not heavy handed with its message.

There are still a few genuinely startling moments. The alien is pretty freaky merely because the film keeps him in the shadows, but the director (s?) do a phenomenal job at keeping its viewers on edge when it comes to the monster. My favorite scene is when a character is counting down to the creature’s arrival and suddenly it bursts through the door. It is beautifully framed and even got a jump out of me, but there are other sequences of impressive suspense or intense jump scares too. I don’t think it’s a horror film, but when it wants to be, it is an impressive one.

Anything else I can say? The characters aren’t compelling as individuals, but as a group they managed to catch my interest. The pacing is a bit iffy though, probably because of the tacked on love story. But awkward pacing is a prevalent issue with old movies like this. On another note, sometimes the dialogue is very adult for a movie this old. There are some allusions to sex and they describe people with their throats slit in graphic detail. But otherwise, that’s all I’ve got. “The Thing From Another World” might seem dated to you, because it’s like 60 years old now. It might also bore you if you expect a horror film instead of pure science fiction. But for a movie made in 1951 that belongs to a mostly dead genre by today’s standards, I thought it was pretty impressive.

Violence: It’s PG I think, but it is fairly edgy for a movie this old.

Nudity: None, although some of the dialogue brings sex to mind.

Overall: If you like these old movies and haven’t seen “The Thing From Another World”, check it out.