While “The Raven” might not be perfect, I find it startling how severely it was rejected by critics. You’d think that a throwback to a more respected age of horror (the 1960’s) that deals with classic literature and puts more emphasis on character than mayhem would be the golden child for the critics. But it wasn’t and I feel like I’m the movies biggest fan. It’s nothing spectacular, but I do think it’s a good movie.

Plot: The citizens of Baltimore are terrified when they are preyed upon by a vicious killer whose murders are clearly inspired by the works of Edgar Allan Poe (John Cusack), When Detective Fields (Luke Evans) realizes the connection, he brings Poe into the investigation. Unfortunately, this leads to the abduction of Poe’s fiance (Alice Eve). Now they have to hurry and solve the mystery, while being forced to cater to the killers whims. Can they stop the murderer and rescue the girl?

What keeps “The Raven” from greatness is that at its core, the film really is just another cat-and-mouse horror-thriller that’s just dressed differently. These movies all seem to share the same narratives and conventions.. The protagonists discover something important, but the killer is always steps ahead of them. The revelation as to the killers identity isn’t meant to be all that big of a twist as it’s more about the journey than the destination and the killer is almost absurd in his genius. Am I really supposed to believe that this guy is trained enough to kill armed policemen with a knife, learn how to build elaborate death traps in short amounts of time and plan so many steps ahead without making any mistakes? I guess so, but the “Saw” movies were no different in terms of narrative and the problems that came with it, so why should I be any harsher towards “The Raven“?

What kept “The Raven” together was its attention to character. The actors all manage to make their characters interesting, even down to the police. With Poe himself, the writer (and Cusack) possibly were drawing inspiration from those new “Sherlock Holmes” movies with Robert Downy Jr. Every line of Poe’s seems meticulously written and a lot of effort is put into fleshing him out and developing him. On one hand, Poe is a self important, pessimistic drunk with a mean spirited sense of humor. On the other hand, he can be brave, intelligent, witty and heroic. Yet the movie never goes too far with this. Some scenes leave him shaken and we never get the impression that he’s meant to be some kind of badass. John Cusack, who has become somewhat of a hired gun as an actor, actually ‘acts’ this time around. He throws himself into the role and has a lot of fun with it, showcasing a variety of emotions that makes Poe seem less of a caricature and more of a human being. The supporting cast is just as strong and a lot of effort goes into them as people. Perhaps it was just because the actors were so good, but I found myself liking everybody.

In fact, “The Raven” is one of the only films of its ilk to boast an endearing love story. The movie doesn’t try to build it out of thin air, as the couple had already been together for quite some time. But it spends enough time with their romance that I cared when the girl was put into danger. This is, unfortunately, comes at the cost of pacing. The opening act is very choppily paced. It would move from interesting to sort of dull very quickly when it might’ve been more effective if they just continued building and building the suspense. Instead, it builds, stops with a romantic scene and builds some more before stopping again. Luckily, the pay-off was effective, as the time spent on the couple meant that their fates mattered to me. Plus, once it gets out of the first act, it then becomes a riveting roller coaster ride. But the first act, while having substance, was a little awkward and clumsy.

Once the second act kicks into gear, it becomes a true thriller. The scenes either involve the killer’s gruesome murders…actually, let me interrupt this train of thought for a moment because this sadly leads to another criticism. I quickly forgave the CGI settings, but the computer generated gore was pretty weak. It softened the impact of the killers. Furthermore, the Pit and the Pendulum death was rushed. Part of the point of that is the suffering the victim goes through BEFORE it starts cutting flesh. When the killer isn’t killing, the film smartly focuses on the investigation. The detective and Poe will go through the clues and discover something which leads to the killer, who is already waiting for them. As I indicated earlier, the reveal isn’t much. But I was captivated by the search and the characters interactions kept me engaged. 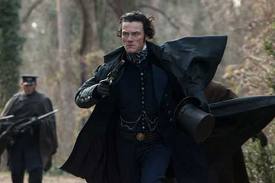 What about the direction by James McTeague? He certainly aimed to create the right atmosphere for this film. I’m a sucker for these period piece horror films, as my love of “The Wolfman (2010)” and “The Woman in Black” can attest to. Horror works best in the age without cell phones and if you’re going to do it, you might as well have the streets drenched in fog. There is a lot of green screen work and CGI, but the bone chilling atmosphere still managed to creep through. I love the spooky streets, the menacing buildings, the heavy ambiance and that lovely fog. McTeigue uses all sorts of diverse and interesting set pieces. One chase scene takes play in fog filled daylight, another on a stage, another in a catacomb of tunnels and sometimes he just stays in a coffin (very claustrophobic). He gives the film a visual energy which matches the intensity of the script. I’ve always suspected that McTeigue was a puppet director for the Wachowski Brothers, but since their names were nowhere on this movie, I have to presume that he has more talent than I thought. One scene that stood out to me is when two characters are talking in a room and lightning flashes, revealing that the killer is watching them from outside. Spooky! The “V For Vendetta” influences are a little distracting, but not too much.

So is “The Raven” perfect? No. In some areas it’s silly and in others it’s cliched, but it did a wonderful job at creating characters whose personalities and relationships intrigued me. The characters breath life into the tired narrative and Poe himself was a captivating lead. The direction is stylish and suspenseful, while the ending did a great job at blending fiction with reality. I thought it was a fairly riveting horror-thriller, which puts me at odds with the bulk of the critics out there. The general audiences were kinder to the movie than the critics were, so I hope it eventually finds its audience.

Overall: “The Raven” is an underrated and sometimes superb horror-thriller. I’d say it’s worth watching, if not in the theaters than at least on DVD.