“The Raid: Redemption” has been getting a lot of buzz among us martial arts fans as of late, apparently enough to earn a wide release. I had heard of it before, when it was just referred to as “The Raid”, although I failed to make a connection. It comes to us from the guys who made “Merantau”, a flawed but impressive film in its own right. “Merantau” showcased some spectacular martial arts choreography, but was rather clunky when it tried to be dramatic, tragic or funny. “The Raid” has no ambitions to be anything but the most vicious, badass martial arts film that you’ve ever seen. So naturally, it was awesome. 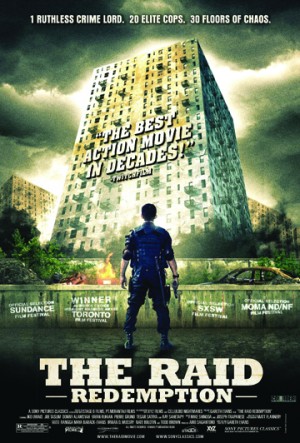 Tama (Ray Sahetapy) is a violent and notorious drug-lord who lives in a massive apartment complex, surviving by renting out rooms to other criminals, some being the most violent the underworld has to offer. A special forces team, which includes a skilled martial artist named Rama (Iko Uwais), are ordered to infiltrate the apartment and bring Tama to justice. At first, everything goes down smoothly as the team arrests one criminal after another. But when their presence becomes known, they find themselves in the fight of their lives. Do they stand a chance?

The first thing you need to know about “The Raid: Redemption” is that there is no real plot. It’s more of a premise that only exists for action. It should also be noted that there’s no real character development and the characterizations are paper thin at best. If you desire any kind of substance within the story with your martial arts movie, then you should probably watch “Fearless” or “Little Big Soldier” again. Even “Merantau” deserves some credit for at least trying to be the fuller cinematic experience by fleshing out its story, characters, relationships, etc. But it’s as if writer/director Gareth Evans read my review of that film (obviously he didn’t) and took my complaints to heart. “The Raid: Redemption” lacks the scope of its predecessor, but it means its focus has narrowed. It wants to be a hardcore action film FOR action fans and doesn’t let any pretenses get in its way. But I also believe enjoying the movie comes down to whether or not you can appreciate this. The reviews mean nothing if your sensibilities are more akin to Roger Ebert’s.

The first half of “The Raid” is more about gun fights, tactics, explosions and all around chaos. As someone who desires more fighting, this could’ve bored me but it didn’t. The director balances the pacing nicely by relying on suspenseful build up, smart planning from both sides and wonderfully framed action sequences. The camera is a little shaky, but only to disorient us a little. It never becomes stifling or nauseating. The director occasionally even manages to go artsy on us again, but is less showy about it. The scene where gunfire lights the spiral stairway, revealing the many shadows of their enemies is almost chilling. There might’ve been little actual martial arts during the first half, but it at least delivers crisp, edgy intense and exciting action scenes that never seem to stop. One trait that might be overlooked is that both sides showcase some intelligent strategies, so it’s not just everyone shooting at each other. 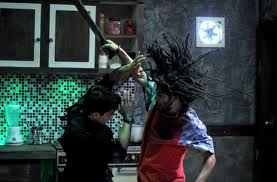 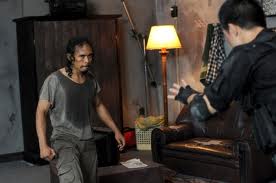 Also like “Merantau”, the choreography only seems to get better after each fight. Silat is used once again (it’s probably going to replace Muy Thai as the hot combat art of cinema), although this time they seem to ground it more in reality. The techniques are less flashy, but instead rely on believable quickness and brutality. The punches and kicks always seem to barely miss or when they connect, it looks like they really hurt. The skills used are both creative and dangerous looking. There’s a healthy use of props, knives and stunts. But what will stand out the most is the graphic violence. It is so seamless that at times, I had to wonder how they pulled some of the gore effects off. The fist cuffs are all breathtaking, being brutal and smooth, with loads of diversity so they never get old. It certainly is in the level of “Ong Bak” and “Ong Bak 2” when it comes to its martial arts delivery and once the fights start, they also never seem to stop. Thank God Gareth Evans opts to use wide and medium shots for the bulk of the fights, so everything is caught on camera without problem. But the few close/hand held shots used somehow boosts the action. It’s nice when excellent choreographer is combined with excellent direction.

I do wish to make a point that there are obviously breaks between the action sequences, but that’s so the movie never becomes exhausting. I thought this was perfectly paced, but are there problems? Honestly, my only complaint is that the protagonists are sort of dull (although I liked the commander). Iko Uwais is great as an on-screen martial artist, but he doesn’t get a lot of opportunities to showcase any kind of acting talent or personality. The villains, however, are a lot of fun because they get to actually ‘act’. Otherwise, I have no real complaints. The lack of plot, characters, etc is only a criticism if you wanted any of that here. Sure, “Ong Bak” and the genre films that CAN have this stuff while being action packed deserve more respect than “The Raid”. But it wasn’t meant to be a well rounded picture, so I didn’t judge it as such. It was meant to be full of awesome violence, explosions, gun fights, fist fights and jaw dropping stunts. As such, it’s freaking amazing.

Not sure who exactly was being redeemed though…

Overall: “The Raid: Redemption” is a must see for fans of martial arts movies. It’s a great example of its kind.