“Open Water 2: Adrift” apparently was written as an original story, but someone decided to turn it into a sequel to the polarizing “Open Water” in order to cash in on its success. I’d say this usually spells failure but it seems like I’ve been having a fair amount of luck with converted sequels as of late. “Open Water 2” is a flawed movie, but I honestly thought it was startlingly effective. It reminded me that both of these films relied almost exclusively on their emotional impact upon the viewer, so you can’t just judge either of them as good or bad. I thought “Open Water 2” was a far more rewarding experience than the first film and it doesn’t even have sharks! 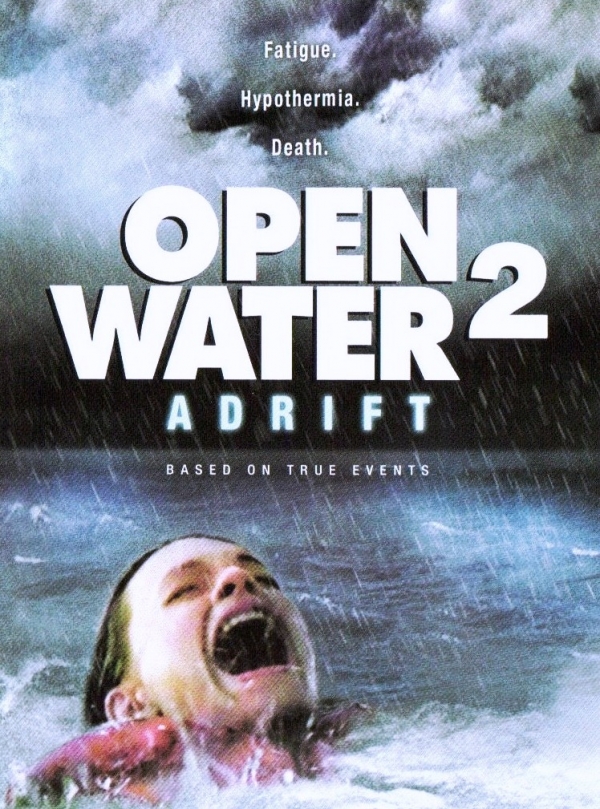 Plot: Amy (Susan May Pratt) and James (Richard Speight Jr) decide to bring their infant child to a reunion with old friends and flames, primarily to celebrate the birthday of Zach (Niklaus Lange). Dan (Eric Dane), the wealthy but reckless member of their group, takes them out on his yacht to party. This puts Amy on edge because she’s afraid of the water, but everything goes well until a prank-gone-wrong leaves everyone in the water…and they forgot to lower the ladder. So now they’re stuck in the ocean with the infant still on board. Now what!?

Despite not being written as a follow-up to “Open Water“, it does feel like a spiritual sequel to it. Both movies deal with the same themes, primarily nature being an oppressive bitch who wants to kill you and both deal with the psychological impact on its characters. To me, this is what the first film should have been, so I’ll probably be comparing the two a lot. Hans Horn’s direction is similar to Chris Kentz’ in that he relies primarily on the intensity of the situation to keep us on edge. However, I felt that Horn did a better job capturing the panic and emotional breakdowns the cast endured. On the flip side, Kentz was much more experimental and his film was more visually interesting. It comes down to which side you preferred.

The first film made a point to make its characters into real people instead of movie caricatures. The actors did an adequate job at that and they were the anchor to the film, representing whether or not it succeeded for the individual watcher. With “Open Water 2“, they begin as slasher cliches and honestly, they grew on my nerves fast. The writer bloats their characterizations with thin love stories and some sexual tension between Amy and Dan. Yet as the movie progresses, I began to really feel for them. They ceased being irritating cliches and become frightened human beings. When they do something stupid- and yes, they often do retarded things- it was something I felt a real person could easily do. The only time I felt it was poor writing was when a male climbs up a rope made of swim suits. Common sense suggests that the strongest female should. I respect that they gave each of the characters a good side and a bad side. Dan is a smug, jerk who gets them into trouble. But he also realizes how badly he messed up and often tries to make up for it. I thought the actors nailed their roles and eventually I ceased wishing for their deaths. 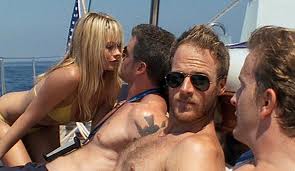 But the primary reason I prefer “Open Water 2” over its predecessor is that…shit actually happens. In the first film, the characters didn’t do anything to fight the situation because they couldn’t. They just floated around, enduring whatever the Ocean threw at them. With this film, the characters are constantly trying to get back on the yacht. They think up some clever ideas and act on them. But the movie also knows when to slow down and let the dread creep up on us (and them). It made for a much more engaging watch, tightening the pace while not moving too quickly.

The lack of sharks is pretty glaring, as that was one of the main gimmicks of the first films. Make no mistake, this movie is about its cast fighting off the cold, the weather, fatigue and their growing hostilities towards one another. There are no sharks, although the fear of sharks is there and at one point, a girl claims to have seen a shark. Perhaps “Open Water 2” lacked the budget or maybe they just didn’t need any sharks. I do wish it wouldn’t tease us with those “Jaws“-ish underwater shots though. You’re a tease, movie! A TEASE! Regardless, I was compelled by the situation and the narrative, so I forgave the movie for this. 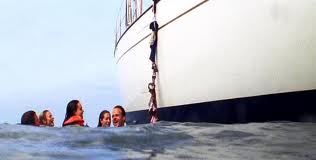 “Open Water 2” accomplished what the first film didn’t, but even that is a very subjective claim. I thought the characters were more engaging and they actually did stuff instead of just floating around. I thought the script was tighter too. But many have complained about the characters dumb decisions, so obviously they didn’t care and many viewers might prefer the style of the previous film. It’s all very subjective but I have respect for both movies. They were daring, unique and bold. They refused to cater to trends and are not meant to be critiqued like normal films. They have to be experienced, because either you will like them or you won’t. I didn’t care for the 2003 film, but I don’t regret watching it and it lead me to this impressive sequel.

Nudity: Rated R worthy. At one point, almost everyone gets naked, but you see more male nudity than female nudity.

Overall: “Open Water 2” is worth watching if you liked the first one, or maybe even if you don’t. Just don’t expect any sharks.