“Open Water” is based on a very interesting but tragic real life story that ‘almost’ sounds like it would work on film. After all, the thought of a nice, young couple being stranded in the middle of the ocean sounds intriguing, especially when you throw sharks into the mix. But while I watched the movie, I realized that the concept doesn’t leave a whole lot of room for actual material. How can you make a compelling movie about a couple floating around in the water? I guess it can be done, but it requires master filmmakers and while the crew present have nothing to be ashamed about, they are not masters of their craft.

(Written and Directed by Chris Kentz)

Plot: Susan (Blanchard Ryan) and Daniel (Daniel Drive) is a married couple whose relationship has probably seen better days. But they hope they can mend their problems by taking a lavish vacation in the Caribbean. Everything goes well until they decide to go on a Scuba Diving trip. A miscount results with the boat accidentally leaving them behind. They try to remain calm and collected, but the boat doesn’t return. Then the sharks arrive, although the movie is more about the people than it is about the sharks attacking. I figured you should know that.

The funny thing about reviewing “Open Water” is that a lot of what I have to say cannot be considered ‘good’ or ‘bad’, although that might depend on the reader. Other points might be neutral in quality, but can lead to positive or negative issues. The bulk of the movie follows our poor protagonists, so we begin to feel their isolation and growing terror. So that lead to a good thing. But as one would expect, we pretty much spend the bulk of the movie watching them float around in the water. That is kind of boring, so that lead to a bad thing. The film is shot in Digital Video, which is a neutral point. What good came from this? It added to the ‘realism’ factor, making this look like a demented home movie (no, I’m not saying that this is a found footage film). The bad? It made the movie look aesthetically cheap and this blurred the actors faces a bit too much in some shots.

But what can I say really stood out?

To me, “Open Water” only fails in that I never felt it was good enough. There’s nothing about this movie that I would call terrible. In fact, everything is ‘okay’, at the absolute least. But I was generally disinterested. I can’t say I was bored. It was just as if the movie was…there, playing in front of me. It never really impacted me at all. Why is this? Well, there isn’t a whole lot that director Chris Kentz could’ve done with the camera. Adding more action would’ve dumbed down the film. Adding more terrifying moments with the sharks, jellyfish, etc would’ve made things redundant. Adding more hostility between the protagonists would’ve gotten annoying. Adding scenes on land would’ve taken away from the dramatic tension and adding more dramatic tension might’ve made the movie bloated and dull. 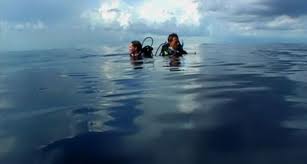 So he has to rely on the actors, which is possibly what kept me disengaged throughout the bulk of the film. The actors are acceptable. If this was a normal horror film, I would’ve even considered them impressive. But I don’t believe they had the experience or charisma to carry a movie on their own. “Buried” went for a similar approach and that worked because I always knew what was going on in its protagonists head. His terror became my terror, so I loved it. But I never really felt I knew what was going on in everyone’s mind. This is especially glaring with the female when she does “something” near the end. Her face is blank, devoid of emotion and it makes her decision seemed forced. To be fair to the actors, I think Chris Kentz’ inexperience might be the true culprit, although we’ll never really know until any of them make something ground breaking (they haven’t).

It’s sad because it’s not like his direction is bad. In fact, I’d say Kentz certainly has talent. Much like “Silent House“, it’s less the actual direction and more how the story unfolded. Since the film is meant to be psychological, it comes down to the characters reactions to the horrors. But he favors medium shots over everything, so any nuances the actors could’ve built for their characters would be nearly impossible to pick up, especially with that DV style of film-making. We need more close-ups, dammit! The wide shots are there, but they are only occasionally effective. A lot of the time I was distracted by how the audio seemed so disproportionate to the visuals whenever someone would speak in a wide shot. Yet the script might’ve done the most damage. We see our protagonists fine one moment, hostile towards each-other in the next, and then they are fine again. Perhaps that happens in reality, but this is cinema. To me, it made their actions less believable because large chunks of their development seems missing. As things become worse, we should learn who these people are through their actions as they become more scared. But there isn’t enough time to flesh this out, so the characterizations become choppy.

This meant that I was never able to invest myself in the film. Kentz knows that developing characters is good, he just isn’t sure how to pull it off. Luckily, I am in the minority here. Many people love this movie and honestly, at least I can respect it. The dialogue is stellar, the acting is acceptable and the screenplay- while needing to be better- is still a cut above most of its ilk. The nice little touches Kentz delivers as a director struck a cord too. I love it when the camera briefly takes a dip into the water, giving us glimpses of the sharks. I love how it gives us a taste by quickly cutting to what’s going on underneath the surface of the ocean. But it never lingers too long. The shots of the sky, birds, etc are pretty moving and the music is rather haunting.

“Open Water” relies on its realism and this is amplified by the use of real sharks. They do a good job at this, but real isn’t always interesting and I was just never that interested. I was never angry, annoyed or even totally bored. But I was never excited, on the edge of my seat or terrified either. It is a movie that relies on its effect on you and hopefully I explained why it just didn’t work on me. A story likes this requires masterful and experienced filmmakers, which “Open Water” did not have. However, it works as a decent stepping stone for the talent involved, so it’s not an utter failure either.

Violence: Mostly left to the imagination.

Nudity: Whoa, Blanchard Ryan gets super naked for no reason, but I’m not complaining.

Overall: If you like these movies, “Open Water” is worth watching but I have to warn you. It will either bore you or unnerve you, so keep your expectations low just in case.