If you’re even vaguely familiar with my reviews, you should know about my love-hate relationship with Steven Seagal, the man with iron double chins. When you think about it though, even his older movies weren’t so hot. “Above the Law” and “Marked for Death” were full of unnecessary subplots and “Hard to Kill” (based on what I remember) had some awkward tone issues as well as uneven pacing. Yet since Steven Seagal himself was so cool, he redeemed these films until his coolness began to drown in an ocean of blubber. “Out for Justice” isn’t any better than those films, technically, yet it also one of my favorite Seagal movies. 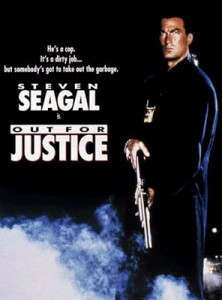 Plot: A police officer is out with his family when a drugged up gangster named Richie (William Forsythe) viciously murders him. Why he did so is the focal point of the mystery, but unfortunately for him, the cop was the partner of Gino (Steven Seagal). Gino was raised on the streets and is friendly with the local Mob, but he also happens to be a dedicated cop. When he discovers what happened, he hunts for Richie relentlessly, determined to have his revenge.

Like its predecessors, “Out for Justice” has a bit too much going on. The pointless subplots include: Gino’s estranged wife, his son, an abandoned puppy, the Mafia connection, his relationship with Richie’s family, etc. Still, it does manage to stick closer to the actual plot than his previous films and the Mafia bit is kind of cool. Why is all of this there? It’s just to see the different sides of Seagal. We see Seagal angry and vicious, but the bits with his son show off his tender side and we get to see him monologue more when he’s with his Mafia buddies. Seagal’s performance isn’t perfect and his accent sounds a bit odd, but this was back when he had fire in his delivery. He had charisma, presence and attitude. As expected, this is the films main strength and it lives or dies based on what you think about him.

But I think I liked “Out for Justice” more than his previous films because of the directors execution. The fight scenes are crisp and intense, as was typical of Seagal at the time. Aikido, once its novelty wore off, ceased being fascinating on screen. But it’s Seagal’s attitude and the grisly violence that makes it work. The director certainly went out of his way to make a vicious, graphically violent movie. My favorite scene is when a guy tries to use a blade against Seagal but only ends up burying it in his own knee. Besides probably being something that would happen in real life, it’s those darkly humorous bits of violence that gives the movie character  It’s brutal fun and Seagal’s ferocity makes it hit home. The film is also full of slick car chases, gruesome gun fights and many shots of Seagal breaking bones and busting faces. Violence and Seagal go hand to hand and the director makes this work. 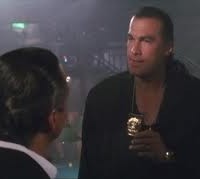 One thing that’s interesting, but also disappointing, is that the film draws a lot of parallels to Gino and Richie. Both are vicious and will hurt you in order to get their revenge. Seagal’s actions often are NOT legal as he beats up people who don’t really deserve it. I wish they played this up more, but the movie itself never seems to condemn Seagal for his actions. Also, I loved William Forsythe in this movie. He’s over-the-top but VERY intimidating and fun to watch. I wish there were more scenes between the two and the final fight is a bit of a letdown. It’s cringe inducing, but Seagal wins too easily. Oddly, I watched a little bit of “Exit Wounds” right before this and I think that movie is the first where Seagal actually meets his match and technically loses. It’s surreal, as that movie has fat Seagal doing crazy flips and stuff via wire work. Richie is one of the cooler Seagal villains, so he should’ve kicked his ass a little bit.

So “Out for Justice”, like the other films Seagal did at the time, is a relatively mediocre movie that relies on the awesomeness of Seagal. Unlike the other films, it somehow makes its loose narrative work thanks to the directors hardcore approach to the material. It’s a pretty badass movie and Steven Seagal would ultimately end up finally reaching the A-list action star level with “Under Siege”, which would top this as Seagal’s best movie. Sadly, his ego spiraled out of control and his career went down with it. Still, “Out for Justice” is a cool 80’s style actioner (that happened to be release in 1991) and Seagal was a cool action star at the time. A good example of the genre.

Nudity: There is some, but it’s not always pleasant.

Overall: You’ve probably watched “Out for Justice” if you’re a Seagal fan. But if it has somehow eluded you or are interested in seeing a movie made during his more respectable days, check it out. Hell, if you just like 80’s style actioners and haven’t seen this, it’s worth a look.