Imagine the old wet streets of London, complete eerie fog and the echoing of horse shoes on cobblestone, masking the presence of a sadistic menace. It’s Jack the Ripper and he has struck again. The police are baffled. How did someone butcher their victim in such a condensed area like Whitechapel and not get caught? In reality, Jack the Ripper was never captured or even identified. “Murder by Decree” answers the question of if the Ripper would’ve evaded the law had Sherlock Holmes taken the case. If that isn’t awesome enough, what if the movie in question decided to be a horror film directed by the man who brought us the creepy “Black Christmas”? If that’s not the best idea conceived by man, I don’t know what is. 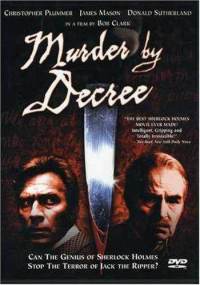 Plot: Jack the Ripper plagues the streets of England, brutally butchering prostitutes in the dark of night. The police can’t seem to catch him, much to everyone’s confusion. The case initially does not interest Sherlock Holmes (Christopher Plummer), the eccentric private detective who only takes cases that intrigue him. But soon, he becomes involved and finds himself investigating perhaps his most complicated mystery yet. Together with his old and trusty friend, Dr. Watson (James Mason), they work to solve this increasingly convoluted enigma.

I loved “Murder by Decree” simply because it successfully combines Sherlock Holmes with a horror movie. I was a diligent reader of the Sherlock Holmes stories and found them fascinating. Whether the stories were small and simple or vast and complicated, they always compelled me because of the finer points of the character himself. Holmes is an eccentric, full of many nuances and his chemistry with Dr. Watson kept all of the stories engaging. This film has all of that. Holmes has all the eccentricities that we’d want from him and his chemistry with Watson is bang on.

They complete each other and their witty, crisply written dialogue is top notch. Christopher Plummer and James Mason seem born to play these roles, making it a shame they would never do so again. Plummer in particular brings a warmth to Holmes rarely captured on film. He’s usually aloof, but it becomes apparent that Plummer’s Holmes is becoming more than intellectually involved in the case. Throughout the feature, I felt “Murder by Decree” perfectly captured the essence of Sir Doyle’s characters. But it also expands on them, which is always nice. 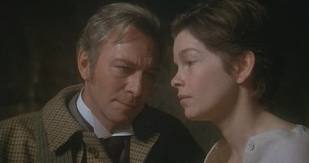 But we’ve seen plenty of solid adaptations of Sherlock Holmes that also perfectly nail the characters. What we haven’t- or at least I haven’t- seen is Holmes and Watson participating in a creepy horror film. The night scenes are drenched with fog, the buildings and establishments reek of menace and the score is nail biting. At one point, I could’ve sworn the “Jaws” music starts to play during the Ripper’s prowl. Bob Clark at times seems to go all “Black Christmas” on our asses with his use of build up, suspicious silence and plenty of unsettling close-ups on the killers animalistic eyes. At times, Clark even manages to evoke a good jolt out of me without resorting to lame boo scares. One of the most startling scenes is when Holmes stumbles upon one of the real life murders in process. It’s nowhere near as grotesque as the real life incident (primarily because it’s mostly left to the imagination), but it got to me anyway. A nice idea that Clark exploits is that during the night, the interior scenes are comfortable lit whereas the exterior scenes are bleak and grim. It was a nice contrast and made for a fuller experience.

However, the story does have some notable flaws. Actually, it’s not really the story itself, it’s how it plays out. I felt that the addition of a spiritual medium (played by Donald Sutherland) was sort of a cheat as it undermined Holmes’ investigation. In fact, I did not like how the film spends so much time with so many characters, but they never become suspects and the killer is predictably someone we had never seen before. To me, all of these characters should’ve been the suspects and one of them should’ve been the killer. It felt like the story was throwing its weight in the wrong direction, keeping it from the perfection it deserved. There’s even a subplot involving revolutionaries that only seems to be there for…actually, I don’t know why it was there. Perhaps the director was making a statement? I’m aware that this was closely based on a book, which presents a popularized but mostly disputed theory about Jack the Ripper. But THAT element did not blend well with Sherlock Holmes. I also believe the ending made the same mistake “Psycho” did. It spends too much time explaining the obvious during the last 15 minutes.

Still, I forgave the flimsy story because I adored its atmosphere. The old England setting makes a perfect location for a horror film and damn it, horror movies need to use thick fog once again. It makes my skin crawl when done right and director Bob Clark did it right. Clark deserves a lot of credit for making an unsettling and spooky movie. But the writer (and actors) deserve credit for making this a Sherlock Holmes movie at heart, recreating everything I love about the characters. Everyone deserves even more credit for focusing on how the case is effecting Holmes emotionally. All of this comes together to make a movie that I cared for and enjoyed, even if the story is very flawed.

Nudity: None, but prostitutes act like prostitutes. I’m not entirely sure I bought the films claim that Watson is a ladies man either, lol.

Overall: “Murder by Decree” is successful as a Sherlock Homes/horror movie, so why wouldn’t I love it? If that intrigues you, then give it a look!