I firmly believe that enjoying a movie comes down to a balance between its objective quality and our subjective response to the film, with the percentage differing from person to person and sometimes movie to movie. Prior to watching “Kwaidan”, I was in a sour mood due to some technical difficulties surrounding my latest episode of “Critiquing the Critics”. It was ruining my entire week and I wanted to get my mind off of it. In retrospect, perhaps watching “Kwaidan” during this time was a mistake. I was not in the right state of mind to deal with something this methodically slow, which is a shame because the concept of a ‘samurai ghost story’ really intrigues me. Did all of this effect my enjoyment of “Kwaidan”? Possibly, as I was utterly bored while watching it. 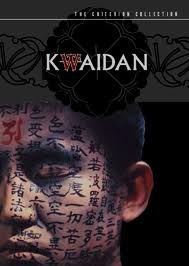 Plot: “Kwaidan” is an anthology, complete with four different ghost stories that take place in the age of the samurai. For this review, I’ll discuss each story individually.

Kurokami (Black Hair)– A young, foolish samurai (Rentaro Mikuni) abandons his poor wife (Michiyo Aratama) in order to marry up so he can acquire a higher post. Unfortunately, his second wife (Misako Watanabe) is rather callous, so he begins to miss the wife that he left. Eventually his marriage dissolves so he decides to return to his true love, but a twist is coming and it’s actually pretty easy to figure out.

Here is the best way to sum up “Black Hair“: People lethargically walk in silence, captured by wide shots. Sometimes there will be an actual interaction and sometimes a strange noise would jolt me out of my boredom. The film looks good, showcasing cool production design, sharp cinematography, inventive editing and strange sounds. But I thought it was agonizingly sluggish. This would’ve been acceptable if I felt this build up felt organic to the story, but it wasn’t. The big ‘reveal’ at the end is part nonsensical, part predictable and all sorts of disappointing.

Yuki-Onna (The Woman in the Snow)– Nokichi (Tatsuya Nakadai) is a young woodsman whose life nearly ends during a snowstorm. He is spared from death literally by some sort of goddess of the snow (Keiko Kishi), who warns him that if he ever tells anyone of her, she would kill him for sure. Sometime later, he meets a young woman and marries her, but the young woman looks suspiciously like the snow maiden.

The ending, once again, is obvious and the pacing is slow. However, I did enjoy the expressionistic, colorful sets and the snow provides a genuinely chilling (no pun intended) atmosphere. Furthermore, there’s a lot more emotion in this segment. Tatsuya Nakadai delivers a very ‘warm’ performance, in contrast to the cold location. The gorgeous, haunting and surreal photography mixed in with the firm characterizations made me care. This is easily the best segment of the anthology.

Miminashi Hôichi no hanashi (Hoichi the Earless)– Hoichi (Katsuo Nakamura) is a blind Monk who is new to his monastery. When a Samurai Warrior (Tetsuro Tamba) approaches him with an offer to play the biwa for his Lord, Hoichi accepts but soon realizes that the story is also rather predictable.

Oi, the only time this kind of slow burn suspense works is when it’s leading up to something. But so far, I accurately predicted EVERYTHING this movie threw at me. Well, I guess I was surprised during the first story when a wig attacked a dude, but that was just stupid. Obviously the bulk of viewers disagrees with me and I guess this style could also just be used when providing a very atmospheric movie. But it wasn’t good enough to make me interested. I’ll give the movie this, it has the most creative and bizarre cinematography and sometimes it is rather creepy. But it also seems to be longer than the last two segments and is twice as sleep inducing. I will never know why they felt the need to tell the damn backstory twice. So much time is spent talking about shit we already know. It’s strange, as I love parts of it, but detest the rest.

Chawan no Naka (In a Cup of Tea)– Kannai (Ganemon Nakamura) is a Samurai who begins to see ghostly images within his tea. He throws it away, only to realize he’s upset a spirit (Noburu Nakaya) and his three retainers. As he is the only witness to their presence, his fellow warriors begin to think that he’s gone a little crazy. But is he going insane? Or is he really being haunted? This is all apparently a story written by a mysterious author.

I was hoping that “Kwaidan” would go out on a stronger note, but this is in some ways the weakest of the stories, even if I prefer it over “Black Hair“. Of all the films, this one combines the style and tone of a real Samurai film with a ghost story. Kannai is shown to be skilled with the sword and other weapons with the actor believably delivering his blows. Something about him was more interesting than the previous protagonists. The sets, costumes and styles of acting are understated and low key compared to the previous stories, making the ghosts presence more noticeable. While some moments did work on me, it leads up to a very weak pay-off. It felt like they ran out of money, so just had to stop it, making the whole segment seem pointless. The whole author narrative device was unnecessary as well.

I guess it’s inevitable that certain fanboys will look upon my review with disdain, although I don’t see why. Masaki Kobayashi created an experimental, avant-garde art film. It is beautifully filmed and at the very least, I’ve never seen anything like it. But as with most ‘art’, it’s not about how good it is, it’s how it effects ‘you’. It bored me, but it is possible that subsequent viewings might work in the films favor. If anyone thinks that I’m one of those ADD viewers who worships the likes of Emmerich and Bay, it should be noted that I am a fan of many intentionally slow paced films. “Valhalla Rising“, Sergio Leone’s final three films, “The Godfather (1 and 2)” and most samurai films (which generally aren’t the fastest paced movies out there). But “Kwaidan” just didn’t connect with me. Yet I’d still say fans of old Japanese cinema should give it a look, because 98% of the viewers DID enjoy it a lot more than I did. Plus, it’s important and that is far more relevant than my opinions.

Violence: There are moments of cringe inducing maiming/killing.

Overall: Give “Kwaidan” a look, but if you aren’t fascinated by it, then you shall be put asleep by it.