“Hostel” is a controversial horror film, but not controversial in the way that most horror films are. It’s controversial because the horror fandom is split when it comes to its quality. Is it good? Is it bad? Is it a cult classic? Fans appreciated its originality, violence and tension. The detractors hated the tone, characters and probably were overreacting to the critics positive reaction to the film. I like “Hostel”, but I have no idea why the critics did because at its core, it’s just another splatter film.

I would’ve expected them to respond to this like they ended up responding to “Hostel 2”, which was more-or-less the same movie. “Hostel” isn’t a great horror film, but it was a step in the right direction for writer/director Eli Roth, whom I (used) to consider the modern day Wes Craven. 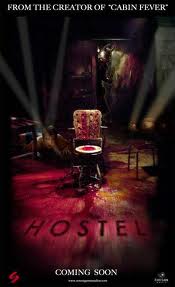 Plot: Josh (Derek Richardson), Paxton (Jay Hernandez), and Oli (Eythor Gudjonsson) are backpacking across Europe for hedonistic purposes. Josh and Paxton are Americans, whereas Oli is from Iceland. Circumstances result in them meeting a strange, Russian man who informs them of a Hostel in Slovakia where there are much more women than men and they are hot, horny and young. The trio decide to check it out but once there, they start vanishing one by one. It turns out people who check into the Hostel are captured and rich people pay to torture and kill them. Will any of them survive?

Since this is my first review of an Eli Roth movie (“The Last Exorcism” doesn’t count), let me first describe my feelings regarding him. “Cabin Fever”, his big debut, showed that Roth was an out of control genius. He had plenty of unique, creative ideas and unflagging energy, but he also could not sustain a tone and many other ideas were just downright moronic. Like Wes Craven, Roth needed someone to control which ideas made it into the film. Otherwise his movies- good or bad- would be utter messes. “Hostel” seemed like a step in the right direction. Maybe Roth learned from his mistakes or maybe producer Quentin Tarantino kept him in check. Regardless, the film gave me hope that Roth was improving. Unfortunately, this story does not end happily, but that’s reserved for “Hostel 2”. For this review, I will mostly be breaking down the film into three segments because it does sometimes feel like three different movies with three different goals.

The First 30 Minutes: Honestly, the half hour or so will leave you wondering if you accidentally put in a DVD copy of “Eurotrip”, because I believe every household as a copy of “Eurotrip”. I actually never saw that movie, but I remember the ‘molester on the train’ sequence from the trailer and cracked up when something surprisingly similar happened here. The first 30 minutes will make you think you’re watching a sex comedy (not counting the opening credits sequence). Is this good or bad? Well, the comedy is hit-and-miss. Sometimes I laughed, sometimes I rolled my eyes. It does a decent job at establishing the characters, although they don’t become fully likable until later on. But my favorite aspect of this act is I wasn’t sure whom would become the protagonist and the party-like atmosphere is rather catchy.

The Second 30 Minutes: I probably should remind you that I’m just guessing how long these segments were so don’t take them at face value. But this segment was my favorite as it captures the remaining characters isolation so perfectly. It’s all fun and games until someone you know goes missing. The film focuses on the lingering stares of suspicious locals, the Gothic scenery, and the dread filled cinematography. This is where I thought “Hostel” would be a great film. The first 30 minutes could be chalked up as build up, and remember when horror films actually had buildup? It pays that off with making you feel like your stuck in a foreign land where danger can lurk at any corner. It is very chilling and creepy and this segment was the most powerful in Roth’s entire career. But this greatness wouldn’t last with….

The Last 30 Minutes: The last 30 minutes aren’t bad. In fact, they’re pretty good. But this is where “Hostel” starts feeling awfully conventional. The first hour was unique, but the last 30 minutes reveal that the film is just another chase movie. Roth’s weaknesses start surfacing again (tone issues, the film transitioned from funny to frightening half way through the movie, so the occasional attempt at comic relief is out of place), but his strengths shine through as well. The gore is hardcore, but the film also leaves a lot to the imagination. Much of the torture is psychological and it works. The settings are impressive and Roth executes those locations with style. You feel like you’ve just entered hell, and our protagonist begins to show off his heroic side and it’s easy to root for him. Finally, the film resists the cliched ending that we expected (although “Hostel 2”…grrrr). It’s not that the last 30 minutes are anything short of good. I just felt that a splatter film invaded a claustrophobic thriller. But at least it was a good splatter film. 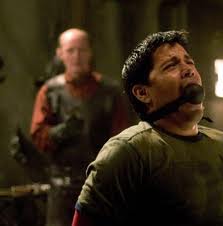 My belief is that Roth had a good idea but wasn’t entirely sure how to execute it. The finale was just what you’d expect out of any splatter film these days and that’s why the critics reaction confused me. I’m okay with a film just being a splatter fodder because I like splatter fodder. But Roth does do some shockingly good work here. He nailed the suspense, some of the transitions were highly creative (the ‘toe’ chopping) and the isolated atmosphere will make your skin crawl. The three segments of the movie are each good (maybe great; well, maybe not the first one) in their own right, but they just don’t always play well together. That’s why I don’t think “Hostel” is great, but at least it is really good.

Eli Roth became a fan favorite with this movie, but once again, it’s too bad that “Hostel 2” had to crush his career. Ironically, I’m not saying that “Hostel 2” is a bad film. But it showed us that Roth was a thin skinned little girl who either was selling out or wasn’t as creative as we thought. It’s been five years now and he still hasn’t directed anything, so I was wrong in presuming that he was the new Wes Craven. But “Hostel” fans have a movie they can cherish and while I’m not head over heels for it, I do think it’s a solid example of the genre.

Nudity: There’s a lot of this in the movie too, complete with loads of gratuitous sex.