One of my biggest problems with 1970’s Kung Fu features from Hong Kong is that they all sort of blend together. I’ve actually reviewed plenty of these movies and I rarely can remember the titles, much less the movies themselves. To add to my confusion, I’m pretty sure Cheng Cheh directed 90% of the kung fu output during this time and he seems determined to make the same movie over and over again. This is why I liked “The Heroic Ones”, which also happens to be directed by the same guy. It is a very flawed movie, but I can’t say I’ve ever seen anything quite like it. 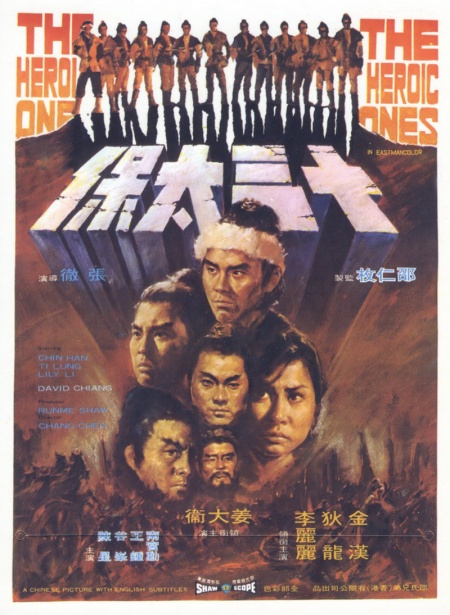 Plot: A Warlord (Feng Ku) has adopted thirteen warriors as both his sons and generals. Their skill and loyalty make him legendary, so he is assigned to take down a rebellion. The brothers, lead by Li Tsun Hsiao (David Chiang), are sent personally to throw the rebellion army in disarray. As it turns out, the rebellion is the least of their problems, as they must deal with treachery from another warlord and amongst themselves.

I’m not sure if “The Heroic Ones” was attempting at being Shakespearean or Japanese. The drama feels like it was itching in the direction of “King Lear”, but the action was more reminiscent of Japanese Cinema. I’m leaning towards the latter, but it’s possible that the director was influenced by both for this movie. When it comes to Shakespearean drama, it sadly is more of a failure than a success. We never really get to know any of these brothers, so the betrayals and tragedy we bear witness too fails to leave an indention. Furthermore, for it to matter, characters can’t be so one dimensional. The “evil” brothers are blandly evil, being willing to betray family and rape people for minimal reason from the beginning. So why should we really care?

Part of the problem might be its inclusion of pointless subplots, such as a love interest diversion that never goes anywhere. The plot seems to change consistently, at first it is about the brothers infiltrating the rebels. Then it becomes about taking on a treacherous warlord. Then it becomes about stopping the defector brothers. It ultimately means that no time is ever spent on developing anything and as much as I hate to say this, the kung fu might have eaten out of the drama. But it’s also possible that the screenwriter was intent on breaking rules and tearing down conventions. The way the love interest story was resolved, for example, is actually kind of startling. Hell, the Father looks like a villainous caricature yet he’s shown to be a noble dude. Soon, I realized I had at least partially misjudged the movie. There are…many surprises. Was it bad and lazy righting that just happened to serve the script? Or were the filmmakers being so bold that they challenged the classic narrative with this story. I’m not sure, but it at least partially redeemed my faults with the script. That doesn’t excuse the redundancy at times though. How many times do we need to see those Chinese dances and the characters partying? I also thought the brothers suddenly became really stupid near the end, but enough of my nitpicking!

The rest of the film is redeemed by the shear scale of the movie. Cheng Cheh has always been a competent director, but I’d rarely refer to him as ‘inspired’. “Heaven and Hell” was one of the few seemingly ambitious movies he’s made, and I suspect that drugs were involved with his ‘inspiration’. But “The Heroic Ones” soars above most of its ilk by having epic production values. The amazing set pieces, the costumes, the hundreds- if not thousands- of extras participating in jaw dropping battles. This movie looks amazing, like a true epic that just happened to come from Hong Kong. What’s more spectacular than the lavish settings is watching at least one of these settings burn down. Sure, at one point I suspect a model was used, but the rest of the sequence at least appears to be authentic. Either they really set it ablaze or they did a damn fine job tricking me into thinking it was real. The director is sure to whore out wide shots, giving the film the right scope. Long before CGI came around and revived the Hong Kong epic with movies like “Red Cliff”, “The Heroic Ones” did it with nothing but practical effects. I also noticed that Cheh got a little artistic on us, as a re-occurring theme was fire. This is easily one of Cheh’s stronger efforts as a director, both thematically and visually.

The choreography is nothing spectacular in itself, but what it lacks in style it makes up for it in spectacle. There is rarely a one on one fight. Instead it’s one on…one hundred? Swords, spears and other weapons are constantly flying around and it’s a shock that no one was killed on the set. There are some really good fight scenes all the same. Ti Lung has a minor role as one of the brothers who must defend his Father against hordes of enemies while the palace burns down around him. It’s stunning, partially because the fighting is surprisingly detailed compared to the rest of the movie and partially because…well, it looks like they’re doing this in a set that’s burning down. While the earlier combat sequences are a little stiff (keep an eye out for Bolo Yeung though), they seem to get better as time goes on to where I was pleased. There is quite a bit of action on hand too, which makes me even happier. So the fight choreography is acceptable, but its upstaged by what’s going on around it.

“The Heroic Ones” is certainly worth watching if you want to see a Kung Fu movie elevate itself beyond its meager genre. It’s got a big budget and Cheng Cheh uses that budget effectively. It has excellent cinematography, set design, and loads upon loads of ambition. But I believe my favorite aspect of this is how different it was. It has a daring story to tell and it’s not like anything I’ve seen before. With a genre where every movie looks and feels like every other movie within the genre, this is a huge revelation for me. It’s just a shame that the attempts at drama are very clumsy and the script is (possibly) confused about what it wants to be about. It keeps “The Heroic Ones” from greatness, but there is something…great (?) about it.

Nudity: None, but there is an attempted rape.

Overall: Go ahead and watch “The Heroic Ones” if you want to see a different, maybe even more respectable, kind of kung fu film.