You know, having reached the final (and most reviled) entry within the Hellraiser franchise, I realize that I am holding my own metaphorical Lament Configuration. Except instead of a puzzle box, it’s a DVD copy of “Hellraiser: Revelations”. Instead of opening it, I place it into my DVD player and instead of Pinhead and his cohorts appearing and ripping my flesh into pieces, I had to endure an awful movie. But much like Pinhead’s victims, deep down I wanted “Hellraiser: Revelations”. I wanted to satisfy some sadomasochistic urges, or at least the film equivalent of sadomasochism. I knew this would suck, yet it was my discovery that this film existed which inspired me to do “Hellraiser Month”. Clearly, deep down, I enjoy the torments of bad movies. 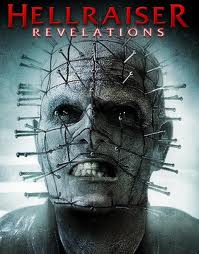 Steven (Nick Eversman) and Nico (Jay Gillespie) are two teenage buddies who decide to venture to Tijuana to live out their hedonistic desires. Unfortunately, what begins as a romp of sex and alcohol turns deadly when Nico (apparently) accidentally kills a hooker. This dampens their spirits until a vagrant (Daniel Buran) approaches them with the Lament Configuration. They open it, unleashing the demonic Pinhead (Stephan Smith Collins) and that was the last either have been seen. They had filmed the opening of the Lament Configuration, which had been turned over to their parents. Both of their families are devastated and we mostly follow them until Steven shows up, weak, delusional and covered in blood. From here, we learn exactly what happened while everyone realizes they are in grave danger.

Each of the crappy Hellraiser sequels left me with different emotions. “Hellraiser 3” left me amused, “Hellraiser 6” left me annoyed and the worst of the bunch, “Hellraiser 8”, left me fuming. When “Hellraiser 9” ended, I wasn’t amused, annoyed or angry. I was just…sad. This entry reveals Dimensions Films low opinions of its audience. The studio apparently realized they could lose the rights if a movie wasn’t made, so quickly churned this out. I could forgive that in concept, but why slash the budget from $2-5,000,000 (which the last three films had) to $300,000? Why couldn’t they throw more money in Doug Bradley’s way so he can play Pinhead one last time before he’s just too old to do the part anymore? They must’ve figured we’d see it anyway, so who cares about quality? It’s also tragic because the script actually was not bad.

I will stress though that “not bad” doesn’t necessarily mean it’s good. There are plenty of problems. I didn’t like how the film was structured. At first the film looks like it’s going to be the Hellraiser equivalent of “The Blair Witch Project” with its found footage style of film-making, but then shifts to the Hellraiser equivalent of “Cannibal Holocaust”, where characters are watching the found footage. It goes on for awhile before lazily discarding it, which makes me wish they didn’t even bother in the first place. I also wish they chose to focus either more on the family or the kids in Tijuana. Both were sort of compelling but they took away the momentum from each other. Then there’s the problem of this movie being littered with ONLY unlikable characters. Steven and Nico are annoying, their Mothers are rude, the sister is insensitive and the Dad’s turn out to be douchebags in different ways themselves. I know that this was intentional, but jackasses or not, I do want to root for them. At least Detective Thorne (“Hellraiser 5“) had a likable streak about him! These characters are just unpleasant to watch. There are some holes, like what happened to the cars? There are two possibilities, but neither really work. I didn’t like that they make the Vagrant attack a character (no reason too), I didn’t like some loose ends and of course, characters do stupid shit to drive the plot. Worse, many of their actions just didn’t feel natural. 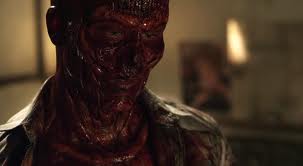 Hey, I made a point that the script wasn’t good, but it has a lot of potential and makes an effort to follow through with that potential. For one, I appreciated that they tried to return to the theme’s and concepts present in “Hellraiser” and “Hellbound: Hellraiser 2”. Pinhead is no longer a demon bent on world domination, but instead is a seeker of forbidden and deadly pleasures. I like that Pinhead remains in the background, but isn’t tacked on. His screen-time is limited, but he’s relevant to the plot. The story is more about what Nico and Steven ultimately do to escape his wrath while the family tries to piece it together. Furthermore, Tijuana is the perfect place for a Hellraiser setting. The place known for its cheap hookers, donkey shows and plenty of other morally decadent activities provides the right location for the Lament Configuration to be found. Startlingly, the dialogue isn’t silly or mundane, but it is overwritten. Pinhead is too articulate and while his line’s didn’t make me snicker, they did make me….blink. It felt like the writer was looking for the most flashy and complicated ways for Pinhead to say something. I respect the effort, but Doug Bradley’s Pinhead was effective (in the earlier films) for just saying a few memorable lines with gusto. This Pinhead is too talky, but I guess I’ll discuss him more when I move to the films acting. Really though, “Hellraiser 9” had a script that has a fairly engaging premise, acceptable dialogue and a narrative that is sometimes intense. It’s just too bad Dimensions Films didn’t believe in it and the director screwed it all up.

Okay, to be fair to the director, he didn’t have much to work with in terms of money. I am grateful that they had enough cash to deliver decent practical effects. The gore was a pleasant surprise, not looking too cheap or overly polished. But when it comes to building suspense, atmosphere or tension…He has his moments, I guess, but he generally fails at injecting anything into the proceedings. Because there’s no money, some scenes are glaringly cheap. I mainly refer to any sequence that requires an elaborate setting or set alteration. Pinhead’s liar at times looks like a shack that was decorated to be Gothic. Whenever Pinhead or the Cenobites (who look decent, by the way) show up, it’s always off-screen and we see the characters reactions. It just looked awkward to me and at times the direction DID make me giggle. I especially cracked up during Pinhead’s introduction. Pinhead does NOT look good with the found footage style and the camerawork just made that whole scene sort of clumsy and dumb. They should’ve tried to keep Pinhead out of the scenes where he wasn’t need. The random “cut to” shots of him were pointless and cheapened the intensity that should’ve come with him. But generally, the direction is flat and uninspired. 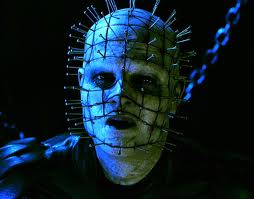 But he arguably fails the most when it comes to his actors. I have only seen one person before (Steven Brand as Ross Craven, he was the villain in “The Scorpion King”), but I believe everyone has talent because each of them can convey one side of the role very well. Brand, for example, did good as “the man in charge”, but when he sees someone’s face sliced off, his facial expression is noticeably devoid of emotion. Nick Eversman (the character Steven) is acceptable when he’s being weak and timid, but when he tries to evoke menace or is doing that “acting so nice that it’s suspicious” spiel, it’s so over-the-top to the point of being silly. I felt a lot of this could’ve been solved by the director telling Brand to emote a little more or Eversman to tone it down. Other examples are Sebastien Roberts (Peter, Nico’s Father), who does great as the suffering Father whose torn between wallowing in his guilt and moving on, but struggles whenever he has to yell (overacts). Or Tracy Fairaway (Emma, Steven’s sister), who does a stellar job until she tries to be sexy, which also just feels off. People underestimate how important the director is when it comes to actors. Sometimes they need actual direction. So I believe the actors and actresses have talent, but the director failed to use that talent to its fullest.

As for Stephan Smith Collins as Pinhead….I don’t know, he does the best he can but he just doesn’t feel right. He doesn’t give us a fresh take on the character (ie, Jackie Earle Haley as Freddy in “A Nightmare on Elm Street (2010)”, so it’s hard not to compare him to Doug Bradley. Yet he doesn’t bring shame to the role either. He delivers his lines with conviction and at least tries to be low key and chilling, but it’s just not the same. I was more annoyed with his look (was he wearing lipstick?), which bothered me more than his acting. While I became tired of Doug Bradley in the role, this movie made me realize that there can only be one Pinhead. Other actors can fill the role and do well, but Bradley made the role fit him too well. So Collins, you did the best you could. Bradley, I might’ve given you shit in the past, but that was more how you were used than anything. You will always be Pinhead to me.

So “Hellraiser: Revelations” was more of a missed opportunity than anything. It had a passable script, which was the first screenplay actually written as a Hellraiser film since “Hellraiser IV: Bloodline” and I thought it had some slick ideas that sort of worked. I believe it would’ve been good had the studio not tried to screw its fanbase over and instead increased the budget. I believe it would’ve been good if the director was just better. Sure, the script would have to go through another draft or two, but it could’ve…no, SHOULD’VE worked. But it didn’t and the end result was a bad movie that had no reason to be bad. Once again though, who is more at fault? “Hellraiser: Revelations” for sucking or myself for knowing how much “Hellraiser: Revelations” was going to suck. Now that I have seen the bottom of hell (for bad movies), have felt its metaphorical chains remove my flesh and heard the cinematic equivalent of Pinhead tell me how much I enjoy this and fail at life…I just shrug it all off and walk away. But before I leave for good, I turn back to my tormenters with a look that almost appears to be disappointment.

Violence: Yay, people get flesh removed again! It is pretty violent. In fact, I’d say it might even be one of the more grotesque entries in the franchise.

Nudity: There’s a lot of it, which was nice considering it came from some hotties. There are three sex scenes, all (or most) having nudity and there’s a strange incestuous makeout scene. I somehow doubt that Tijuana hookers are that sexy though!

Overall: “Hellraiser: Revelations” is a bad movie, even though the script was okay. But I didn’t hate it. Probably because I knew what I was getting into and maybe my expectations were just so low that it was hard to meet them. As I said, I left the movie sad, not angry. It could’ve actually been something…Too bad “Hellraiser Month” had to end on a downer.