“Hellraiser: Hellworld” is awful. Not awful in an amusing way like “Hellraiser 3”, nor was it a (somewhat respectable) misfire like “Hellraiser 6”. It is just bad. Every idea it produces backfires, either being an awful concept to begin with or it’s executed so poorly that they might as well have been lame ideas to begin with. I guess I have to respect that they tried to make it different than the previous films, but by different I mean they decided to make it like every other horror franchise that ever existed. It’s like the filmmakers took a good look at the franchise and determined that the Hellraiser films had become too conventionally unconventional, so the only way to remain unconventional was by becoming conventional itself….. 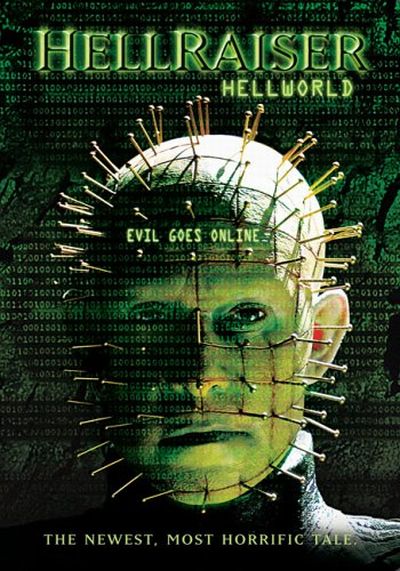 The film opens with some kid digging dirt, before letting out a pained shriek. We cut to his funeral and are introduced to his irritating and generic friends, one of whom is played by Henry Cavill (“Immortals”, soon to play Superman in Zack Snyder’s “Man of Steel”). We learn that this is a meta movie like “Wes Craven’s New Nightmare” in that the Hellraiser franchise is just a fictional franchise. Except instead of being a string of movies, it’s actually a popular video game called Hellworld. Anyway, two years later, the protagonists win an invitation to some sort of Hellworld convention where the most hardcore gamers go to party. It’s hosted by…well, he’s never referred to by name but he’s played by Lance Henriksen, so he’s probably the bad guy. Anyway, the house is filled with all sorts of morbid props (or are they real?) like dead babies, torture chamber devices, etc,etc and as they split up to explore/party, they find themselves being killed by Pinhead (Doug Bradley) and his cenobites.

The movie had all the elements to be tolerable. It has some ambitious twists, a passable budget and stellar actors, but it never knows how to use them. The characters are written so thinly and their dialogue is so poor that no one comes out of this looking good. Even Lance seems REALLY bored in this movie, as if he was on sleeping pills or some shit. The characters range from “bitchy” to “shallow” and I certainly didn’t care for them. Nor did the movie, apparently because when they die, hard rock music tends to play in the background and that usually signals that it’s supposed to be “AWESOME” when they’re killed gruesomely. On one hand, them dying made me smile, but the deaths themselves are rather bland for a Hellraiser film. I’m not even sure I can write a coherent review because everything is so ‘off’ that I would need to take you scene by scene to explain it.

First off, the game that’s supposed to be so popular looks REALLY boring and kind of dated, as if the filmmakers weren’t familiar with how video games work. The premise sort of brings “Stay Alive” to mind, presuming anyone actually remembers that movie, but at least the game in that film looked cool. Does solving the lament configuration online sound like an appealing use of time? Then we get to the party, where we see how sexy all of these hardcore gamers are. Granted, maybe I shouldn’t complain about that, as a bunch of fat, pasty people partying isn’t very appealing. Also, I didn’t like how the franchise shifted from adult oriented to stupid teenager oriented. In fact, maybe that’s what bothered me the most. 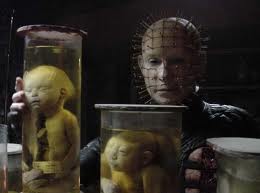 EVERY Hellraiser film, even the crappier ones, aimed to unsettle its viewers and absorb us into its atmosphere. Yes, this meant that the films were slower paced, but I was rarely bored with them. This one has a more rapid fire pace, but it dumbs down what the previous entries had established.It changes the structure into a standard slasher feature. It starts ripping off “Saw” with some of its kills and sadly, those are its best kills. Here, Pinhead’s murder weapon of choice is..a hatchet? A FUCKING HATCHET?!

It’s tone is all wrong too, probably because its so intent on catering to the younger crowd. Instead of being low key and spooky, “Hellworld” has rock music playing throughout and is just noisy. It just doesn’t fit. Pinhead deserves something Gothic. Watching Pinhead messing around with these teenagers is like watching an old dude party with youngsters, it’s awkward and he just can’t be more out of place. “Hellraiser” was always for adults, so I am justified in my annoyance. This of course kills any sense of suspense, foreboding, creepiness, ect. Eventually I really started to get bored. I suspect they wanted a brand new audience by appealing to the younger crowd who adores dumb slashers (it should be noted that I often DO enjoy these types of movies), but it’s at the cost of the true fans for the franchise. Actually, the director more-or-less confirmed that he wanted to do this with “Hellraiser 6” when he cut out most of connections with the earlier films. I hate to break it to you, but I doubt newbies to the franchise will begin with your crappy entries, dude. They probably will start at the beginning. 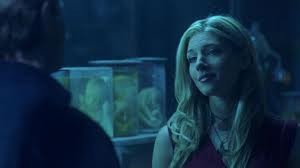 Finally, the script is just an utter mess. When the twist is revealed, it’s hard to not question why this or that happened. They spend too much time trying to explain it and it still felt contrived and nonsensical. Then the fucker just won’t end with fake ending after fake ending and I was just left with a question mark over my head. I can see what they were trying to do and had the writers been better, maybe it could’ve been pretty cool. But it just doesn’t work. There’s also a significant amount of padding that goes nowhere. When I say “rapid fire” pace I mean it throws gore or a “scare” our way pretty often, but because there is no reason for most of it, it takes away from the fun. Dare I say this is the horror equivalent of “Sucker Punch“?

It’s obvious the film was not written as a Hellraiser entry and it shows here more than ever. It’s just a generic slasher that confuses ambition with convolution and Pinhead felt out of place. The master of pain has no business with bratty teenagers who play video games. He doesn’t belong in a scene with rock playing in the background and he certainly SHOULD NOT BE FUCKING KILLING ANYBODY WITH WEAK ASS HATCHETS. The previous three entries might’ve come from spec scripts that have nothing to do with Pinhead, but they had the right premise and tone, so the conversion is mostly seamless. This proves you just can’t take ‘any’ script and make it a Hellraiser sequel. I apologize if it seems like I’m nitpicking like a fanboy, but everything about this movie makes me angry. It is easily the worst of the franchise.

Or is it? In my hands lies a lament configuration of my own, one that promises even more torment than the franchise has ever dished out. This puzzle box scares me, and it’s called “Hellraiser: Revelations”.

Nudity: There is a fair amount. More than usual, actually.

Overall: “Hellraiser VIII: Hellworld” blows, but if you’re a completest you shall watch it too. Because we like pain.