“Hellraiser V: Inferno” is probably the most polarizing entry in its franchise. Regardless of its final impact, there is no denying that no one expected a lot from it. Horror was in a decline and the failure of “Hellraiser IV: Bloodline” proved that while Pinhead had an audience, he wasn’t in league with Jason, Freddy or even Michael when it came to box office returns. But since money could still be made off of him, they chose to go the “Leprechaun” route and release the films direct-to-DVD. But instead of delivering a cheap(er) imitation of the previous films (like one would expect), “Hellraiser V” ended up being a tense, psychological thriller. It wasn’t anything like we had seen before in the franchise and that’s where opinions on this entry differ. Was the change in…everything…a good thing or a bad thing? 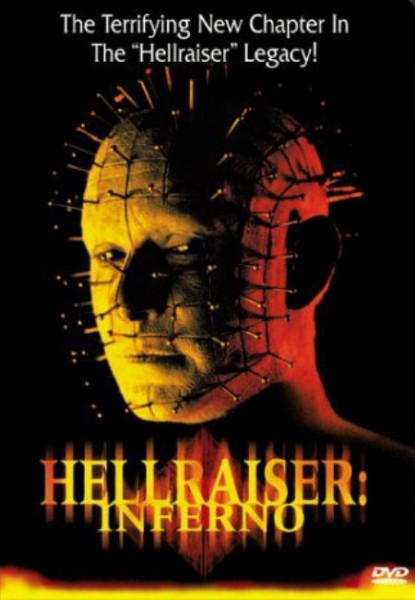 Plot: Detective Joseph Thorne (Craig Sheffer) is brilliant at his work, noticing the small details, which allows him to solve all sorts of puzzling crimes. But he has been corrupted. He cheats on his wife with hookers, snorts cocaine, beats up informants and he blackmails his partner to save his own skin. He justifies everything that he does by stating it’s a means to an end. His current case is solving a bizarre murder where an old acquaintance appears to have been ripped apart by hooks (uh oh). A puzzle box (uh oh) is found at the scene, which Thorne takes with him. When the box opens, he begins to become delusional, seeing demonic figures that wish him harm. But even worse, he seems to have caught the attention of a brutal killer, who murders the people around him while leaving a (living) childs’ finger at the scene. Can Thorne catch the killer and redeem himself?

The movie has a very intriguing back-story. Apparently the studio was too cheap to have a script written, so they instead took an already acquired script and wrote in Pinhead, therefore making it a Hellraiser movie. This seems like a bad idea and for many, it was a disaster. Detractors wanted to see flesh mangled by Pinhead, not some strange, psychological thriller where Pinhead shows up at the end for five minutes. I, however, felt the conversion was surprisingly well executed. While not perfect, the film showcases Pinhead’s ability to inflict psychological torment. By the end of the movie, I was left wondering who had to endure the most pain: the poor protagonist here or Pinhead’s previous victims? I still wonder. Pinheads’ usual style was getting stale, and I believe this film gave the franchise new life, even if it was only temporarily.

This is a very difficult movie to review because I either have too little or too much to say. So lets start with the films backbone: The protagonist. Thorne is a corrupt cop, but you can see (without being told) that he probably was once a good person who followed the straight line. But he’s been among the filth and crime of his city for so long, he lost focused about what was right and wrong. He crossed too many lines and no longer can even tell where those lines are, if he can even remember what they are. He justifies his actions as a means to an end. He just doesn’t hurt people for the sake of doing so. He uses violence and blackmail to get his way and does drugs/hookers so that he resists the urge to leave his family. Yet deep down, you also get the impression that he wants all of this. He wants to see how far he can fall before he crumbles and when the shit starts to hit the fan, you begin to realize that there’s a sick thrill to be found in his hunt for the engineer. But the film never portrays him as evil. He seems to have a reverence of children and his disgust with the torture of a child is obviously genuine. There is enough good in him that I wanted to see him redeem himself, but also never felt sorry for him. 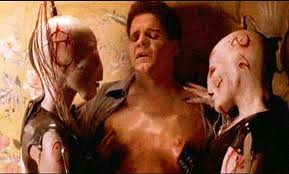 The story is compelling in a typical ‘cat vs mouse’ kind of way. We spend the movie learning about the Lament configuration (puzzle box), how far Thorne will go to catch a killer, how far the killer will go to torment Thorne and who this mysterious Engineer is. Eventually the film suggests that Thorne might be the killer and that he’s just insane. But the movie primarily just wants to drown you in its atmosphere. Red and orange colors appear everywhere, from the locations to the lighting, being symbolic for his metaphorical descent into hell. But when he actually visits hell, everything becomes green or white or black.

While more of a thriller than a horror, there are plenty of grotesque and spooky moments. The cenobites are sometimes poorly placed (the tattoo), but they are suitably creepy. The killer is probably the films best creature design and I’m pretty sure it inspired the dinner table monster from “Pan’s Labyrinth“. There will be moments of harsh violence, but it leaves a lot to the imagination, which made me cringe all the same. But amusingly, one of the films most unnerving moments is when Thorne is talking to the psychiatrist (James Remar) about the cenobites. The presence of evil feels thick and Thorne’s growing nervousness got under my skin. In fact, I’d say that’s part of what I loved about it. You just feel there is something cruel, ugly and menacing hiding beneath its surface, its eyes on Thorne (therefore us) and that continuously gave me the chills. This kind of suspense can backfire and bore you though, as I presume it did with the films detractors.

Nothing seems to be what it is. Just as Thorne has lost focus of the line between good and bad, soon we aren’t sure whether we’re watching reality or a nightmare unfold in front of us. We’re dragged along with Thorne through his suffering and feel everything he feels. Eventually the film descends into sheer madness (lol, I can’t help but think of the “I walked into madness for you” line from “Hellraiser III”). It becomes very abstract and nonsensical and any notions of reality are completely gone by the end of the movie. You will either laud it for its surrealism or loathe it for being incomprehensible. I understand and respect both sides, but I dug where it went.

Then Pinhead comes into play.

Everyone talks about how Freddy, Jason and Michael became less scary after each film, but they at least were menacing enough to keep my interest. Pinhead seems to have become more and more boring in each movie. He uses his normal voice this time around, which isn’t imposing at all, and the dialogue is just too heavy. It’s not groan inductively bad, but it’s very out of place and pretentious. Doug Bradley’s energy is also lacking and I was under the impression that by this point, he no longer cared about the character or the franchise. He probably just wanted the money. The director fails at making him terrifying as well. In fact, I don’t even think the director even wanted to make him scary again. When Pinhead shows up, it’s done with an awful effect and there’s no real fanfare or intensity about it. He’s just…there, and the movie doesn’t treat it as anything special. Personally, I suspect that someone (maybe the director) didn’t really want Pinhead to be there but was forced to include him. Pinhead’s sequences are just too uninspired and distracting and do not mix in with the rest of the film.

Could the conversion be at fault there? Presumably. But I think it could’ve worked if they just tried. There are other parts that don’t survive the conversion as well. That cowboy sequence was glaringly out of place and rather pointless. Furthermore, the film never explains a few things. You presume that everything is surrounding Thorne and it went into action as soon as he opened the box, but how do you explain the opening kill? Is Pinhead able to choose his victims before they open the box? Apparently so! But I’ll accept the bad because I adored the good.

As cheesy as this sounds, “Hellraiser 5” is riveting not because Pinhead shows up and does his thing, but because the protagonists journey is just so well executed. I felt everything he felt. I adored how the film uses its pain/pleasure theme (they FINALLY focus a little more on the pleasure part) and how it fits with said journey. When you think about it, “Hellraiser 5” is the horror equivalent of a film noir. There’s even a narration! To me, it brought creativity to a franchise that had quickly run out of steam. But many will despise it because there was not enough Pinhead. Although quite frankly, I think bitching about that is like bitching about Michael not being in “Halloween 3“. You’ve known this for years and there have been plenty of shitty sequels that contain the character since then. GET OVER IT! If you know and understand that this is not a traditional Hellraiser movie, I don’t see why you wouldn’t like it. It’s flawed, but it’s almost a masterpiece.

Violence: Rated R worthy. It has some gross moments, but isn’t as graphic as its predecessors.

Nudity: There is sex, but I dont recall any nudity.

Overall: “Hellraiser V: Inferno” is probably the only Hellraiser movie I’d recommend to viewers who are not familiar with the franchise. It’s a great, but vicious, psychological thriller.