“Hellraiser” month has begun! Why Hellraiser? Why March? My Birthday is March 10 and as a birthday present to myself, I’ve decided that every March I will exclusively watch everything that I wish to watch. The reason why “Hellraiser” gets to be the theme is it’s one of the few horror franchises that I haven’t fully explored. I pretty much stopped when they sent Pinhead to space and the rest of the films toiled in the hell known as ‘direct-to-DVD’. Much to my surprise, after that is when things started getting interesting for Pinhead. So I decided that it was time for me and Pinhead to get chummy again. Although granted, maybe starting off with “Hellraiser 3” was a bad idea.

Plot: The previous two movies established that not only does hell exist, but there is a puzzle cube that if ‘opened’, it unleashes Pinhead (Doug Bradley) and his Cenobites upon you for some torture time. Pinhead and his cohorts had been slain in the last film after regaining their humanity. However, a club owner named J.P Monroe (Kevin Bernhardt) comes across the statue he was trapped in (?) and buys it. Contrived writing causes Pinhead to escape and now he wants to destroy the world (!), and it’s up to a reporter (Terry Farrell) to stop him.

I actually do sympathize with “Hellraiser 3” on some levels. Most of the “Part 3″‘s had ideas and concepts to draw upon. There usually was an established story, with characters whom we expect to follow. Hell, “Friday the 13th part 3” and “A Nightmare on Elm Street Part 3” not only gave us what we wanted, but they ultimately became templates for later sequels to come. “Hellraiser” and “Hellraiser 2” had the same plot device (the cube), some of the same characters (including Pinhead) and the general same theme (pain/pleasure), but they had unique stories that could not really be emulated. All it had was the iconic villain Pinhead, who had previously repented before being killed off by a more dangerous (but temporary) villain. The only thing they could do was bring him back and make him the true antagonist (prior to this, it was other characters). This sadly, forces them to ret-con Pinhead’s entire existence, turning him from a searcher of forbidden pleasures to a demon.

It sounds like a good idea, but it backfires. Pinhead worked as a nice addition to the story, but as a main character he’s over-exposed. He talks too much and there is a lot of hammy mugging. He was far scarier in the shadows. I also don’t like how they change him from a seeker of forbidden pleasures to a demon who wishes to take over the world. At least they cxplain it, but it’s such a lame cliche. The Cenobites are even worse off. The design of the previous creatures alone, not to even mention the shadowy atmosphere that came with them, creeped me out as a child. But even though I had grown up with this one too, I could never recall what the Cenobites looked like. The make up effects aren’t bad, but the designs are never scary and at times they are just downright silly. One even spews out one-liners left and right. Yet this was what was hip at the time, so I blame the trend just as much as I do this movie. Plus, the film teaches us that if you’re going to be a bad movie, then at least be amusingly bad.

“Hellraiser 3” reminds us the importance of at least tolerable acting in a horror film. Some bloodbaths can survive incompetence here, but “Hellraiser 3” wants to be psychological and cerebral. The first hour of the movie is dedicated to people talking, Pinhead philosophizing and…well, people talking. There is the occasional kill, but mostly the film wants to flesh (haha, I made a pun) out its characters. This can be admirable, but the acting is awful. To be fair, there wasn’t much they could do with the dialogue. Every line is something absurd and cheesy, like “I just walked into madness for you”, so the actors had little to work with. But regardless, their performances are all awkward and clumsy. The only exception is Doug Bradley when he’s playing Captain Elliot Spencer. As Pinhead, he varies but at least continuously entertained me with his bizarre lines. In fact, the bad acting/dialogue ended up being the most enjoyable aspect this movie had to offer. I often laughed, or at least smiled.

The importance about all of this is some scenes could’ve been scary had the actors been able to convey the right emotions. Some scenes are impressive visually, but because the actors have no idea how to act in these sequences, it turns a potentially scary scene into something silly. The film also makes the mistake of having its protagonist deliver “badass” one-liners, probably following the logic of “Nightmare on Elm Street 4: The Dream Master”. But unlike Freddy, who more or less made it work for him, they feel out of place and forced here. It’s almost surreal how odd everyone acts and moves in this movie and it kills whatever suspense there could’ve been. I personally blame the pretentious writing for a lot of this. It wants to be deep, but fails and the director deserves blame as well. The occasional bad actor in your movie is one thing, but a whole cast of them? That has to be the directors fault just as much as it is the actors. Yet as I said, at least it ended up being amusing. It’s strange that what damned the film also was its saving grace from being unwatchable. 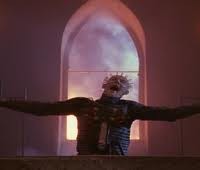 The direction is rather polished, with some nice angles, wide shots and even the occasional intense moment. I especially like this films startling gore sequences. The club massacre was awesome and what we see after the fact is even more chilling. I also thought the Vietnam scenes were rather effective and gruesome. In fact, I’m surprised there hasn’t been a Hellraiser movie that takes place in the war. I also am one of the few people who apparently liked the finale, even though yes, you’ll find yourself wondering why there is no one on the streets. Still, the explosions made me happy. But the use of post production effects are awful (this was during the awkward beginnings of CGI) and of course the director has no grasp of the actors performances at all. I think he has some talents, but because the film is mostly about people talking, he just never really gets the chance to show it off.

Strangely, I don’t hate “Hellraiser 3”. In a way, it was an interesting watch because it reflects what was going on in the horror genre at the time. The dialogue heavy sequences were so goofy primarily because everyone keeps a straight face while delivering their lines (poorly). Then when the actual horror begins, there is enough practical gore effects that are highly vicious that I found myself satisfied. The movie is pretty lame, but I think it is tolerable, sometimes for the right reasons. But mostly for the wrong reasons. I’m going to end this review with this. It’s a bad movie that occasionally does something right, but it’s badness is rather endearing once you get over your initial disappointment with the film. It’s a 1.5 star movie that I enjoy on a 2 star level, hence my rating.

Overall: If you want to see it, just expect to be amused at how ‘off’ everything seems, but perhaps you’ll also be pleasantly surprised by the messed up gore bits. It was easily the weakest of the films by this point, but would the franchise fall even lower?