Stupid, stupid MartialHorror. I’m not sure what deserves to be spat upon more. “Gone“, for being about as generic as the title suggests, or myself for knowing that it would be as generic as the title suggested, yet went to see it anyway. “Gone” is one of those movies that if you watch the trailer, you could probably figure out everything that’s going to happen and not often be wrong. When there is a movie like this and the execution of bland material is rather mediocre itself, why should one even bother with it? 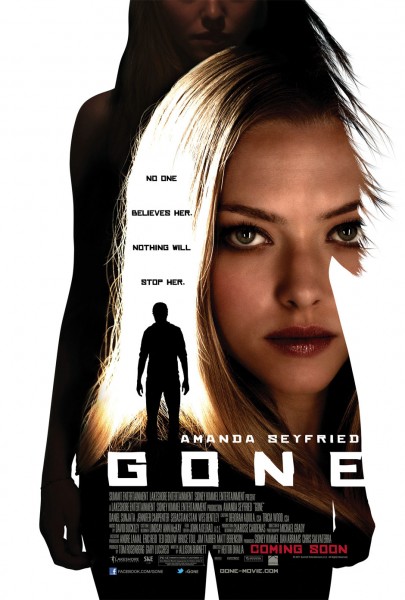 Plot: Two years ago, Jill (Amanda Seyfried) was found traumatized and nearly frozen. She alleged that she had been abducted and placed into a deep hole in the ground, which was filled with human remains. However, the Police never could find any killers or holes that would verify her story. Now she’s reserved and timid, but also forceful and paranoid. When her sister vanishes, she’s convinced that her attacker is responsible. But due to past issues of mental instability, the Police don’t believe her. So she has to track down the killer so she can rescue her sister by herself. But are they correct? Is Jill just going insane? Inane and predictable plot conventions ensue.

My main annoyance with “Gone” is that when the movie ends, I realized that the bulk of this film was not necessary. The structure is identical to the one found in “Taken“, which just has its protagonist tracking down a one scene character to interrogate them before moving onto the next, while also avoiding the law. In itself, this is fine but it forces the narrative to be linear. Actions films can use this effectively, suspense thrillers cannot. This is because we’re not watching just to see our protagonists kick some ass. We’re watching to solve a mystery. Is she insane? Is the killer playing a game with her, even if he exists at all? Is the killer this person? That person? The person in this scene? The person in that scene? It asks so many questions but then forgets that it asks at all. So let’s break this down.

1) Potential psychosis: The film suggests that our heroine might be delusional and that her entire abduction might’ve just been in her head. It continuously reminds us of this and honestly, this was the only idea that could’ve redeemed the story. The problem? The movie itself pokes too many holes in this theory from the beginning, so we can never really take the possibility seriously. In fact, having the police ultimately denounce her is where the films logic starts coming undone. We know- based off what we have seen earlier in the film- that their theories about where the sister is cannot be true. Did the sister just go out drinking? There is nothing in her demeanor that suggests she was about to fall off the wagon, Did she do it just to ‘get away’ like the head cop says? Once again, she seems happy and normal the last we see her. But the film treats these suggestions as if they are distinct possibilities! Eventually, the movie starts calling itself out on its holes, which almost becomes hilarious (the cops not searching very long in a park THAT big).

Furthermore, Jill is too lucid to be insane. She will threaten and maybe even harm some people, but it’s never unwarranted. If you sneak up on someone and grab their shoulder in that lameass cliched kind of way that’s so popular in horror films, you best expect to get your ass handed to you. When she threatens someone, it’s generally a calculated move. The only times we see mental instability is during some flashbacks, but during the present time she just seems overly determined. So all of that time spent on this concept was absolutely wasted! WASTED! 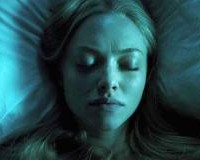 2) Suspects: With most thrillers, there are people whom we have to consider are wolves in sheep’s clothing. Who is the killer? Most mysteries need to balance the screen time amidst its sea of characters so that we won’t know whom the murderer is. The format here however has no time for this. Jill talks to one person, moves to the next. Most of the characters only show up for one scene. Yet each time the film is sort of indicating that this person is suspicious, although even it can’t decide whether or not it wants to go that route. Example, the first person she interrogates is described as being kind of creepy and when we see him, he is rather hostile and weird. So is the film trying to make us be wary of him? We know he won’t be the killer because mysteries don’t throw suspicion on the actual killer this early in the movie (unless it’s really smart about it, like “Scream“). We know that each time a person appears “suspicious”, all the movie is doing is proving to us that they won’t be the killer. So why is the film wasting so much of our time on this misdirection?

At times, I could’ve even figure out if the movie WAS trying to make someone a suspect. There are a few characters whom Jill never suspects, but seem rather suspicious to us. But most of these suspicions never even have any pay-offs. The person who seemed to be the most likely candidate sort of vanishes half way into the movie. I remember complaining about how “Red Riding Hood” made it too obvious who the killer was because he/she was the only character whom the movie did not treat as a potential suspect. This movie almost wants to do the same thing but does so without conviction, as if it knows we know what it’s trying to do so doesn’t want to bother. But 90 minutes has to be filled somehow, right? So these scenes are there anyway. By the time the killer is revealed, it confirms that everything we had witnessed prior was an utter waste of time.

3) Clues: This is one of the more harmless failures of the film. In fact, maybe I’m being a little too harsh here. My main complaint is it’s obvious that the killer is leaving some sort of a trail for Jill to follow, but Jill never seems to catch on. If he/she was leaving a trail (maybe they weren’t), then they’re taking a lot for granted. They’re presuming someone is awake all night and is likely to see what van they’re driving, or that Jill will go and talk to said person. They’re also presuming that there isn’t a sympathetic cop who will follow a lead based off the information they’re leaving around. If there wasn’t a trail (although I’m sure there was), then the killer is a moron for leaving that crap laying around. It’s all bad writing, because as resourceful as Jill was, she either overlooks the obvious or deduces the impossible. The killer is also presuming she is some sort of Sherlock Holmes with these hints. 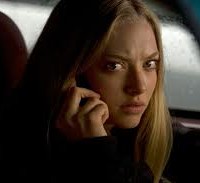 4) The Killer: Ouch, I can’t talk too much about this without spoiling it. So I shall only say a few things. The Killer is either incompetent or brilliant, but neither scenario fits. If it’s the first, then how did they evade the police for so long (and no movie, having someone ask this with no answer won’t diffuse the suckitude)? If it’s the second, then what the hell is up with the ending? It’s resolved in such a quick, abrupt fashion that one almost has to wonder if the killer was a mere plot device. But for what? The ending makes me wonder if the film wasn’t as lazy as I thought. Maybe they wanted to do a character understudy instead, or perhaps they were making a social statement about the police (the final conflict we’re left with). Or maybe like “Scream“, they wanted to trick us by pretending to be predictable. But if that’s the case, then the story was hijacked by a ‘by the numbers’ thriller, which makes the whole experiment seem worse. If it’s a conventional thriller, then that’s what it is. It would’ve worked fine on the small screen. But if it was trying to use our expectations against us, it failed because it just made for an unsatisfying experience. I was “ANGRY” at its revelations because they cheat the audience.

5) The sister: Actually, I had no problem with how the search went down. It even provided a nifty twist that I liked. Maybe they should’ve played up our protagonists skills in hand-to-hand combat, her intelligence and her willingness to cross lines. If it was an action-thriller like “Taken“, I think it could’ve been more enjoyable. Instead, we just get typical “cat jumps out of closet” scare sequences.

So…is there anything good about the movie? Yes, the actors all deserve praise for doing a solid job with their roles. Everyone is played by somebody I recognized (always a good thing), but Amanda Seyfried easily wins the day with her ranged performance. She’s strong, vulnerable, intelligent, flawed and I love how she seems genuinely terrified during the films best scene. There is a sequence in the park which leads to the finale that is actually sort of scary. Everything seems to click at that moment. Seyfried’s performance, the mysterious locations, the haunting cinematography, the spooky sound design, the perfectly paced editing…that scene creeped under my skin and if the entire movie was like this, then I wouldn’t care how conventional it was. Unfortunately, the rest of the direction is flat and the acting can only take you so far. Everything else about it was just a sloppy waste of time. The title is “Gone” dammit! What do you expect it to be!?

Violence: Rated PG-13. Nothing much.

Nudity: People in boxer shorts….that’s all I can remember.