Tim Burton was another great filmmaker who has lost sight of what made him good in the first place. Oh sure, his trademarks are still present, but they don’t seem to mean anything anymore. His earlier- and best- efforts were noted for their high octane Gothic imagery, their quirky, morbid sense of humor and their ability to have heart amidst its visual style. The movies were about people who felt (or were) isolated from the rest of the world. They had substance, damn it! But eventually Burton’s efforts started being less eccentric and more mainstream. While the visual style was still there, the humor became stale and the loner protagonist was reduced to a cog in a big machine. “Dark Shadows” is pretty much the embodiment of a true Tim Burton film these days. His touches are here, but they’re underutilized. 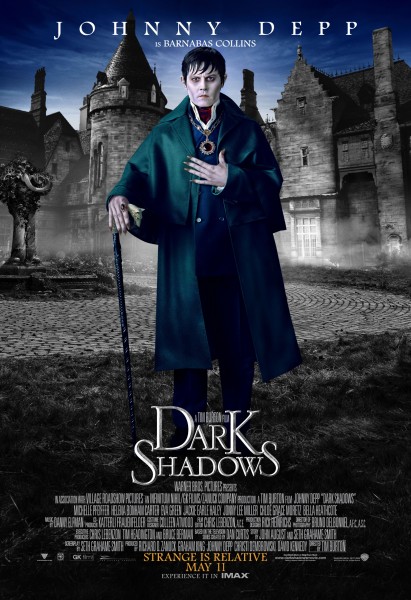 Plot: Barnabas Collins (Johnny Depp) is a wealthy lad whose family owns a prosperous fishing business. Unfortunately, his womanizing ways causes him to seduce and cast aside Angelique (Eva Green), a witch who uses her powers to kill his family, his girlfriend and even turn him into a vampire. He’s buried in a coffin for almost 200 years when he is finally released from his imprisonment.Now he must adapt to the 70’s, connect with his descendants, win the heart of Victoria (Bella Heathcote)- the spitting image of his lost love- and defeat the witch once and for all.

Before I begin, it should be noted that I have never seen the show that this movie is based on. From what I gather, it’s a horror-soap opera, which I guess automatically makes it the best soap opera ever made. Perhaps this 2012 movie was faithful and that is the problem. I don’t know, but there is way too much going on. It can’t balance out its cast of characters, but it tries and this causes everything to fall off the rails. Victoria is introduced to us and is established as a potential leading lady. This is a given, as her relationship with Barnabas is supposed to be important, right? But once they set her up, she mostly vanishes throughout the bulk of the film. She shows up here and there, so the film reminds us that she is the love interest. But the movie is more interested in the dynamic between Barnabas in Angelique. Oh my God, the (mostly) one sided romance between the villain and the protagonist was the only relationship that got any sort of depth. WHOOPS!

This is possibly because besides Johnny Depp, Eva Green stole the show from everybody else. So let’s discuss a positive aspect for a bit. I love the cast and everybody does a good job, or at least they do what they can with such limited material. Johnny Depp embodies everything I love about Johnny Depp. He can evoke a wide variety of emotions and is just so fun to watch, blending in so perfectly with whatever genre or tone the movie demands from him. “Dark Shadows” might lack the heart of earlier Tim Burton finer films, but Barnabas feels like a classic Burton character and Depp goes all out with him. Eva Green over-acts like mad crazy, chewing the scenery in what is not intended to be a pun in any sort of way. But I thought it worked and at the absolute least, she is entertaining. The rest of the cast includes Michelle Pfeiffer (Elizabeth Collins), Helena Bonham Carter (Dr. Hoffman), Jackie Earle Haley (Willie), Jonny Lee Miller (Roger Collins), Chloe Grace Moretz (Carolyn) and even cameos by Alice Cooper and Christopher Lee. This is a lot of talent and while they aren’t used to their full potential, everyone does a solid job. 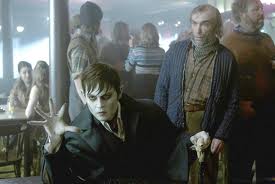 But there are so many characters, so there isn’t enough time for any of the relationships (that we root for) to matter. Barnabas and his descendants? Very little screen-time is dedicated to them individually. It’s even more frustrating because a lot of these characters aren’t necessary. Did we need Jonny Lee Miller’s character? Or even Helen Bonham Carter’s? If they cut the fat out, then they could focus more on the relevant stuff. Fleshing people out so they aren’t obnoxious cliches (Carolyn), developing relationships so that we care about them and of course, filling in the plot holes. They introduce a lot of subplots that never go anywhere, but it’s during the finale when everything implodes.. On one hand, it is actually sort of exciting, even if the resolution is forced. But there are a lot of twists that had no build-up whatsoever. Had the film dedicated a little more time to this, there might’ve been some spectacular revelations. But it didn’t, so it’s just an ass-pull.

Yet “Dark Shadows” still has a lot going for it. As one would expect from Burton, he goes all out visually. The Gothic and creepy manor is wonderfully designed, being so over-the-top that it border-lines on camp without descending into full campy territory. I also dug the contrast with the 70’s look and feel, even if this angle wasn’t explored enough. Burton makes use of fog, old school horror sounds and moody cinematography. It’s not his best looking film, but I wasn’t expecting it to be.Yet strangely, this wasn’t my favorite aspect of the film. What I adored the most was the humor. While it isn’t black enough and feels out-of-place with the horror driven sequences (which aren’t very horrific), the dialogue is generally witty and watching Depp have a lot of fun with the fish out of water scenario almost single handedly redeems the movie. I laughed a lot, whether it was from watching a 200 year old vampire hanging out with a bunch of hippies, discuss love with a rebellious 15 year old girl or quote 70’s songs as if they were poetry. I continuously was amused by the movies sense of humor, so I can’t say I was ever bored with it.

In retrospect, it’s hard to tell who “Dark Shadows” was made for, so I’m going to be a little harsher on the movie in terms of rating. The romance is so underdeveloped that even the “Twilight” crowd would call it shallow. Hell, even the “Red Riding Hood” group might shy away from it. There isn’t a lot of action. The horror moments aren’t scary because they rely on the actual attacks instead of the buildup, so it would’ve needed actual gore to be effective. So the horror fans won’t be interested. I personally enjoyed the films humor, but it’s more about wit and I don’t think your average film-goer will get it. So scratch off the younger crowd in general. All that’s left are oddballs like me and fans of the original soap opera, who I’d presume would understand this a lot more. But this is a shell of a Tim Burton film. It lacks a soul, which is also not meant to be a pun. I think the movie works in parts, primarily when it’s being a comedy, but not as a cohesive whole.

Nudity: Lots of sexual references and a violent pre-sex scene.

Overall: If it looks interesting to you, I think it’s good enough to give it a watch, but not at full price. Otherwise, I’d say it’s a stellar rental. I enjoyed the film on a 2.5/4 star level, but since the target audience is unclear….